So no, turns out it’s not a remake of the 1988 slasher movie starring Lyle Alzado, and it’s not based on a novel either. Writers Phil Hay & Matt Manfredi (CRAZY/BEAUTIFUL, THE TUXEDO, AEON FLUX, CLASH OF THE TITANS, R.I.P.D., RIDE ALONG, THE INVITATION), adapted it from the 1976 Kiss album of the same name featuring “Detroit Rock City” [citation needed].

Though it’s a very different look at L.A., it sometimes reminded me of THE LIMEY. As much as it’s about her barreling through motherfuckers to get to this guy Silas it’s about her guilt over her failures, including but not limited to the undercover assignment and her relationship with her daughter Shelby (Jade Pettyjohn, McKENNA SHOOTS FOR THE STARS), who hates her and chose to live with her ex Ethan (Scoot McNairy, BOBBY). But there’s more action than in THE LIMEY, including shootouts and many scraps. She rarely dominates in a fight – her style is generally to get thrown around and slammed against things, punched in the face and stomped on but keep clawing at it until she either pulls something off or slips away. In the case of security dragging her out of a sleazy lawyer (Bradley Whitford, ROBOCOP 3)’s mansion, she changes the dynamic of the situation by puking on the floor. Unintentional I think, but a good move nonetheless.

I like this version of messy, grounded fights. The stunt coordinator is Mike Smith (CUTAWAY, BLACK DAWN, ULTRAVIOLET, URBAN JUSTICE, PISTOL WHIPPED, MIRRORS 2, S.W.A.T.: FIREFIGHT, SEVEN PSYCHOPATHS, NEED FOR SPEED, NIGHTCRAWLER), who was the stunt double for Christian Bale on EQUILIBRIUM. Kidman’s stunt double Alisa Hensley has a nice history of doubling actresses who are on the taller side: Cameron Diaz in CHARLIE’S ANGELS: FULL THROTTLE, Kristanna Loken in TERMINATOR 3, Natasha Henstridge in SPECIES III, Rebecca Hall in IRON MAN THREE, best of all Elizabeth Debicki in WIDOWS. 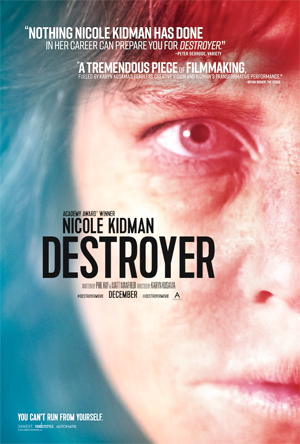 The overall tone is more Serious Gritty Shit than Here’s Some Fun Pulp For You Guys, so the more exaggerated-seeming touches come off a little comical to me. #1 in this department is that Erin’s cherubic sixteen year old daughter has a burly 29 year old street wear lovin slicked back hair and earrings boyfriend (Beau Knapp, NO ONE LIVES, RUN ALL NIGHT, THE GIFT, THE NICE GUYS) who brings her to bars and says he loves her and smiles arrogantly when mom confronts him about being an adult dating a little girl, then he threatens to sue her for hitting him and seems extremely, extremely proud of this maneuver, like now he’s got her where he wants her. Oh, and also he knows what Spokane is when Erin tries to bribe him to move there. So either he’s from Washington or he’s been on film crews, I guess.

Also the score by Theodore Shapiro (GIRLFIGHT, A SIMPLE FAVOR) is so heavy with SICARIO-esque dread that a couple times I found myself thinking “Okay, we’re just talking about a couple bank robbers here, let’s not get carried away.”

But if I’m correct that some of this comes off a little goofier than it’s supposed to then that’s okay with me, it kinda gives it personality. Kusama, having suffered after better-than-their-reputations-used-to-be Hollywood flops (AEON FLUX, JENNIFER’S BODY) earned new respect a couple years ago with the very good indie thriller THE INVITATION. Now she seems to have been re-evaluated and given the clout of an auteur. She does a good job of introducing little arty touches that I don’t necessarily understand without derailing an entertaining crime story/character piece. I did find myself scratching my head at some of the things that she chose as important enough to show in the final few minutes, including a flashback of Erin complimenting Sebastian Stan’s ass.

I enjoy this type of show-offy, chameleon style acting, like Tom Hardy and Christian Bale tend to do, or Charlize Theron in MONSTER. That’s not to say I found Kidman 100% convincing at all times – there are some cracks in the withered tough lady veneer. Part of her “you look like shit” routine is limping around pulling up pants that fit her like she stole them from a man, but she’s rocking a leather jacket that seems custom designed to her exact body shape. And for some reason I had trouble buying Kidman saying “C’mon, man!,” which she says more than once. It amuses me that they have her in two different time periods but don’t ever seem to have her playing close to her actual age. In the present she wears heavy wrinkle makeup, and in the flashbacks, on a case she’s said to be too young for, I’m pretty sure she’s not playing 50! From the fashions I thought she was supposed to be a cool Gen-Xer in the ’90s, but other plot details tell me it’s the early 2000s.

None of that’s a dealbreaker to me. It mostly works, and when it doesn’t it’s still fun to watch Kidman go so far out of her usual zone. I didn’t know Kebbell would be in the cast, so that’s a treat too. I’ve been a fan since I saw him in DEAD MAN’S SHOES, even though I didn’t love that movie. I feel like I still need to explain who he is: some of his unexpectedly great performances include Koba in DAWN OF THE PLANET OF THE APES (a motion capture role, obviously) and the redneck meteorologist hero of

. Here he’s the lead villain but is mostly off screen, much of his power coming from one flashback scene where he proves to be a creepily sadistic lunatic. He’s more like a cult leader than a gang leader, but not in an appealing Bodhi-in-POINT-BREAK type of way. Nobody will root for this asshole to get away. Also notable: he looks kinda hilarious as a ’90s longhair.

I thought the most effective transformation was Tatiana Maslany (DIARY OF THE DEAD) as Petra. In the flashbacks she’s a pretty rich girl but in the present her makeup, her walk and her voice so convincingly capture the wear and tear of years of addiction that I didn’t realize it was the same actress. Erin trailing her and trying to catch her is the most fun part of the movie. It has that thing I like when normal polite society is invaded by sudden berserk mayhem (see, for example, the opening of HAYWIRE where Gina Carano beats the shit out of Channing Tatum in front of everybody in a diner). These people are waiting in line for ice cream and Erin runs in, throws Petra against a wall, smashes her nose with a gun handle, slams her on the ground and they’re screaming and whacking each other like fucking savages. Erin yells instructions about locking the door and no one going anywhere and just before she exits, as an afterthought, adds “It’s okay, I’m a cop!” And it honestly seems like they might not have known up to that point.

Also I love that Petra is able to recognize this attacker she hasn’t seen in years and whine “Fuck you, Erin!” during the fight.

I believe this is Kidman’s BAD LIEUTENANT, and here’s how being a bad lieutenant changes based on gender: Harvey Keitel’s character pulls those girls over and jerks off in front of them. Kidman’s, unfortunately, has to do the jerking, when a terminally ill convict (James Jordan, WIND RIVER) sets that as the exchange rate for ratting on someone. Not fair. Not equal. And man I really wanted her to wash her hands at the end of that scene. Good scene, though. Weird shit. Not expected.

She’s bad not just because she’s a drunk and all that. She also seems to make bad decisions in some of her police work. There’s an amazing turn of events when she’s following Petra to try to get to Silas and suddenly realizes [SPOILER] they’re about to rob a bank. She calls it in and when the first two cops arrive she convinces them to go in with her and start shooting without waiting for backup. Totallly fuckin badass but also totally fuckin unsafe for her, them and all of the hostages. We’re not always sure she knows what she’s doing. But some things will make more sense later.

The more I think about DESTROYER the more I like it – not because it has some deep substance, but because it works as a couple different types of movies I like. First, it’s a crime story, a bit of a mystery, or a pursuit at least, with a gritty character running through a gauntlet to get what she wants, and it delivers on the types of tense sequences and strange encounters that make those stories entertaining. Second, it’s a story told with patience. It doesn’t tell us everything up front. It trusts that we’ll watch her journey, interested in piecing together what she’s up to until we’ve been given enough information to do that. And it’s not the structure we expect but it feels natural in the place it ends up. Third, it’s a movie about a flawed protagonist, kind of a nut, a person who we can like and root for but who’s unpredictable because we can’t always trust her to make moral or even wise choices, so we get the joy of “Oh shit, what is she doing!?”

That’s the sweet spot for me, the movies that balance between a solid take on their genre and a weird movie outside of their genre. Unusual, but not at the expense of being satisfying.

bank robbers Beau Knapp Bradley Whitford Jade Pettyjohn James Jordan Karyn Kusama Matt Manfredi Nicole Kidman Phil Hay Scoot McNairy Tatiana Maslany Theodore Shapiro Toby Kebbell
This entry was posted on Tuesday, February 5th, 2019 at 11:58 am and is filed under Crime, Reviews. You can follow any responses to this entry through the RSS 2.0 feed. You can skip to the end and leave a response. Pinging is currently not allowed.