Vern’s Been PISTOL WHIPPED By Seagal!

Vern’s my hero. If I could be anybody I wanted to be when I grow up, I’d choose to be Vern. His new book is one reason. This review is another.

This April marks (for death) the 20th anniversary of ABOVE THE LAW. Can you believe we’re that old? Two decades since Steven Seagal’s debut, arriving on the action movie scene fully-formed, already a star, already with his iconic look (well, he didn’t have the ponytail quite yet), already with his shadowy CIA past, his intense knowledge of Asian tradition, and his drive to take on the corrupt and throw them through panes of glass.

Alot has stayed the same in those 20 years, but alot has changed. He got bigger. His movies got bigger (UNDER SIEGE), then smaller (THE PATRIOT). He moved from the big screen to the DVD. By my way of thinking he’s gone through three major periods of his career and is now late in the DTV Era. 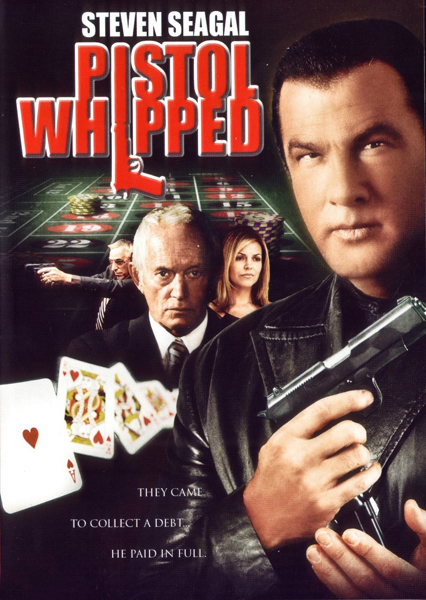 It’s been years since he’s gotten good reviews or mainstream respect (opening weekend of 2001’s EXIT WOUNDS to be exact), but that hardly matters. I’ve rarely met a Seagal-critic who could even name the movies he was trying to make fun of. What did matter was when Seagal started to disappoint his actual audience. Movies like OUT OF REACH were patched together with obvious voice and stunt doubles subbing for Seagal, SUBMERGED and ATTACK FORCE were sci-fi movies rejiggered to remove the mutants and aliens, leaving their stories muddled and incoherent. The last straw might’ve been last year’s FLIGHT OF FURY, where the producers tricked Seagal into making a movie with a script they’d already used for Michael Dudikoff’s BLACK THUNDER. Worse than that it’s built around Seagal flying jets, even though the audience will never forget he’s sitting in front of a green screen and not flying the jet in that stock footage. Shouldn’t he be throwing guys through windows?

But an aikidoist fights best when backed into a corner, so after Seagal’s recent low point he seems to be turning ferocious again. The first sign was last year’s URBAN JUSTICE, a vicious straight-ahead avenging-the-death-of-my-son movie with Seagal obviously redoubling his efforts. It was full of violent action, great one-liners, a surprisingly good villain performance by Eddie Griffin of all people, and plenty of fight scenes that prove Seagal still gives a shit. How much of a shit? Enough to kick a guy in the balls 11 times before throwing him down the stairs. 11 ball kicks = good effort.

The one thing I thought URBAN JUSTICE could use was more of the personal Seagal touch. It had the fast aikido asskicking and badass persona of Golden Era Seagal, but not much of the weird touches and heart-on-his-sleeve sincerity that makes Seagal’s movies Seagal movies. I thought if he could combine some of that with his newfound elbow grease he would have something, and I was right. He would have PISTOL WHIPPED. But PISTOL WHIPPED is not just recharged DTV Seagal, I think it shows signs it could be a new stage in his career. A new Seagal with a slightly more mature outlook. No, seriously guys, hear me out. (For justice.)

In PISTOL WHIPPED Seagal plays his most troubled character ever. He was kicked off the force because they thought he stole money. His wife threw him out because he was a cheat and a drunk. His best friend and partner married his wife. His daughter is disappointed in him because he’s always hung over on visiting weekends and ditches her. Also he’s addicted to gambling and owes over a million dollars to three different bookies. Oh, and also Lance Henriksen and Paul Calderon are forcing him to assassinate people for a secret government agency. And this makes things worse because sometimes he has to stalk people on the weekends he’s supposed to be with his daughter.

This might be a turn-off for some people, but PISTOL WHIPPED is much more story oriented than URBAN JUSTICE. It’s not lacking in mayhem and brutality, but it does spend plenty of screen time on concerns such as improving relations with his daughter. I like that because it’s new for Seagal. You gotta take advantage of what you have, and one thing Seagal has is the look of a guy who’s been through alot. Let’s see Matt Damon or Ryan Reynolds play a washed up alcoholic ex-cop trying to be a better father between assassinations. They’re not ready yet.

The media may get more and more obsessed with young, pretty, soul-less people every year, but that doesn’t change reality. The fact is that older people make better badasses. Seagal will turn 57 next month. Charles Bronson was older than that by the time he made DEATH WISH II. Lee Marvin I guess was in his ’40s for most of his best stuff but he got up there, he was about Seagal’s age now when he and Bronson did DEATH HUNT in ’81. By my math it looks like Clint Eastwood was 62 when he started doing movies like UNFORGIVEN, IN THE LINE OF FIRE and BLOODWORK that dealt with his age.

I think Seagal’s stepping into his version of that type of material now, or like what Stallone started with ROCKY BALBOA. Now he not only has his CIA/black ops backstory, he also has the backstory of his earlier movie career. Even if we didn’t know his past we’d see it on his face. So it’s great to see him finally acknowledging that in the stories. He’s now a veteran, a father of grown children, a guy who had a life once but screwed it up. In fact it’s a strong parallel with the status of his filmography. As his character (simply called “Matt” by the way) struggles to stop drinking and make his daughter like him again, Seagal is struggling to make better movies and get his fans excited again.

The thing is pretty well put together, too, with plenty of cool and ridiculous action to enjoy. Seagal runs slo-mo through a graveyard firing in different directions without even looking. He sets up a bunch of matches and lights them by grazing them with bullets. He stabs a guy with silverware. His most badass move (SPOILER) is at the end when he asks his fatally wounded former friend/current foe if he wants to be buried or cremated, and when the guy says buried he blows up his car. How often do you see an anti-hero kill the bad guy AND disrespect his burial wishes? Not often enough, in my opinion.

Before anybody gets too excited, I should mention that nobody gets literally pistol whipped in this movie. That may be an oversight but I think the title is a play on the term “pussy whipped.” He’s henpecked by his pistol.

Henriksen is only in three scenes, but he’s an important character and does have dialogue with Seagal. I’m a big fan of Henriksen, who seems to put his best foot forward even in the worst crap he somehow ends up in, so it’s great to see him finally cross paths with Seagal. But Calderon has a much bigger part so he gets the distinguished guest star trophy this time. If you don’t know Calderon by name you might still remember him from small parts in KING OF NEW YORK, BAD LIEUTENANT, COP LAND, CLOCKERS, OUT OF SIGHT, etc. Also I looked him up and it looks like he’s played about 7 different characters on various LAW AND ORDER shows. He’s the guy who almost played Jules Winfield but instead played the bartender: “my name is Paul, and this is between y’all.” He’s slick and wiry, a complete physical opposite of Seagal, so he makes a great nemesis and sort of colleague.

The script by J.D. Zeik (who wrote the original script for RONIN before David Mamet got his hands on it) is masterful DTV Era Seagal. It takes the sort of betrayals and shifting morality of Seagal pictures like THE FOREIGNER, BLACK DAWN, MERCENARY FOR JUSTICE and SHADOW MAN and forms them into a more cohesive and colorful story than before. This might be Seagal’s definitive statement on that “sometimes you gotta get your hand dirty” theme.

So there are all kinds of interesting things to analyze here, but more importantly I’ve watched it a couple times already and just enjoyed watching it. So, as one of North America’s leading Seagalogists I declare Steven Seagal officially back in business just in time for his 20th year as an action star. He’s gone platinum. Buy that man some china.

PISTOL WHIPPED hits the shelves next Tuesday, March 4th. ABOVE THE LAW turns 20 on April 8th. Read about both movies in WAY more detail in my book SEAGALOGY, available from Titan Books May 20th.

(whoah, I felt like Herc for a second there)

P.S. Random Seagal news: the trailer for THE ONION MOVIE – which has been sitting on a shelf almost as long as Mason Storm was in a coma – appears as an extra on the DARJEELING LIMITED dvd. Seagal’s part in COCK PUNCHER (a movie trailer parody) is featured prominently. The movie probaly won’t be funny but at least if they really release it on DVD it will stop being at the top of Seagal’s filmography on IMDb.

DTV Lance Henriksen Seagalogy
This entry was posted on Friday, February 29th, 2008 at 8:01 am and is filed under Action, AICN, Reviews, Seagal. You can follow any responses to this entry through the RSS 2.0 feed. You can skip to the end and leave a response. Pinging is currently not allowed.

5 Responses to “Vern’s Been PISTOL WHIPPED By Seagal!”