Seagal plays Jonathan Cold, “ex-CIA, current freelance operative specializing in covert operations and nuclear weapons intelligence.” He seems to be a bad guy because he’s hired to bust a guy out of prison and help him acquire the parts for a suitcase bomb. I never got the chance to realize this before but Seagal makes a good bad guy, always standing around, narrowing his eyes and grimacing like a henchman. He should look into that. 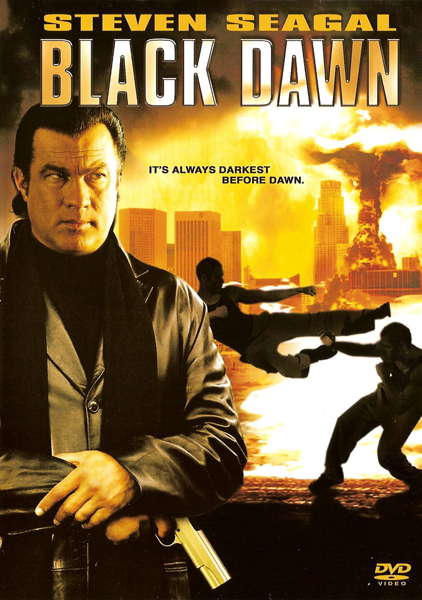 Meanwhile, a group of young, hip Chechen terrorists have been performing robberies, saving up enough money to buy the bomb and detonate it in Los Angeles as revenge for the CIA assassination of their leader. Also they probaly hate freedom. Whatever the motive, it’s gonna suck if they nuke L.A., so fuck this Jonathan Cold guy for helping them. What an asshole.

Or is he? Actually, it turns out he’s super top secret undercover for the CIA, “dedicated to doing work that’s probaly considered by most people to be immoral or illegal, nonetheless it’s stuff that we have to do in the interest of United States security around the world.” Usually Seagal plays something like an ex-CIA doctor or an ex-CIA firefighter, but now he’s an ex-CIA CIA officer. It’s good news for the citizens of the world that these terrorists are stupid enough to hire a guy they know is a tricky double, triple, quadruple backflip agent and then be surprised when he turns on them. Stupid terrorists.

The turning point is when a female CIA character apparently named Agent Amanda (Tamara Davies) gets in trouble. She’s been tracking the terrorists and Cold, who she thought was dead and who taught her everything she knows, including how to eat with chopsticks. She ends up getting captured and they’re gonna kill her, so Cold has to blow his cover by rescuing her. The bad guys of course act like they knew all along Cold would betray them and dryly say they are “disappointed.” Cold explains, “Shit happens, y’know.”

Now, I probaly shouldn’t go further without explaining that the character Jonathan Cold also appeared in Seagal’s 2003 picture THE FOREIGNER. (If you’re reading this from the future, please turn to Chapter 14 in your SEAGALOGY books.) That makes this Seagal’s only sequel other than UNDER SIEGE 2: DARK TERRITORY ten years ago. It’s also Seagal’s only movie with a flashback to another movie (the shootout and kerosene lamp fight in the cabin – unfortunately they leave out my favorite part, where he kicks a guy that he’s already set on fire). It’s a weird choice for a sequel because non Seagalogists have never heard of THE FOREIGNER and it’s also probaly the least popular Seagal movie among his fans. At least that’s the feeling I get from my buds over at steven-seagal.net (check it out, they got a picture of Seagal holding a baby panda).

I mean if he’s gonna be doing sequels I think we’d all like to see what happened to Forest “What does it take to change the essence of a man?” Taft from ON DEADLY GROUND. Did he ever get society to stop depending on oil? It would be interesting to find out. But I do think Jonathan Cold is a good choice for a continuing character too. He’s slightly different from other Seagal characters, more of a secret agent type with hints of James Bond style womanizing and a darker amoral side. In THE FOREIGNER it was actually kind of shocking how many innocent bystanders he killed – he even blows up a train station full of people to get one bad guy. Shit, I think this is like that movie SYRIANA that’s coming out, where George Clooney plays a CIA agent that has to do amoral things, and he gained a bunch of weight for the role. Speaking of which I don’t want to be mean but early in the movie Seagal is driving around and you can see McDonalds french fries and a Big Mac wrapper on his dashboard.

Anyway, I think fans will like this better than THE FOREIGNER because it’s not nearly as dull, but I gotta say that it’s equally complicated and mostly humorless. It’s also not as silly as the most entertaining Seagal pictures, but it definitely has its moments. There’s one scene where Cold and Amanda slo-mo jump through a window to escape. This shows how close they are as teacher and student because usually Seagal slo-mo jumps through a window himself, but here he shares the experience with a loved one. Anyway they land in the back of a dump truck that’s driving by. I have no idea who this motherfucker is that’s driving the dump truck. He doesn’t seem to be an innocent bystander because he leads the bad guys on a big chase and crashes through a bunch of random cars. But if he was there to rescue them, who was he, and how the fuck did he know to drive by at that exact moment? Whoever he is, he gets shot, and Cold just tosses the body out onto one of the terrorist’s cars! If it weren’t for skilled driving of that dump truck driver, Jonathan Cold really would be dead and L.A. would be a big hole right now. So I hope that guy gets a hero’s burial. I don’t think it will be open casket, though.

The most ridiculous part, and this is one of them spoilers you want to avoid so you can be surprised, is the way Cold deals with the suitcase bomb. It has a timer on it and it gets set off, so I thought Cold was gonna be like Seagal in TICKER, he would take a deep breath, “go beyond hope and fear” and “understand that death is just another stage on the playground,” then cut some wires and be over with it. But Cold apparently doesn’t know how to defuse a bomb, so instead he takes it in a helicopter and tosses it in the water.

No, seriously. There are even some fish there that they show swimming away from the suitcase, and hopefully they got far enough away before it blew up. Anyway, the bomb goes off and there’s a big splash of water and a mushroom cloud and the helicopter gets shook around a little but there are no immediately noticeable consequences. Cold says, “We could be glowin in the dark for a while,” so it is left a little ambiguous. I’m hoping we will get another Jonathan Cold adventure where he is terminally ill from the radiation or has unleashed RETURN OF THE LIVING DEAD style zombies or Godzillas or something. But when the credits roll it really seems like everything is okay. There’s no “Jonathan Cold will return in ON DEADLY GRAVES” or anything like that.

By the way it’s interesting to note that suitcase bombs are considered female, like boats. The scientist that designed it calls it “she” and later, in the helicopter, Cold says to “Open the door and throw that bitch out!”

Another thing I noticed, the American traitor who smuggles plutonium in a coffee mug and sells it to terrorists HAS A FULL SIZED FLAG POLE IN HIS FRONT YARD. What a phoney. As I often do I couldn’t help but think of Roddy Piper in THEY LIVE saying, “It fuckin’ figures.”

Like with TODAY YOU DIE, Seagal seems to be trying harder and drinking the Lightning Bolt because the movie doesn’t have the same obvious dubbing and blatant incompetence associated with most of his movies of the past few years. One major complaint though: he barely fights at all. In his only real martial arts scene, the stunt double is pretty much off screen, with only legs and arms visible, and he STILL looks nothing like Seagal. I actually had to rewind it a couple times to be sure Cold was supposed to be fighting and not somebody else.

I know everybody hates Amazon links, including me, but check out this cover!!! See that flying DRAGON: THE BRUCE LEE STORY kick there? That must be from the archives, there’s nothing like that at all in this movie. And surprisingly Seagal never wears that leather coat – he actually wears a suit and tie for the entire movie (a Seagalogy first). Also, as far as I could tell Amazon was incorrect in their statement that the movie stars Lorenzo Lamas. Unless the final DVD release is drastically different from my VHS screener.

Anyway, that’s it for now, but Seagal already has MERCENARY and SHADOWS OF THE PAST in the can, so I’ll be back soon.

p.s. If anyone is planning on buying me a case of Lightning Bolt for Christmas, I prefer the “Cherry Charge” flavor. “The Asian Experience” isn’t as good, but maybe you had to be there.

DTV Matt Salinger Seagalogy Tamara Davies
This entry was posted on Thursday, November 3rd, 2005 at 6:33 am and is filed under Action, AICN, Reviews, Seagal. You can follow any responses to this entry through the RSS 2.0 feed. You can skip to the end and leave a response. Pinging is currently not allowed.