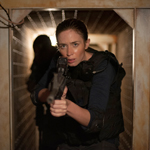 Our guide into Hell is Emily Blunt (EDGE OF TOMORROW, LOOPER) as Kate Macer, a new but talented FBI agent who raids a drug house in Phoenix and accidentally finds where a cartel has been stashing bodies. Next thing you know a meeting room full of mysterious higher-ups recruits her to aid in a vaguely defined interagency mission they say will lead her to the people responsible. She finds herself at an Air Force base with a couple dozen macho CIA, Delta Force and US Marshal tough guys who all seem to go way back and know exactly what’s going on and do this kinda mission in their sleep. And next thing you know they’re cruising over the border meeting up with militarized Mexican police forces and God knows who else. Nobody tells Kate anything. She just has to stay quiet and keep up.

There’s a bit of a TRAINING DAY thing here, with the added dimension of being a woman in a male dominated profession. She’s trying to hold her own, make a good show for her gender, her agency and herself, but there’s a constant stomach-sinking feeling that she’s being peer pressured into doing things that she doesn’t believe in. She’s being left out, lied to and betrayed, tricked into going along with illegal activities, used as bureaucratic cover or as bait. 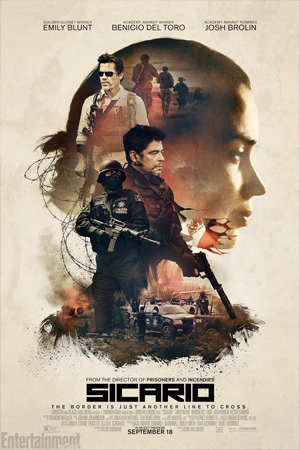 Josh Brolin (JONAH HEX, W., OLDBOY) as “D.O.D. consultant” Matt Graver and Benicio Del Toro (SAVAGES, THE HUNTED) as his enigmatic, cold-blooded “bird-dog” Alejandro are fiercely ambiguous characters. They take glee in intimidating Kate and tormenting their enemies. Alejandro seems to be infamous and feared. He sticks his dick in a guy’s face during an interrogation, his finger in a guy’s ear (that made me wince), they’re unimpressed by the horrors they see, uninterested in laws, willing to torture, to kill, to beat up our heroine. But also they get her back at times, save her life, and seem sincerely intent on stopping the murderous cartels. You definitely don’t want to be their friend, but I’m a little less sure if I want them completely out of business.

As much as SICARIO is probly About Something, it’s the surface level pleasures of an intensely cinematic procedural that make it great. That our surrogate is being tossed into deep waters and rarely knows what the hell is going on makes it more harrowing. A churning, industrial sounding score by Jóhann Jóhannsson (PRISONERS, THE THEORY OF EVERYTHING) taps us in the gut as she rolls with the squadron, riding a caravan of five black SUVs right through the border, meeting up with an army of Mexican cops riding vehicles like War Boys, zipping into the city of Juarez, past a line of naked, decapitated bodies hung from a freeway overpass like executed pirates. Roger Deakins’s matter-of-fact photography of such nightmarish imagery hits some previously unknown intersection between documentary realism and Hieronymous Bosch.

The in-the-thick-of-it-without-having-to-shake-all-over-the-damn-place camerawork reminded me of the opening kidnap sequence from John Hyams’ UNIVERSAL SOLDIER: REGENERATION. Another movie that comes to mind was mentioned by Hyams himself:

SICARIO is my favorite kind of movie, executed to perfection. Maybe as great a filmgoing experience as the first time I saw HEAT.

It feels more real than choreographed, but without being any more visually confusing than it would be if you were there. One particularly tense sequence plays like an ambush in an Iraq or Afghanistan war movie, except it takes place in gridlock on the U.S. side of the border crossing. We’re stuck between the team’s goal of killing their attackers and Kate’s appalled astonishment that they’re having a firefight with unknown assailants in a crowd of civilians. Causing rambunction throughout the sphere.

There’s another big sequence that takes place inside a tunnel built under the border. This is kinda off topic but it reminds me of an article I read about some Canadian drug dealers who built a tunnel under their border. They got caught because the neighbors noticed them doing hard work, which was out of character. The cops watched them for years bringing lumber into their greenhouse and never bringing it out. They let them build the whole thing and use it before busting them transporting pot. They did time here in Seattle and should be out some time around now. Man, they are gonna be pissed when they find out that pot is legal here now.

But yeah, I know, somebody bigger than them had to have funded that thing, and they probly would’ve used it for something more nefarious than just weed. Good guys don’t do a construction project like that, and tunnels built secretly by nefarious forces are an underutilized element in this type of movie. You only got two directions to go and you don’t know what’s gonna be on the other side when you get there. It’s an intense scene.

SICARIO also reminded me quite a bit of ZERO DARK THIRTY, and it’s kinda about the same thing: a very determined and underestimated woman navigating her way through a complex war where laws and morals are blurry, revenge is tempting and nothing seems to be fixable.

Kate is a great character because she’s a badass but not a fantasy. Blunt has tough eyes but a skinny body, she’s not Ronda Rousey. So whenever she fights a man she’s eventually overpowered. The joy is in the ROCKY style victory of knowing she put up a good fight, and sometimes threw the first punch out of principle. And it’s the same way with her head-on collision with a questionable system of justice. In the end by my interpretation they’ve achieved their objective and not a damn thing has changed. But at least she can hold her head high.

Also (SPOILER), points for letting her nice partner survive the movie! And for another small but memorable appearance by Jon Bernthal.

Man, it didn’t take Villaneuve long to rocket up the chart of most interesting working directors. We’re gonna have to keep an eye on this dude.

Benicio Del Toro cartels Denis Villeneuve Emily Blunt Jon Bernthal Josh Brolin Mexican border Roger Deakins War On Drugs
This entry was posted on Monday, October 19th, 2015 at 8:46 am and is filed under Action, Crime, Reviews. You can follow any responses to this entry through the RSS 2.0 feed. You can skip to the end and leave a response. Pinging is currently not allowed.