So no, turns out it’s not a remake of the 1988 slasher movie starring Lyle Alzado, and it’s not based on a novel either. Writers Phil Hay & Matt Manfredi (CRAZY/BEAUTIFUL, THE TUXEDO, AEON FLUX, CLASH OF THE TITANS, R.I.P.D., RIDE ALONG, THE INVITATION), adapted it from the 1976 Kiss album of the same name featuring “Detroit Rock City” [citation needed]. END_OF_DOCUMENT_TOKEN_TO_BE_REPLACED 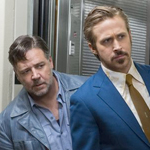 That’s because this is the latest from Shane Black, as both director and writer (with Anthony Bagarozzi), so it’s a twisty, complex mystery, a serious detective story but with frequent laughs from characters doing the wrong thing or the weird thing or saying what you’re not supposed to say. Goofing on tropes but also respecting their usefulness. END_OF_DOCUMENT_TOKEN_TO_BE_REPLACED