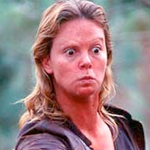 This is a love story. Aileen, going by Lee, decides rather than kill herself one rainy day she’ll take her last five bucks to a bar and get a beer. And this lonely young woman Selby (Christina Ricci, CASPER) approaches her, talks to her, buys her a pitcher. Aileen protests at first – “What is this, a gay place?” she had snorted to the bartender earlier – but she can’t really pass up a person being nice to her. Too rare.

Aileen’s had a real rough life. A prologue, playing like nostalgic home movies, shows her exposing and prostituting herself at a young age. This of course means she was raped and abused. Now she’s living out of a storage unit, getting beat up by boyfriends and johns alike, spending alot of quality time sitting under the overpass with a gun to her head thinking it all over. It seems like her only friend is Thomas (Bruce Dern, THE DRIVER), who runs the storage unit, is lenient about her being behind on rent, and gives her a beer and most of his ham sandwich. He’s so nice you worry he’s gonna try to pull something and disappoint her horribly. I wonder if maybe he was supposed to and they realized that would be too bleak. Or maybe they wanted to have one man in the movie who doesn’t try to exploit her.

So Aileen hangs out with Selby, who’s clearly younger and lives with a nice Christian family after her old man kicked her out for trying to kiss a girl. And now they catch her sneaking this gruff, weathered prostitute into her teen girl type bedroom. 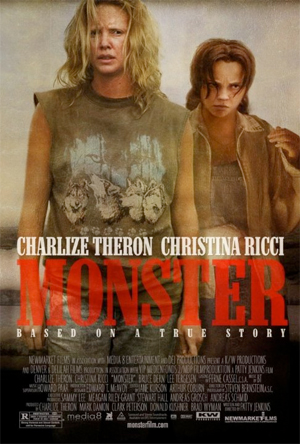 Theron carries herself kinda masculine, swears and grunts and does a Southern accent. She has an angry, fuck you attitude, but Selby brings out her positive side. This plays as a real romance. She cleans herself in a gas station bathroom sink with somebody knocking angrily on the door, but she spends extra time getting her hair just right, smiling at herself in the mirror. Everything but lip synch oldies into a brush. She takes her to the rollerskating rink. It’s open, so it’s not as awkward as when Rocky brings Adrian to the ice skating rink.

The trouble comes from another romantic gesture. Selby is about to be sent back to her father, and Aileen wants to rent a hotel to have a night alone with her before she goes. She tries to hustle up the cash in a day, taking john after john. It’s kinda like one of those montages where they do car washes and bake sales and collect cans and pawn all their shit to get enough money to save the youth center or whatever and they’re real optimistic and energized but at the end they count it up and it’s just not enough and they get depressed. It’s like that but it’s a different method of raising money and then at the end instead of it not being enough this john handcuffs her and beats her up so she gets his gun and kills him. Then she does a poor job of explaining herself when she shows up hours late for her date, in the car she stole from the dead guy. But she convinces Selby to run away with her.

She tries to get out of prostitution. There’s a painful montage of her interviewing for jobs. She seems to naively believe she can be whatever she sets her mind to, that all the jobs are open to her now that she wants them. Selby doesn’t want to tell her she’s delusional. Because of our familiarity with this kind of sequence the various bosses who crush her dreams seem like snobs keeping a regular woman down. But of course they should not hire her. She’s applying for jobs that require skills she has no clue about, and also whatever elitist assumptions they might’ve made about her are probly less than the truth that she’s a prostitute on the run from a recent murder.

So it’s back to hooking and a series of decreasingly convincing justifications for killing johns and stealing their cars. I don’t know if she realizes it’s a reverse of so many serial killers who get away with it for a while because their victims are prostitutes and are not as protected by society as some other people who get killed. In a way this works the same, because your sympathy for the innocent people killed is mixed with a little “ew, he was hiring her to have sex with him.” But, I don’t know, maybe there’s a double standard, because she got caught after about a year.

It’s kind of a female-female version of the murder spree road movie. Usually it’s a guy who’s out of control, and feels he’s in some sort of rebellion against society, and has a poor smitten girlfriend hopelessly devoted to him.

In both movie and reality, Wuornos may have really believed her victims were going to rape her and that it was self defense, but it seems to only be true in the first of her seven murders. In the movie when she’s sentenced she says, “Thank you, judge. And may you rot in hell! Sending a raped woman to death! And you all, you’re a bunch of scum that’s what you are!”

I don’t know if that’s a real quote or not, but that’s the Wuornos we knew before, the one that made outrageous outbursts in court and interviews, often blaming society for her troubles:

“You sabotaged my ass, society. And the cops, and the system… a raped woman got executed. It was used for books and movies and shit. You’re an inhumane bunch of fuckin’ livin’ bastards and bitches and you’re gonna get your asses nuked in the end, and pretty soon it’s comin’!”

Nick Broomfield’s documentary AILEEN WUORNOS: THE SELLING OF A SERIAL KILLER shows us what happened after MONSTER, as a bizarre group of characters exploited her case while she just wanted to go to the chair and get it over with. (When she finally did, shortly before MONSTER came out, her last words referenced the movie INDEPENDENCE DAY.) She comes off as compelling and sort of sympathetic just because the other people in the movie are such scumbags. And we hear what a rough life she had. But Theron’s performance goes further. She’s full of shit and there have been plenty of other people who lived terrible lives without having to kill a bunch of people. But also she can be sweet and she tries to be this protector and provider and she demeans herself to feel like she’s bringing home the bacon for this girl she cares about. People, she reminds us, are not unstoppable forces of evil. They always turn out to just be humans.

This was the feature debut of writer-director Patty Jenkins. She won the Independent Spirit Award for best first feature (also nominated for best first screenplay) and of course she deserves credit for directing Theron’s Oscar winning performance, but it didn’t immediately launch her into a big movie career. She found work in TV, directing episodes of Arrested Development, Entourage and The Killing. Eventually Natalie Portman convinced Marvel to hire her for THOR: THE DARK WORLD, which would’ve been the biggest budget live action movie ever directed by a woman (topping Kathryn Bigelow for K-19: THE WIDOWMAKER) had she not left for “creative differences.” Portman was thinking about quitting acting to raise her kid, and they lured her with the involvement of Jenkins. Reportedly Jenkins was actually fired, and Portman only found out about it by reading it in the news, so she was not happy!

But now Jenkins is directing WONDER WOMAN so I think she’ll get that record. MONSTER being a small true crime drama about horrible murders it’s hard to say how it will translate into the satin tights fighting for your rights and what not. But we do know that Jenkins can make a movie that’s all about characters and acting, which is a plus. It will give some emotional grounding to the invisible plane in my opinion.

Bruce Dern Charlize Theron Christina Ricci Patty Jenkins serial killer true crime
This entry was posted on Tuesday, April 19th, 2016 at 11:17 am and is filed under Crime, Drama, Reviews. You can follow any responses to this entry through the RSS 2.0 feed. You can skip to the end and leave a response. Pinging is currently not allowed.