The young guy is Nick Walker (Ryan Reynolds, BLADE TRINITY), in life a Boston PD detective betrayed by his partner Bobby Hayes (Kevin Bacon, ELEPHANT WHITE) over some kind of gold treasure they stole from a crime scene. Nick was having regrets and wanted out so Bobby shot him in the face during a raid. Instead of Heaven or Hell, Nick goes to RIPD to continue as a cop and help them round up “deados” who illegally stick around on Earth. Not really a noble calling, in my opinion.

He takes the job in hopes that he can see his wife Julia (Stephanie Szostak, IRON MAN THREE) and he snoops around and spies on her and tries to talk to her and also sees that she seems awfully close to his old partner and he has to learn that they are of different worlds and can no longer be together. So in that sense it’s exactly like SPAWN.

Nick and the audience learn that dead people can sometimes stay among the living, not as ghosts but just looking like normal people until they smell Indian food (?) and then they stretch out into weird, rotted monster guys. I think if I was a little kid I would’ve thought that was pretty cool, and that is the best thing I can say about this movie. 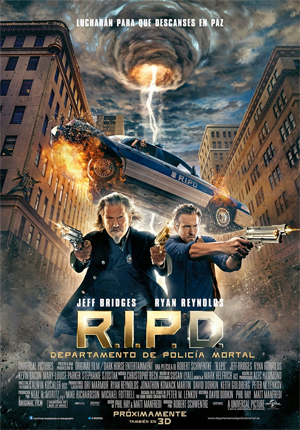 Nick’s new partner is Roycephus Pulsipher (Jeff Bridges, TRON LEGACY), a U.S. Marshal who died in the Old West. Bridges does the marble-mouthed Rooster Cogburn thing and laments having seen his skull fucked by a coyote. When Nick refers to him as a rebel he says “I fought for the North.” When Nick questions why he would eat hot dogs even though he doesn’t need food and can’t taste it, he says “I enjoy the mouth feel!”

There are occasional ideas I liked. One of the dead guy snitches they deal with (Mike O’Malley, SULLY) basically haunts Fenway Park because all he cares about is the Sox. Robert Knepper from HARD TARGET 2 also plays a so-called deado, as does Devin Ratray from BLUE RUIN and/or HOME ALONE.

Less fun is this SHALLOW HAL gimmick the filmatists seem way too confident about where we see them as Reynolds and Bridges but the living see them as James Hong (TALONS OF THE EAGLE) and Sports Illustrated Swimsuit Issue model Marisa Miller. To me it’s never funny and every time they go back to it it seems more painful. Ha ha, some guys sees hot-lady-Roycephus in the middle of a chase and they straighten their ties and it plays “Let’s Get It On” for a second. You get it because they think he’s a hot lady but he’s not a hot lady though he’s Jeff Bridges.

The creature effects are the movie’s most notable feature. These realistically textured, cartoonishly proportioned mo-cap grotesques bring to mind the effects in BIG TROUBLE IN LITTLE CHINA and, in fact, DEAD HEAT, the buddy-cop-undead-people movie you could argue it was indebted to more than the more commonly cited GHOSTBUSTERS. But they’re more off-putting because they’re computer generated and do not always move like real people – they leap around and flip and run up walls and shit. It’s gotta be an intentional choice to animate them like cartoon characters instead of trying to capture real motion. I respect that it’s different, but I don’t think it entirely works. They even have Bridges moving like a cartoon character when he swings on a rope in a big chase scene with a giant guy running up a building with his belly and buttcrack hanging out.

I cannot recommend this picture. I’m not saying you’ll get nothing out of it, but I am saying you won’t get enough. And the MEN IN BLACKness really is beyond the pale. I mean it’s the brazenness, it’s how recent the movie series is that it’s ripping off, it’s also that, if you ask me, the real MEN IN BLACK is only an okay movie in the first place. I know many people hold it in higher regard than me but I don’t think anybody thinks “this style of movie is so perfect that I would love to see the exact same shit with just slight tweaks to everything to pretend like it counts as its own thing.”

Director Robert Schwentke had previously directed another mediocre movie based on a comic book that nobody I ever heard of ever heard of, RED. The screenplay is by Phil Hay & Matt Manfredini (THE TUXEDO, CLASH OF THE TITANS), story by those guys and David Dobkin (director of WEDDING CRASHERS and shit). So, I mean, this is not that much of a surprise I guess. The creator of the comic book, Peter M. Lenkov, is only credited as a producer and as creator of the source material, but he’s a screenwriter with a credit on a far better movie than this: DEMOLITION MAN. He also wrote UNIVERSAL SOLDIER II and III.

To promote the movie there was an animated short that aired on Adult Swim. It’s more like an animated trailer explaining the concept than an actual short.

There was also a video game, R.I.P.D.: The Game, released for Windows, Playstation 3 and Xbox 360.

It was not well received.

R.I.P.D. was considered a major flop, grossing more than $50 million less than its reported budget. In its opening weekend it got smashed by three other movies it opened against: THE CONJURING, TURBO and RED 2. Yes, R.I.P.D. was beaten by a different Ryan Reynolds movie where he plays a cartoon snail, and by the sequel to its own director’s previous not-great movie. (DESPICABLE ME, GROWN UPS 2 and PACIFIC RIM, all in their second or third weeks, also did better.)

Schwentke continued somewhat unfazed. He followed this with INSURGENT and its two sequels before somebody noticed that nobody has ever watched any of those movies so they pulled the plug on it and so far the world has been okay. Hay & Manfredini followed this with the much more financially successful mediocrity of RIDE ALONG 1, 2 and 3. They also snuck in one well reviewed low budget movie, Karyn Kusama’s THE INVITATION (having previously written AEON FLUX for the director).

Bridges followed this up with more weird, not warmly welcomed by viewers shit, THE GIVER and SEVENTH SON, before an Oscar nominated turn in HELL OR HIGH WATER. But I don’t think this failure was ever gonna hurt him. He’s Jeff Bridges. Everybody loves Jeff Bridges. Nobody blames him. He did what he could.

Reynolds might’ve been in more danger. He’d played comic book characters before, always running into walls. He was funny in BLADE TRINITY, and that was the end of the series. X-MEN ORIGINS: WOLVERINE wasn’t his fault, but what happened to his character (actually played by Scott Adkins post-transformation) was probly the most hated aspect. And then he was GREEN LANTERN. After this one crashed and burned too it could’ve been the end of it. Luckily he finally got his long-in-development DEADPOOL movie off the ground – complete with smartass first person narration like this one – and that was a giant hit, so now he can write his own checks.

So hopefully he’ll put that new clout behind getting them to make R.I.P.D. 2.

That’s a joke and if they do I reserve the right to sit that one out please thank you for your consideration.

David Dobkin Devin Ratray James Hong Jeff Bridges Kevin Bacon Matt Manfredini Mike O'Malley Phil Hay Robert Knepper Robert Schwentke Ryan Reynolds Stephanie Szostak Summer Flings
This entry was posted on Wednesday, August 30th, 2017 at 10:17 am and is filed under Comic strips/Super heroes, Reviews. You can follow any responses to this entry through the RSS 2.0 feed. You can skip to the end and leave a response. Pinging is currently not allowed.