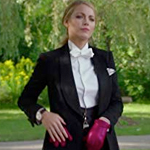 Stephanie (Anna Kendrick, THE ACCOUNTANT) is a widowed “mommy vlogger” who, in between cooking and crafting demos, has been filling her subscribers in on the disappearance of her “best friend” Emily (Blake Lively, GREEN LANTERN). Even from the bits of vlog we see, before the omniscience of cinema kicks in, this seems fishy, because she admits she’s only known Emily for a few weeks. Their sons are in school together and tried to set up a playdate, causing intimidating fashionable rich mean lady Emily to begrudgingly bring Stephanie to her (extremely modern) house after school for drinks. 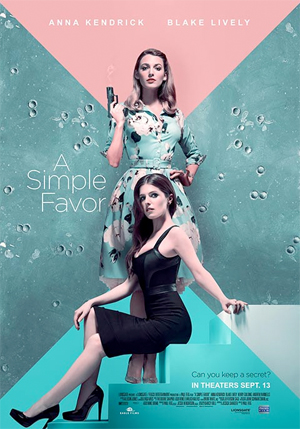 The heart of the movie is the attempted friendship between these opposites. Stephanie is what they call “basic.” A dork. She’s self conscious enough to constantly be awkward and embarrassed, but not enough to stop herself from blabbering about the different animals available on Target socks or the “oopsie jar” she fills with coins when she swears. Emily by contrast wryly complains about everything, loves drinking and chewing out her boss over the phone, makes Stephanie uncomfortable with frank talk and naked pictures, and constantly looks amused by her.

Lively genuinely gives one of my favorite performances of the year, a potential villain magnetic enough to steal my sympathies from the nicer protagonist. She always seems above everything, especially rules and expectations – societal, legal, even fashion, because she specializes in wearing outfits that normal people wouldn’t be able to get away with. But she does it with the charisma of a cult leader, so instead of making her seem like a jerk she comes off as an inspirational figure. She keeps telling Stephanie not to apologize for anything, which is a warning sign that she doesn’t care about other people, but she gets away with it because Stephanie, like many women, is too apologetic for her own good.

Emily is a female equivalent to the lovable asshole anti-heroes of so many movies, especially in the ’80s. She’s a mess and a terror and she sometimes convinces me yeah, but she earned it. She’s chaos on expensive name brand heels, so much so that when she gets Stephanie to pick up her kid from school and then is unreachable and seems to have taken off to Miami it takes days before it seems more likely to be an emergency than a scam to get free babysitting.

Emily’s ridiculously handsome husband Sean (Henry Golding, CRAZY RICH ASIANS) is out of town, but flies home and Stephanie, being the mommy vlogger, helps him look after his son, winds up living in the house, making fancy meals, trying on Emily’s dresses, denying her attraction to Sean. We know unless there’s some real narrative fuckery going on (apparently the book does use unreliable narrator tricks) that Stephanie is an innocent bystander in all this, but now she’s starting to act a little bit single white female. And the kid, Nicky, gets all “You’re not my mom!” and, more ominously, keeps claiming to have seen his real mom.

Much like the widows in WIDOWS, Stephanie finds she has talents she never would’ve thought of before – remembering Emily’s Never Say You’re Sorry lessons in not giving a fuck she pushes her way into Emily’s place of employment, breaks into her office, starts following clues and doing detective work, and it gets twisty in an outlandish way. Not WILD THINGS level, but fun.

The casting of small parts is as good as the big ones. I was impressed by Emily’s fashion designer boss (Rupert Friend, HITMAN: AGENT 47) and his minions, who look exactly the highest level of on-the-nose before pushing over into parody. And Feig’s Freaks & Geeks star Linda Cardellini (KILL THE IRISHMAN) has a good scene as a tough girl painter. It also looks good and has a legitimate tone of danger and mystery except, in my opinion, a major (if brief) tonal misstep right at the climax. We’ve built up real suspense and excitement about who will prevail between two compromised anti-heroines and then out of the blue another character intervenes with an out-and-out silly comedy one-liner. The ANIMAL HOUSE style text updates at the end also seem to have come from the broad comedy that Feig so carefully avoided making through 99% of the running time.

Yes, the soundtrack of ’60s French pop tunes (lots of Serge Gainsbourg and Brigitte Bardot) gives the whole thing a quirky upbeat feel, and there’s a really funny scene where Stephanie expresses her feelings of empowerment by rapping along with the M.O.P. classic “Ante Up” in her car, but for most of the movie it feels like the mystery and suspense are the important part, so the jokey-ness right at the end seems like it crosses a line to me.

Still, A SIMPLE FAVOR is worthwhile for these two performances and characters in the middle. I have enjoyed Lively in SAVAGES and THE SHALLOWS, but this definitely moves her up my list of interesting actors to keep an eye on.

Anna Kendrick Blake Lively Henry Golding Linda Cardellini Paul Feig Rupert Friend
This entry was posted on Wednesday, January 23rd, 2019 at 10:54 am and is filed under Reviews, Thriller. You can follow any responses to this entry through the RSS 2.0 feed. You can skip to the end and leave a response. Pinging is currently not allowed.

11 Responses to “A Simple Favor”