The original MIRRORS (Alexandre Aja’s American remake of the Korean movie INTO THE MIRROR) was a pretty good little b-movie. Kiefer Sutherland played a troubled night watchman at a fire-damaged department store who starts seeing creepy things in the building’s mirrors, causes his estranged wife to believe he’s lost his mind, solves a mystery and faces down a curse or something. But that story left alot of questions unanswered, for example “What if a different troubled individual worked as a night watchman in a different not-currently-open branch of the same department store chain where a different bad thing happened, so he has to solve a different mystery about what the mirror wants, and kind of on a smaller scale as if it were being filmed on a smaller budget?” 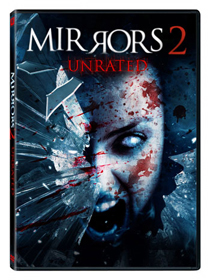 Nick Stahl (John Connor #4 [after “Old John Connor” Michael Edwards, “Infant John Connor” Dalton Abott, and Edward Furlong, before Thomas Dekker and Christian Bale]) plays Max Matheson, who’s been depressed and on medication since his fiancee died in a car accident. Actually she started out the trip as his girlfriend, but he proposed to her in the car, she said yes, and then the moment was quickly spoiled when he wrapped the car around a telephone pole and they both died (but he was revived).

So now he’s alone and obviously blames himself (and will never try another wild romantic gesture again) but for some reason his dad (William Katt from CARRIE, but I didn’t recognize him with his new hair do), the owner of the Mayflower department store, thinks the best thing for him would be to spend every night alone in a spooky building where the last guy went crazy and nearly killed himself chewing on broken mirrors. I mean I know his dad means well, but I don’t think he’s thinking this through too well. Even if there was no supernatural mirror curse I just don’t think that’s an environment for fostering a positive mental attitude, in my opinion.

By the way, 8-MILE was on TV last night and I watched part of it, and I had forgot about Jimmy Rabbit’s dorky friend Cheddar Bob, so I was happy to see that Cheddar Bob is the guy who eats the broken mirror in MIRRORS 2. Welcome back, Cheddar Bob.

Right away Max starts catching glimpses of a girl (with ghoul makeup) in the mirrors at work. His therapist thinks it’s not that big of a deal, but Max thinks it’s visions form beyond death because he was half past dead in that accident. Meanwhile some of the other employees of the not-yet-open store are gorily murdered by their own reflections.

One of the things I enjoyed in MIRRORS was the way Sutherland had to try to convince his family of this crazy supernatural menace, but they know he has a past of substance abuse and other problems so when he starts painting over all the reflective surfaces in their house they think he’s lost it and react accordingly. Part 2 skips over that. He has to convince a stranger whose sister is missing that he’s seen her in the mirrors. It’s hard to believe that it’s not that hard to believe, and this actress (Emmanuelle Vaugier) is not really up to the task of selling something like that. But the movie does start to pick up around then. I like the way the mirror tells him what it wants (the reflection of his flashlight shines, bounces off other mirrors and points at what it wants him to look at). The story wraps up pretty neatly and quickly for a reasonably satisfying conclusion, and wisely doesn’t repeat the cool ending of part 1.

The best thing about the movie is a couple of over-the-top brutal deaths, clearly taking inspiration from the jaw-breaking and leg-shaving of part 1. That makes it feel kind of forced, and there’s a very questionable digital shot involved, but the deaths are still amusing in their horribleness. I mean, you gotta respect a slipping-in-the-shower-decapitation. That’s an ambitious pratfall.

The worst thing about the movie is the familiarity. Every time there’s a mirror you just watch the reflection waiting for it to do something, and you usually don’t have to wait long. So there’s not alot of time to be in suspense and get creeped out. Like so many DTV sequels the main problem is that it doesn’t justify there being a sequel. You gotta really come up with some crazy new twist on the idea, otherwise it just seems like what it is: the same thing done not as good for less money.

So I figure it’s gotta be above average for a DTV sequel to an Americanized remake, but I’m not gonna go much further than that. On the other hand it does have the original Korean movie on the flip side of the DVD, that’s pretty cool, because I’m sure most people who rent it won’t have bothered to see that. I speak from experience, and I still haven’t seen it. But maybe you’ll be more responsible.

DTV DTV sequels Nick Stahl William Katt
This entry was posted on Tuesday, October 19th, 2010 at 1:35 am and is filed under Horror, Reviews. You can follow any responses to this entry through the RSS 2.0 feed. You can skip to the end and leave a response. Pinging is currently not allowed.