Man, you guys have been trying to get me to watch this one forever. Now I’ve seen it, so I’m not sure what’s next on the list. Paddy Considine plays Richard, a soldier back in the small English town where he grew up, planning some kind of a revenge. We know this because of the first line of the movie: “God will forgive them. He’ll forgive them and let them into Heaven. And I can’t live with that.” So he’s basically the Christ equalizer, the guy who goes around pre-emptively un-forgiving people before Jesus shows up to forgive them. It could be called THE UNFORGIVER. 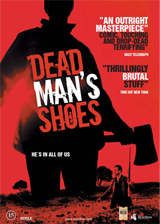 Richard walks around town with his mildly retarded brother Anthony, staking out a group of small time criminals who are hanging out at a small diner and who I got a pretty good hunch will soon be enjoying a revenge sandwich. These guys don’t have many illusions of being tough. They sell drugs but don’t always carry guns. They drive around together in one goofy Volkswagen like some old ladies carpooling to the church picnic.

Richard begins his revenge just by fucking with them. He gets in a confrontation with one at the diner, then ambushes him hours later in a completely different location to apologize. The ol’ “on the surface he’s being really cool but due to the context he’s actually planting the seeds of terror” trick. It gets crazier when he starts spooking them Michael Myers style wearing a gas mask. He lures them outside, then trashes their apartment and steals their drugs in the few minutes when they’re looking for him. When they go to tell their boss Sonny what happened the next morning he answers the door in clown makeup that he doesn’t realize Richard put on him while he was asleep. This is all to make them notice him and remember who he is – Anthony’s brother. Whenever they say it the room is draped in an “oh shit” silence.

The best moment in the movie is when Sonny goes to confront Richard. Sonny tries to be the pretending-he’s your-buddy-but-you-know-he’s-actually-threatening-you type villain. He says, “You know, the lads got this funny idea–”

“Yeah it was me,” Richard interrupts.

Richard’s fearlessness is maybe a little suicidal, but also justified by the gang’s incompetence. They have plenty of chances to take him out, but they always screw up or get scared and run away. He seems to have some Vorheesian offscreen murdering skills, but his plan is not air tight. If they were better shots or less cowardly he wouldn’t succeed. At one point he even stands with his arms out offering to let them shoot him, and they don’t take the chance. He’s not Rambo. It’s just that his enemy is sub-Dennehy.

I like Considine in the movie. It’s a good psychotic avenger performance. And I also gotta give credit to Toby Kebbel, who plays the brother. He does a good job of seeming genuinely mentally challenged without going over-the-top on any of it. I’m not familiar with him from other movies so I almost wondered.

I also like the tone of it. There’s alot of humor in the dialogue and the reactions of his victims, but it’s not jokey. I like that it’s a low budget movie shot in a small town and they make the criminals small time to fit. They don’t pretend Sonny is Scarface. He might think he’s a little more Scarface than he is, but nobody else is fooled. He’s just some dipshit that wronged the wrong guy. 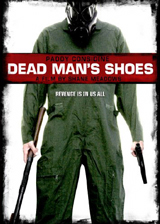 It’s also kind of clever to mix of genres. The backstory is revealed a piece at a time and there’s quiet musical interludes. So it’s kind of like a crude lower budget version of a brooding arthouse revenge movie like THE LIMEY or GET CARTER. But it also has  a few slasher elements in the way he turns into this masked stalker. But that might’ve given the marketing people the wrong idea. I don’t know about the American DVD cover (left), that might be part of why I didn’t see this sooner.

I definitely recommend this one, but I also gotta tell it like it is with frank honestness and everything, so I have to admit that this is not getting a 100% Badass sticker from me. It’s at about a 97, which is a respectable number. The missing 3% is because there’s just a pinch of too-corny-for-my-tastes here. When he talks about how his bloody revenge makes him a monster like it’s some unexpected ironic twist it makes him seem as stupid as his enemies. And I already wasn’t really gonna side with this guy based on the sadistic way he says he’s gonna let a guy go and then doesn’t. Not that they should turn him into a hero, but the man-isn’t-it-fucked-up-how-crazy-he-is thing was real old by 2004 when this came out. I mean, if that’s what you want maybe put a trenchcoat and some mime makeup on this guy so I know what I’m getting into.

Also, when it finally reveals what exactly happened that he’s getting revenge for it’s pretty convoluted and ludicrous. I’m not quite buying this one. I guess at least it’s one I hadn’t seen before. But just so you know, makers of revenge movies, I’ll always go for “you killed my friend or loved one.” You don’t gotta get this exotic.

But I don’t want to be too harsh. It’s a unique movie, not trying to copy any of the various popular styles of crime movies. I liked it. Now you can get on me about watching some other movie. (not tv show, I know what that one would be.)

Paddy Considine revenge
This entry was posted on Friday, March 12th, 2010 at 8:20 pm and is filed under Crime, Reviews. You can follow any responses to this entry through the RSS 2.0 feed. You can skip to the end and leave a response. Pinging is currently not allowed.