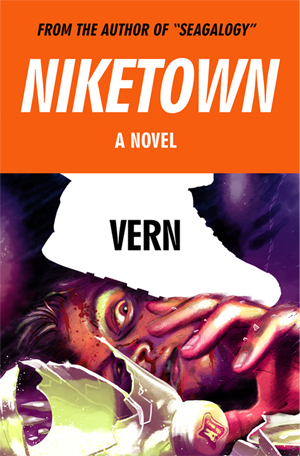 Fresh out of prison for stupidly robbing a corporate shoe store, Carter Chase knows it’s time to clean up his act. But can he pay the rent, find his missing brother and adjust to the crassly commercial modern world without flipping his lid and busting a few heads? Spoiler: No.

“Takes a familiar genre – the crime thriller – and twists it around on itself… subverts expectations at nearly every turn, and not just for the sake of being clever… Niketown is a funny, ambitious first novel… if you’re in the mood for a story that plays with your expectations in an intelligent way, seek it out.”

“This isn’t the sort of thing that gets read in upper-class literature classes fifty years from now, but it’s the best damn thing I’ve read in months.  I bet that vern could have written a straight-up hard boiled crime thriller if he wanted to, but he didn’t, and it’s even better this way. ”

“It was just fun to hang out with Carter in the same way that it’s fun to ‘hang out’ with Vern when you read his reviews.”

WHERE TO BUY NIKETOWN:

has it in real book or electronical Kindle book

Smashwords has all the electro-book formats

Createspace is who makes the book

Here’s the post where I originally announced the book and explained it.

(they also did an interview)