Until recently I was the guy who had never seen POINT BREAK. But the other day I busted my cherry on that matter, pardon my French, so I’m some other guy now.

I’m sure you’ve already seen it but let me refresh your memory: Keanu Reeves plays the perfectly named Johnny Utah, college football hero turned fresh-faced FBI rookie teamed with Gary Busey (in one of the first roles of his Crazy Post-Motorcycle Accident Period) to track down a gang of bank robbers who Busey (correctly) theorizes are surfers.

So Johnny Utah learns how to surf, immediately meets the group of surfers responsible for the bank robberies, and then continues his undercover work without realizing at first that these are the guys. The leader is Bodhi, played by Pat “ROADHOUSE” Swayze. 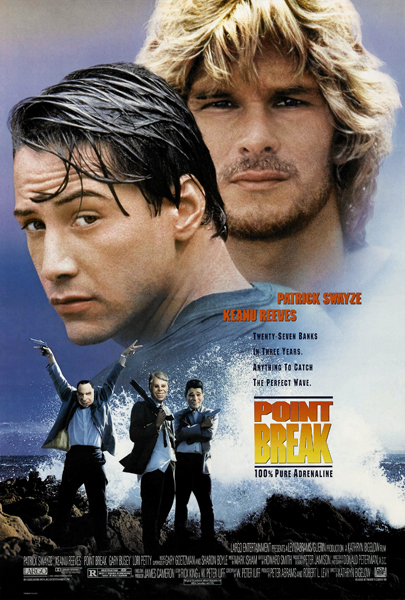 This is not one of the greats but it is surprisingly effective, and that’s because it’s got all the pieces in place. The pre-SPEED/MATRIX Keanu is actually pretty bad in the movie, even undercover as a surfer, but everyone else is perfect for their roles. Busey is at his crazy best. John C. McGinley (ON DEADLY GROUND) plays the uptight FBI chief. Lori Petty is an unorthodox choice for the surfing instructor/love interest. The director is Kathryn Bigelow, the talented but mostly forgotten badass woman director, who makes it all look real nice and knows how to shoot some good chase scenes and what not. The movie is even produced by the famed Jesus graverobber and Titaniphiliac James Cameron. So this has a pedigree.

This is also one of those action movies of the late ’80s, early ’90s that has all the ridiculous macho dialogue full of quips and boasts. They don’t really make this kind of movie too much anymore. For example, McGinley is always saying shit like, “You’re a real blue flame special, aren’t you, son? Young, dumb and full of come, I know. What I don’t know is how you got assigned here. Guess we must just have ourselves an asshole shortage, huh?”

The most impressive scene is the first skydiving scene, where you clearly see Swayze jump out of the plane and float in the air, for real, no special effects. At this point in the movie Bodhi has figured out that Johnny Utah is a cop, and he says don’t worry, he knows how to handle it. And he surprises him and pressures him into skydiving. It’s a long, show-offy sequence so you have alot of time to worry about what he is trying to pull. He must’ve sabotaged the ‘chute, right? No. Or he’s gonna cut his ‘chute? Or trick him into crashing into a cliff? Eventually they land safely and Johnny is so full of adrenaline he just starts whooping and hollering and seems to no longer be worried about what Bodhi has planned for him. And because Bodhi’s character is such a weirdo I was actually convinced for a second there that that was his plan. Don’t worry, he’s an undercover cop planning to bust us, so I’ll show him the thrill of skydiving and he’ll see the light and let us go.

Of course, that’s not his plan and at this point he turns into a truly evil character, but I like that the scene can take you back and forth so many times.

But the most important element of the movie by far is Swayze’s performance. And this is probaly not gonna be too popular, but I have no choice but to defend Mr. Swayze in general. This is a guy who gets all kinds of shit and elicits the mockery of young ironists because he had a funny hair style and did some corny movies. And I agree, the shit is funny. But you also gotta be honest with yourself in the eyes of the Lord and admit that this guy is fucking great in these movies. He had already made his name in girlie movies like GHOST and DIRTY DANCING, so it was almost impossible to take him seriously as an action star. But he actually had the chops. In ROADHOUSE he was a fuckin badass. A hilarious, ridiculous philosophy-spouting badass, but you could tell he was really doing those moves, the guy was a panther. In this one he is actually less laughable because he fits the part of a surfer dude so well. He’s a god damn Adonis who somehow manages to find excuses for kickboxing on the beach.

But that physical stuff isn’t the most important thing. The reason I say this guy is great is because you can tell he believes what he’s saying. There’s no doubt about it, he put everything he had into these roles. If you watch him on the extras for this DVD or for ROADHOUSE you see that even to this day he takes the corny philosophy of his characters completely seriously, he really lives by those codes. The same goes for that movie TO WONG FOO, where he’s in drag, and he plays it serious just like Divine in POLYESTER. He doesn’t camp it up, he plays it like he’s just a regular house wife. Like he doesn’t even know he’s in a movie, that’s just his life.

So yes, laugh at Patrick Swayze, but give him some respect too.

Another thing that hit me is that, as over-the-top as the movie is, the idea of a group of surfers who rob banks is not all that far-fetched. The idea of them being thrillseekers so they surf, skydive and rob banks is pretty simplistic, but there is some small amount of truth to it in my opinion. For some reason it reminded me of this guy they caught in Olympia, Washington several years ago. I’m not sure if I ever wrote about this before but there was a guy who had robbed alot of banks, they called him Hollywood because of all the crazy disguises he wore. And apparently he was a real charmer, he would flirt with the tellers kind of like George Clooney in the beginning of OUT OF SIGHT, and they would always mention that he was really good looking when the police interviewed them.

He managed to rob I don’t know how many banks without ever firing a weapon. Sometimes that would mean he really didn’t carry bullets, but it turned out this guy did. Because eventually of course he wasn’t able to get away. They chased him into somebody’s trailer where for the first time he fired his gun, into his own head. When they figured out who the guy was it turned out he was an eccentric carpenter who lived in a treehouse. I mean, not like a children’s clubhouse, but an actual house he had built himself in a tree. It had been featured in newspapers and architectural magazines as “the treehouse with a guest room.”

You know what, I just looked it up and it turns out Ann Rule wrote a book about the guy called The End of the Dream. So you should probaly read that instead of my vague memories of the newspaper articles from when it happened. Or wait for them to adapt the book into a movie starring Patrick Swayze.

I also wasn’t aware, since I hadn’t seen this movie before, how much THE FAST AND THE FURIOUS lifted from it. They have the same basic template: straightlaced pretty boy (Paul Walker instead of Keanu) goes undercover with group of thrillseekers (street racers instead of surfers) with charismatic leader spouting macho philosophy (Vin Diesel: “I live my life a quarter mile at a time. Nothing else matters: not the mortgage, not the store, not my team and all their bullshit. For those ten seconds or less, I’m free.” Swayze: “This was never about the money, this was about us against the system. That system that kills the human spirit. We stand for something. We are here to show those guys that are inching their way on the freeways in their metal coffins that the human sprit is still alive.”) The cop has a sort of brotherly bond/enemy fear with the leader, and strikes up a relationship with a woman close to him (sister instead of ex-girlfriend) and they come to a manly emotional confrontation at the end.

Of course, FAST AND THE FURIOUS does have two big variations on the way the story is told that I liked. First, they skip over the wacky “learning how to street race” sequences by not telling you until a ways into the movie that Walker is undercover. (SPOILER for FAST AND THE FURIOUS.) And at the end they do what you kind of wish they would do in POINT BREAK, they have him bond with Vin Diesel enough that he lets him go and himself is a fugitive in part 2. (SPOILER)

At the end of POINT BREAK Bodhi dies surfing a giant wave (SPOILER) which sort of wipes out (get it, pun) the opportunity for an awesome sequel. I wish he got arrested at the end so they could do a part 2 now where the CIA has pinpointed the location of an Osama bin Laden type terrorist, but they only have a 48 hour window to get in and there’s a huge storm that is causing the most awesome waves on record. And the only way to get in is to send someone who can surf those mothers. So they let Bodhi out of prison and he redeems himself, it’s just like RAMBO, except with surfing.

Or you could also do it where prison has just made him worse, he’s totally Charles Manson crazy now but there’s a big flood at the prison and he manages to escape by surfing over the fence on a makeshift prison surfboard. So the only way the authorities (Gary Busey) can catch him is if they recruit the one guy who understands how his mind works, retired FBI Agent Johnny Utah. They track Utah down in South America somewhere. He has a huge bushy beard and he lives in a yurt, earns a humble living making hand-carved flutes, but they convince him to come out of retirement to track down Bodhi.

Well, since Bodhi seems to die at the end I don’t think you can go that route so instead they gotta say he really didn’t die. He washed up on an island near New Zealand or somewhere, he realized the error of his ways and settled down with a nice Maori woman and started a family. Meanwhile, Johnny Utah, having quit the FBI, became more and more bitter and eventually decided to start robbing banks wearing a Ronald Reagan mask himself. Somehow Bodhi finds out and realizes he has to catch Johnny so he can show him the error of his ways and teach him the beauty of family.

As you can see by my need for a POINT BREAK sequel, I enjoyed this one. It’s not necessarily my favorite type of movie, but it’s a type of movie I miss. If only today’s dumb action movies could be as fun as the ones of yesteryear.

Busey Kathryn Bigelow Keanu Reeves Patrick Swayze
This entry was posted on Tuesday, April 17th, 2007 at 5:49 pm and is filed under Action, Crime, Drama, Reviews, Sport, Thriller. You can follow any responses to this entry through the RSS 2.0 feed. You can skip to the end and leave a response. Pinging is currently not allowed.