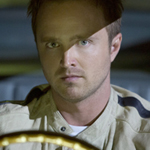 It’s another story that takes place among characters who think of nothing but car racing. There are signs of relationships in their pasts and futures, but women seem to be only a side interest for both the hero and the villain. The hero barely hides his sadness that his ex-girlfriend is with the villain now, yet we barely see her with her new man, she shows no sign of affection toward him and it’s unclear, to me at least, whether her diamond ring means they’re married or engaged. And it doesn’t seem like it really matters anyway because… cars.

The movie revolves around the small town of Mt. Kisco, New York. That’s a real town (or village) with a population of 11,000. It’s the home town of Michael Eisner and Bruce Jenner, and according to the movie they also have such a thriving street racing scene that one driver has gone on to fame and fortune as an Indy 500 racer and international automotive mogul, and among the current racers are a guy just a few years younger who’s legendary around the world, and several others almost as good as him. 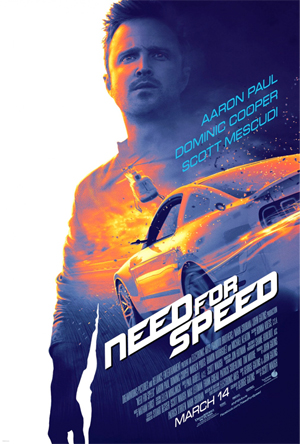 Pops has recently passed away, leaving his best-in-the-world custom race car garage to Speed (Aaron Paul), but he’s behind on the loans. Spritle and Chim Chim have probly gone off to college or something so now his family is a handful of goofball buddies who he treats as his brothers. There’s a couple mechanics (one always chews a toothpick, even at funerals), a friend named Benny (I had no idea this was that rapper you hear about, Kid Cudi) who flies borrowed/stolen Cessnas, news choppers and Apaches over him to give him the lay of the land during races, and there’s fresh-faced Pete (the double-last-named Harrison Gilbertson), little brother of his ex-girlfriend, who is always smiling and could not be more clearly destined to die tragically in a race creating motivation for revenge, triumph, etc.

Like a FAST & FURIOUS, the crew are depicted as having a special bond and code of honor. When Dino Brewster (Dominic Cooper), the bigshot asshole who left town, offers their on-the-verge-of-going-out-of-business garage a gig that will net them $500 grand, the crew all try to talk Speed into turning it down, because Dino’s an asshole. I like these guys. He doesn’t listen to them, though.

Then there’s the unwritten rule that if somebody flips his car and catches on fire during an illegal race you should turn around and try to help, not keep going and win the race. Pete dies from Dino bumping him during a dangerous race and causing him to flip, but what really offends Speed is that Dino didn’t go back for him. I mean, the poor kid flipped like 100 times, was on fire, fell off a bridge into water and blew up, so it would not have helped in any way, but you gotta make the gesture, you know? Worse, Dino lies to the cops about the whole thing and Speed goes to prison for 2 years for supposedly stealing the car Dino loaned him for the race.

I wonder if Sebulba felt this way about Anakin leaving him in a fiery wreck during the Boonta Eve classic. That’s from Star Wars.

By the way, even without this being in a Paul Walker series it was hard for his death not to come to mind when so many cars flip and burn. I know that sting will fade away just like anything, but it makes me wonder how FAST 7 will navigate the line between not being upsetting and delivering on traditional fast and furiousness. You want to be tasteful but you also want to honor the flavor of the series that he spent so much of his career developing. (For me real life also intruded in the fantasy world the first time Benny dove a newscopter down to street level. One of those crashed and blew up near where I live a week or two ago.)

When Speed gets out his system of revenge involves betting and racing. He convinces the rich guy who owns the $2.7 million world’s fastest Mustang (which he and the boys fixed up themselves) to loan it to him. Also included in the loan is the rich guy’s assistant Julia (Imogen Poots), adorable little Brit who looks like a Disney caricature but (gasp) knows alot about cars. Now they just have to drive across the country really fast and try to get entered into a legendary underground race run by the mysterious race expert The Monarch (Michael Keaton in a part that is literally filmed entirely in one radio studio, sometimes on a webcam) and then win the race and also he might figure out a way to prove that Cooper was there the day Pete died.

Since he’s breaking parole the police are after him, and also in one part some guys in trucks come after him because of a bounty, and also they’re trying to get The Monarch’s attention with outrageous driving, so there are many excuses for chases and going off jumps and what not. Unlike a FAST & FURIOUS movie there is no high speed backwards driving. Like a FAST & FURIOUS movie there is a part where they have to climb out on fast moving cars and reach across to each other. The funny thing is they don’t do this for some life or death battle, they do it to load gas into the car without slowing down because they’re late for the race.

I feel like the handling of the villain Dino makes very little sense. When he’s interviewed about Speed coming after him he plays dumb and says “Didn’t that guy just get out of prison?” But isn’t it on the public record that “that guy” is in prison relating to the death of Dino’s own brother-in-law (or soon-to-be-brother-in-law, whichever it is) and that he himself was accused and cleared of being involved? Shouldn’t he be expected to follow this case more closely?

Overall the values of the movie are positive. It sides with the guys with money problems who are passionate about what they do and value friendship, and against the rich successful asshole who doesn’t care about those things. But there’s one part early on where they’re racing and a homeless man is pushing a shopping cart full of his belongings out into the street, and Speed crashes into it. The homeless guy is outraged and yells “Hey, that’s my house!” Benny, who’s above in the plane and is supposed to be on the lookout for bystanders like that, jokes about it and laughs. It’s not a big deal, you see that all the time in movies, but I wonder what it is that makes them think of some destitute mentally ill person as the one who needs to get taken down a notch. “You know what, we should have a fucking homeless guy and his few meager belongings get destroyed and then he gets all upset about it! Ha ha, fuck that guy! Ha ha!” I know they don’t mean it that way, but if you think about it that’s kinda the subtext.

Oh well, maybe it’s not that bad. I didn’t hear any response from the homeless man who was the only other person attending this showing. I should’ve asked him his opinion when I saw him in the restroom afterwards, washing himself in the sink.

The climax is kinda funny SPOILER because, as one would expect, Cooper’s car flips and catches on fire, and Speed decides to be the bigger man, follow his code and turn around to pull him out of the wreckage. But when he does it, all of his friends are watching on their laptops and iPads (from hospitals, brigs or nearby) and yelling “What are you doing?” Like they don’t share this code, can’t even conceive of it. And even he takes an awful long time to turn around. It’s definitely not his first instinct, it’s something that comes to him after a bit, and then he has to think about whether or not to do it, and he only gets there at the last second. One more intense rubbing of his chin and both of them would’ve blown up in the car.

I still like it as an emotional beat, but it’s funny that the movie seems to think he’s Jesus or something for reluctantly doing what we’ve been told since the beginning of the movie is clearly the only thing anyone should ever do unless they’re a scumbag.

NEED FOR SPEED is directed by Scott Waugh, one of the two “Bandito Brothers” who went from stunts and sports documentaries to ACT OF VALOR. Therefore it has tons of real car stunts and few noticeable effects shots. Cinematographer Professional Shane Hurlbut, obviously still suffering from Post-Christian Bale Stress Disorder, doesn’t quite screw the camera down tight enough for my tastes, but he manages to capture alot of good vehicular mayhem, mostly coherent. Surprisingly though this is a 2 hour and 12 minute movie that takes its story and characters pretty seriously. Whether they deserve it or not is another question.

There are definitely a few overlong scenes that coulda used a cut. The obvious example is the long, out-of-place comedy scene about one of his buddies quitting an office job by stripping naked and leaving the building.

It’s kinda cool to see an action vehicle based around Aaron Paul. I’m pretty sure this will be the last one. He seems to have approximately two times the amount of forehead of your usual leading man (wouldn’t that be crazy if he dated Mena Suvari?) and probly wouldn’t be getting roles like this if not for the huge popularity of that show he was on. He does have a good low voice, but he seems more comfortable doing a dumb stoner laugh then trying to talk real serious. But that’s what makes him stand out.

In a world where there are six great FAST AND THE FURIOUS pictures there’s not that much need for NEED FOR SPEED. The FASTs after the first one also have alot of real stunt driving, but do more enjoyably ludicrous things with the cars than this does. The FASTs obviously have that theme of brotherhood and creating a new family with your friends, and they do it better with more likable characters. I know they’re different types of movies, but it’s not like NEED found some radically new twist on this type of material. It’s just a not-as-exciting version.

But it’s not terrible. I somewhat enjoyed watching it. On its own merits it’s okay. As far as movies adapted from Tom Cruise catch phrases it’s probly in the top 5. 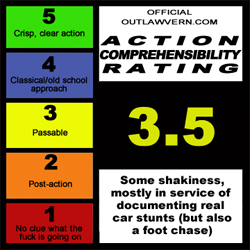 Aaron Paul car chases Dominic Cooper Imogen Poots Kid Cudi Rami Malek Scott Waugh street racing video games
This entry was posted on Tuesday, April 8th, 2014 at 10:27 am and is filed under Action, Reviews. You can follow any responses to this entry through the RSS 2.0 feed. You can skip to the end and leave a response. Pinging is currently not allowed.

31 Responses to “Need For Speed”