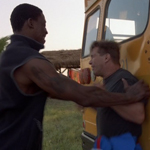 How’s this for a pitch: it’s POINT BREAK meets DROP ZONE and TERMINAL VELOCITY! Stephen Baldwin plays an over-the-edge customs agent who, like Keanu Reeves’s FBI agent in POINT BREAK, goes undercover with a group of (non-surfing this time) skydivers who he suspects of being involved in drug smuggling. And like DROP ZONE and TERMINAL VELOCITY it’s about this whole subculture of skydivers who live like a family or a tribe with their own stupid lingo and traditions that they’re real proud of. For example “cutaway” is their term for somebody (for example a hot shot lawyer) leaving behind their previous life to just be one of these parachute gypsies for now on. And of course that takes on extra meaning for Baldwin’s character, who is here with a secret agenda that he’s gonna be tempted to cutaway from as he becomes accepted by the group.

You want to know how we know Baldwin’s character Agent Vic Cooper might be psychologically unfit for another undercover mission? Because the movie opens with his computer file that tells us that: 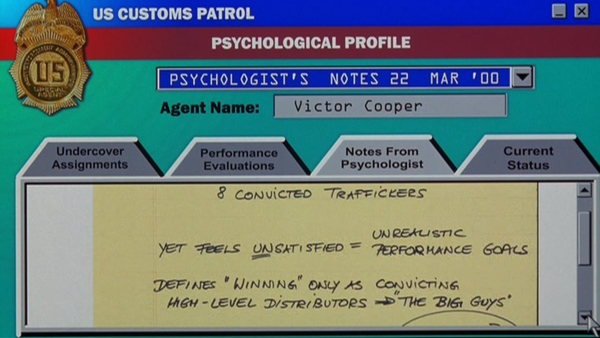 Our TVs become the computer screen of Vic’s Lieutenant Brian Margate (Ron Silver) as he scrolls through the file and then types in his override code in order to give Vic the assignment anyway. Note that according to the psychological profile Vic’s biggest problem is “unrealistic performance goals,” because he makes huge busts and wants to make even huger ones. Basically, he’s too awesome! 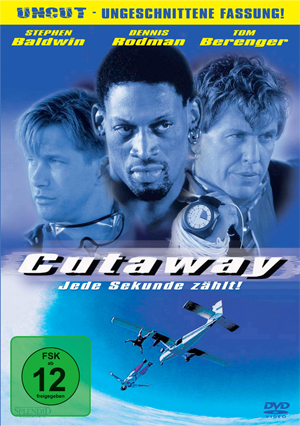 If you don’t believe the report, he will shortly prove how awesome he is when some neighbor boys trick him into thinking their friend is in trouble, so he parkours up the side of a building. (Their friend turns out to be a GI Joe doll.)

Because he’s so awesome he kind of goes off on his own and does things his own way. We know this because he rides a motorcycle. He makes up his own mission and retroactively hassles the Lieutenant into tentatively backing it against his better judgment.

The trouble he’s been having is that he got real close to busting some smugglers, he was there when they loaded a plane, but somehow the drugs were removed before it landed. He decides they were removed by a skydiver named Turbo (Dennis Rodman) who is connected to this particular school, so he goes to take a lesson there. He meets Star (Maxine Bahns, THE BROTHERS MCMULLEN) and immediately starts leaning in uncomfortably close like he’s gonna kiss her. And it’s kinda weird how much she responds to it.

Okay, so if he’s able to be an amazing skydiver, maybe he will impress this girl and she’ll pay attention to him, maybe they’ll go on a date, they’ll really hit it off, they’ll fall in love, he’ll reveal his true self and she’ll forgive him for the deception and they’ll go off and get married and have sex in mid-air and have children and grow old together. Or you know, whatever. And also he’ll get close to Turbo and maybe solve the case if he has time.

So he pulls some strings and goes to the army to be trained by Casper Van Dien. I don’t care what anybody says, I like seeing Casper Van Dien in any movie. It’s one of my rules.

According to IMDb this is a TV movie, but that must mean it went straight to cable on accident. It feels like a legit theatrical release. Admittedly I’m talking about a scene between Stephen Baldwin and Casper Van Dien, but the production value is all there. They walk and talk and in the background we see troops running in formation, Jeeps driving by, skydivers practicing routines on roller boards, parachutes coming in and landing. It’s very complex. It took effort and planning. 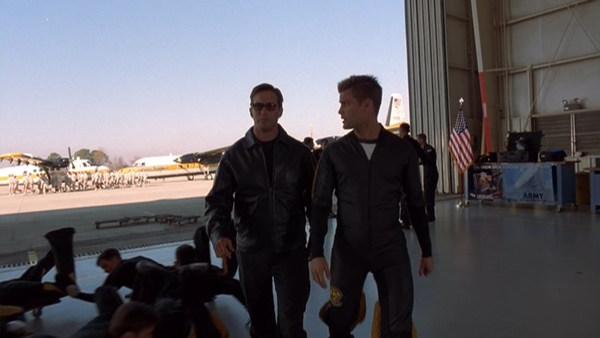 I actually thought this was gonna be more of a Dennis Rodman movie. That’s how they reeled me in. This is after his co-starring role in DOUBLE TEAM and headlining in SIMON SEZ, but he’s kind of a classic henchman role here. As Turbo, the target of the investigation and rival for the #7 spot on the team (which is the #2 spot in earth language) he’s suspicious and jealous of Vic from the first time he meets him. There’s a cool scene where he threatens Vic and has a very brief scuffle with him, and it makes great use of his physicality. He’s so much taller than Baldwin, and he knows how to move his lanky body around. It made me think that casting him in this was kind of like Kareem in GAME OF DEATH. Unfortunately this is not a martial arts movie, he never gets a full-on fight scene and he, uh, exits the movie pretty early.

Vic spends all his time in Parachuteland, except occasionally he wanders out to secretly meet in public with the Lieutenant. Mostly they talk while shooting hoops, but also they meet once at a dog race track and one time Silver calls him from the field of an empty baseball stadium. Isn’t that how it is in movies, these secret meetings gotta be in different visually interesting place every time? Like on a ferry one time, on top of the Statue of Liberty next time.

After Rodman’s gone the team doesn’t have quite the same sense of danger as the ex-presidents gang in POINT BREAK. The only questionable guy is the leader/guru played by Tom Berenger, but he’s Tom Berenger, so you forgive him. 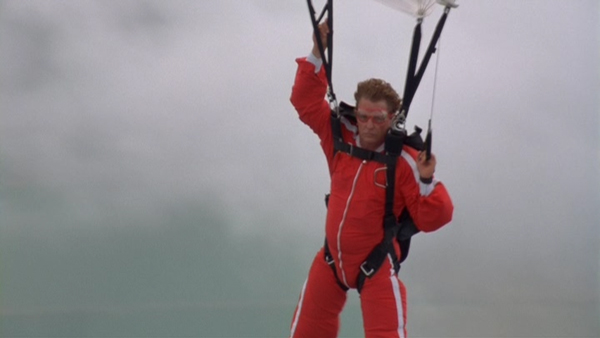 The younger people on the team are portrayed as harmless eccentrics and goofs. There’s the young science whiz nerd Cal (Adam Wylie from Picket Fences) who is treated as a peer by adult ex-lawyer Boom Boom (Roy Ageloff). And there’s two rowdy kids named Rip and Cord (Thomas Ian Nicholas [AMERICAN PIE] and Phillip Glasser [the voice of Fievel in the AMERICAN TAIL movies]) who seem like they could be secondary characters in a STEP UP if they knew how to dance instead of skydive.

You get that classic undercover story element of us wanting him to choose the team over the cops. And not just because of honor and loyalty and rats are bad and shit like in DONNIE BRASCO. Yeah, they’re nice and they’re good to him, but also they’re not really that bad of people. As movie villainy goes helping smuggle drugs a couple times to fund the skydiving team is not the worst crime in the world.

You don’t feel like one side necessarily has to kill the other side, so in order to raise the stakes in the last stretch it shifts into a sports competition movie, with commentators talking over footage of skydiving, explaining what’s going on. And it’s important to note that the footage is good. There is tons and tons of real skydiving filmed for this movie, including scenes where you can tell that Baldwin and Berenger are really diving. Baldwin also got really good on that practice thing where there’s a powerful fan blowing and you learn to float above it, so you see him on there for a really long shot.

There’s actually a connection between some of these skydive movies. Guy Manos, who directed this one, is a world skydiving champion involved in the performing and filming of skydive stunts in many Hollywood movies, and he got a story credit on DROP ZONE.

Honestly, this is as fun as any of them that don’t have Patrick Swayze.

Adam Wylie Casper Van Dien Dennis Rodman Guy Manos Maxine Bahns Phillip Glasser Ron Silver skydiving Stephen Baldwin Thomas Ian Nicholas Tom Berenger
This entry was posted on Wednesday, January 7th, 2015 at 10:17 am and is filed under Action, Reviews. You can follow any responses to this entry through the RSS 2.0 feed. You can skip to the end and leave a response. Pinging is currently not allowed.