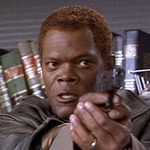 So THE NEGOTIATOR had a pretty catchy thriller hook (hostage negotiator gets framed by crooked cops, takes hostages in a desperate ploy to find out the truth and prove his innocence), but it was definitely that heavyweight actor showdown that lured us in. Two enormously respected actors, also known for hip movies, actoring the shit off each other in a studio thriller. That had appeal back then. 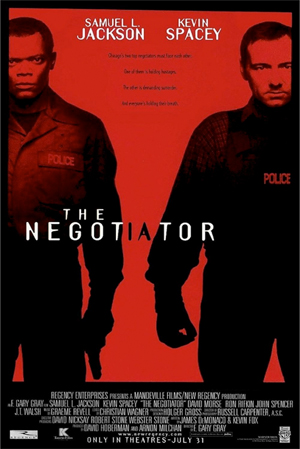 Jackson plays Lieutenant Danny Roman of the Chicago Police Department, who of course we meet on the job, using his wits and persuasion and then having the LETHAL WEAPON type courage/craziness to go in unarmed and try to rescue a little girl from a crazed gunman. We see that he knows every trick in the book, wants “the H.T.” to live but is willing to kill him, is good at deception and getting people on his side, can be unorthodox (also known as “plays by his own rules”), has balls.

And I don’t think they ever spell out that “H.T.” stands for “hostage taker.” At least that’s what I assume it stands for. And if I’m right then good job assuming I would figure it out. Respect.

After a long day at work we see him out with the boys at the cop bar, celebrating somebody’s retirement or something, being humble as people congratulate or tease him about being on TV again. He seems close with his co-workers and it honestly seems very charitable for he and his wife Karen (Regina Taylor, CLOCKERS) to hang out with all these white people whose idea of really letting loose is dancing to “Cotton Eye Joe” by Rednex. But they seem okay with it.

Danny’s partner Nate (Paul Guilfoyle, HOWARD THE DUCK) tells him that he’s onto some secret shit about members of their department embezzling money from the disability fund. And then Nate gets shot in his car and Danny gets set up for the murder. In desperation he pulls a gun in headquarters and takes a bunch of people hostage while he tries to figure out who the embezzlers/murderers are and prove his innocence. He demands to talk to Chris Sabian (Spacey), a hostage negotiator he’s heard of but doesn’t know, because Nate told him it was people he knew that were doing the embezzling. He can only trust strangers.

So the tension is all about not knowing who’s conspiring against him, but knowing they’re cops, and that they are looking for an excuse to shoot him. Some of these guys, especially Commander Adam Beck (David Morse, obviously), are always trying to set up back up plans to sneak in or get a camera in there or get a shot and then oh, sorry Sabian, we accidentally disobeyed your direct orders and tried to kill him and fucked up everything you were trying to do. Whoopsy daisy. Can Danny solve the mystery in time?

There’s a pretty cool moment where the snipers are supposed to shoot him but one of them decides he can’t shoot his friend and respected colleague, and it’s Michael Cudlitz, who apparently was in DRAGON: THE BRUCE LEE STORY, but I know him as Abraham from The Walking Dead. He already had the Hulk Hogan mustache back then. I assumed that was from the comic book. Anyway, Graeme Revell (MIGHTY MORPHIN POWER RANGERS: THE MOVIE)‘s score swells with brotherhood and patriotism and honor and shit as he shouts

Danny’s hostages are sniveling internal affairs investigator Niebaum (J.T. Walsh, TEQUILA SUNRISE), his executive assistant Maggie (Siobhan Fallon, DANCER IN THE DARK), who does not put up with an argument that she should be let go because she’s a woman, weasely con man informant Rudy Timmons (Paul Giamatti in I guess the most consequential of his summer of ’98 roles, which also included THE TRUMAN SHOW, DR. DOLITTLE and SAVING PRIVATE RYAN) and old department friend trying to talk some sense into him Frost (Ron Rifkin, WOLF). Walsh is (SPOILER) clever casting because you assume the moment you see him that he’s the mastermind of this whole thing and while yes, he is hiding something, it turns out he only got paid off.

Some of the others either get Stockholm Syndrome or sympathize with Danny because he actually is the good guy and they end up sort of being his research team to prove his innocence.

If you’re thinking “this sounds okay, but I need there to be a couple more notable character actors in it,” I can offer you John Spencer (THE PROTECTOR, THE ROCK, COP LAND), Dean Norris (LETHAL WEAPON 2, HARD TO KILL, T2, LAWNMOWER MAN) and Nestor Serrano (LETHAL WEAPON 2, BAD BOYS, BAIT, ACT OF VALOR).

This is the third film by director F. Gary Gray, and a big step up for him budget-wise. We always knew he could be cinematic because of the “Natural Born Killaz” video…

…but this one cost more than five times as much as his sophomore movie SET IT OFF. Of course, that’s mostly just the production value of having tons of scenes with fifteen people standing around on headsets listening to the call, and some other guys on the roof, and a crowd of citizens watching the whole thing, and reporters, and some helicopters shining lights on the window. It’s big and fancy and shit but the action is relatively small – some gunspray in the office building, a little bit of rappelling, later they go to a house. SPOILER.

Though I think FRIDAY, SET IT OFF and STRAIGHT OUTTA COMPTON are still Gray’s best movies, he’s the rare black American director who has mostly done movies that nobody thinks of as “black movies” – THE ITALIAN JOB, A MAN APART, BE COOL, LAW ABIDING CITIZEN, THE FATE OF THE FURIOUS, and this. (To be fair it did win best film and director at the American Black Film Festival, and Jackson was nominated for an NAACP Image Award.) It has to have been a conscious decision to tell this story about corrupt white cops conspiring to set up the one black guy they know and him having to go nuts to get anybody to listen to him without so much as a mild hint that race might have anything to do with anything. It would take on a whole different Mario-and-Melvin-in-GANG-IN-BLUE type meaning if it was, say, Danny Glover or Morgan Freeman playing Chris Sabian, the negotiator that Danny demands to come talk to him. Then we would assume he had a totally different reason for trusting him.

In retrospect we can see why Spacey was so good at playing heartless, judgmental psychos and brow beaters in SWIMMING WITH SHARKS, THE REF, SE7EN, etc. But here he plays a loving family man who gets trampled on by his daughter (Kelsey Mulrooney, A LITTLE PRINCESS) and wife (Mary Page Keller, TIMECOP: THE BERLIN DECISION) and when he busts out any alpha male talk on the job it’s often a refreshing “oh, thank god somebody’s standing up to these assholes” heroism. But maybe the most “only Kevin Spacey would do it that way moment” is when he pulls a power move on Roman by purposely letting the phone ring for a while, then hanging up on him and waiting for him to call back. The way he carefully picks up the phone, hangs it up and smugly crosses his arms, you’d think it was some type of bomb dismantling or surgery, a delicate operation that none of these other guys have the expertise for.

The trailer was kind of weird because it ends on a big dramatic line that is not in the movie, but that spoils what happens in the very last part of the movie, creating unfair expectations for more of the movie to be about that.

Co-writer James DeMonaco had previously written Francis Ford Coppola’s JACK, and would follow this up with the ASSAULT ON PRECINCT sort-of-remake and SKINWALKERS, before turning director with an Ethan Hawke movie called LITTLE NEW YORK and eventually found his calling as the guy who does all the PURGE movies. Also credited is Kevin Fox, a first-timer who has since written a bunch of Law & Order: SVU episodes.

The movie is dedicated to Walsh, who had died of a heart attack in February. He also had PLEASANTVILLE and HIDDEN AGENDA in the can. He was such a staple of ’90s movies, so good at burning, silent hatred, with RED ROCK WEST being my favorite. Eerily, this is the third Summer of ’98 movie I’ve reviewed that has a posthumous performance in it. SMALL SOLDIERS was dedicated to Phil Hartman, and DIRTY WORK featured some of the last work of Chris Farley (who also starred in a movie I skipped in the series, ALMOST HEROES).

THE NEGOTIATOR is no better or worse than I expect out of this type of studio thriller: fine, generic, elevated by those two lead performers. I think I was a little disappointed in it at the time, so maybe I liked it slightly better now, but it’s pretty much just an okay thing to watch on cable if it comes on.

David Morse F. Gary Gray Graeme Revell J.T. Walsh Kevin Spacey Michael Cudlitz Paul Giamatti Paul Guilfoyle Regina Taylor Ron Rifkin Samuel L. Jackson Siobhan Fallon Summer of '98
This entry was posted on Thursday, August 30th, 2018 at 11:40 am and is filed under Reviews, Thriller. You can follow any responses to this entry through the RSS 2.0 feed. You can skip to the end and leave a response. Pinging is currently not allowed.

17 Responses to “The Negotiator”