LAW ABIDING CITIZEN is the story of a guy named Clyde (Gerard Butler, 300) whose family is killed in a home invasion in the opening scene. To add insult to injury his attorney Nick Rice (Jamie Foxx, STEALTH) makes a deal for one killer to testify against the other and just get one of them executed rather than risk going to trial just based on Clyde’s eye witness testimony. At the time of the attack Clyde was working on a circuit board, so we know he’s some kind of technological wizard or sorcerer, which explains why ten years later he can exact an ingenious master plan of super revenge with strong overtones of cultural critique. You see, he doesn’t just blame the killers, he blames Rice for putting his conviction rate above actual justice, and the judges for whatever they did, this whole system is out of order, you can’t handle the truth, etc. 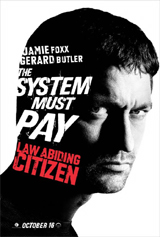 But it’s not a revenge movie. The avenger is the villain. The hero is the attorney, who must stop murders in the face of this bitter madman/biting satirist trying to make a point about “this whole broken system.” He uses bombs and armed drones and shit to attack Justice Department lawyers. You should realize you’re not supposed to be rooting for Clyde about half an hour in when he’s cutting a guy’s dick off with a box cutter. Failing that, you should figure it out when he gives a DVD of the dick-cutting to Rice’s young daughter. Sure, you enjoy torture and mutilation, but what about the children?

(I do remember reading, though, that Butler was shocked to witness audiences cheering for his character. So maybe it’s too subtle.)

It’s got this horrendous torture, done by a mastermind who’s always fifty six steps ahead of everyone else, able to set traps even while locked up, and who’s self righteously trying to make a statement and teach people a lesson. SEVEN begat SAW begat this. I couldn’t help but start wondering why this type of villain is so common now. I just watched one called THE COLLECTOR where the guy built fanciful traps that seemed to anticipate any possible outcome, and there was that Renny Harlin movie 12 ROUNDS where a criminal whose girlfriend got run over enacts an elaborate revenge on the cop he unfairly blames for it. Both that one and this one have a dangerous murderer who the authorities all refer to just by first name.  In fact, LAW ABIDING CITIZEN is like the prestige version of 12 ROUNDS. Instead of a former WWE Heavyweight Champion they have a previous best actor Oscar winner, instead of fun action sequences they have aspirations of making a grand statement about justice. It still comes off lowbrow, even kind of sleazy, but it seems like it thinks it’s kind of profound. Makes sense that it’s written by Kurt EQUILIBRIUM Wimmer. (I still like his Brian Bosworth movie, though.)

Why all these preachy meticulous-preparation bad guys? How long before we have a horror thriller called THE SCOUT where the villain just plans ahead real good because of what he learned camping as a kid? Does this mean we as a society fear the intelligent? Or just that SAW was popular so a bunch of people wrote scripts like that? These questions were really distracting me, but luckily the movie drew me back in using a classic action movie move: it couched Clyde’s Jigsaw-style plan in the language of the DIE HARD ripoff. It’s the old “this guy’s from the Department of Defense, their top guy, you don’t want to piss him off, etc.” The William Stranix or Travis Dane approach.

There are some good parts. There’s at least one death that genuinely took me off guard. And I like that some of the master strokes aren’t just violence. For example he successfully talks a judge into releasing him on bail only so he can yell at her that she was gonna let a murderer out on the streets just for doing some fancy legal maneuvers, and that’s what started this whole conflict in the first place. And when you find out the trick of how he’s doing what he’s doing it’s an enjoyably ludicrous explanation.

Butler is pretty good (I like to imagine that his shifting accent is due to time spent working overseas). To be honest though, Foxx isn’t that good, he kind of goes through the motions and doesn’t really find a way to make his character very relatable. He’s usually better than this.

It might work better if Clyde was more seductive – like if he starts out getting an audience-pleasing revenge but goes further and further over the line. But then I guess it would be closer to DEATH SENTENCE (a much better post-SAW revenge movie in my opinion – and on further viewing a better movie than I realized when I wrote my review). I do appreciate that he’s not a 100% evil villain. He leans slightly toward anti-hero. At the end, when he’s lost (SPOILER), but one of his points seems to have finally gotten through to Rice, he seems genuinely comforted by that.

I can’t really get excited about this one, I’d rather see a real good movie or a much worse one. But it’s okay – not as dumb as you might expect, but not as smart is it probly thinks it is. If it can think. But I don’t know if it can, because it’s not all that smart.

DEPARTMENT OF DID I MISS SOMETHING? Maybe my mind drifted or something, but there was a bit I didn’t understand, so maybe somebody who’s seen it can plug in a few holes for me. Jamie Foxx’s assistant, the blond lady, was getting information from a secret source. She called the source “Chester,” but wouldn’t tell who it was. Foxx’s character brings it up more than once – “Chester – he’s your boyfriend, right?”, reminding the audience that there’s a mystery afoot. She tells him it’s not time for him to know yet. It seems like this is setting you up either for a surprise twist or a “surprise” twist where she’s been working with Clyde all along.

But did they ever reveal who Chester was? I didn’t catch it if they did.

A smaller matter is Clyde’s accomplice. They keep saying they suspect he has an accomplice on the outside. Then, during the climactic confrontation, Clyde asks “Did you catch my accomplice?” and Rice says, “Yeah.” Was this just awkwardly delivered sarcasm, because now he knows there wasn’t an accomplice, or did I miss the reveal of an accomplice? (And Chester?)

F. Gary Gray Gerard Butler Jamie Foxx Kurt Wimmer
This entry was posted on Wednesday, February 17th, 2010 at 2:38 am and is filed under Reviews, Thriller. You can follow any responses to this entry through the RSS 2.0 feed. You can leave a response, or trackback from your own site.