John Dolittle is a medical doctor with a gorgeous wife named Lisa (Kristen Wilson, who played Robin Givens in TYSON) and cute daughters Maya (Kyla Pratt, LOVE & BASKETBALL) and Charisse (Raven-Symone of later-Cosby-Show fame) and he’s kind of a self-absorbed dick who’s in such denial about having been able to talk to animals when he was a kid that he refuses to even learn what type of animal his daughter’s guinea pig is. It says right there in the title that he’s a doctor, but they still give him the standard issue Workaholic Dad Neglects His Family storyline. His office is working on a Big Merger that would make him rich, and his partner Dr. Weller (Oliver Platt, EXECUTIVE DECISION, also in BULWORTH that summer) is always hassling him because they have to impress Mr. Calloway (Peter Boyle, THE FRIENDS OF EDDIE COYLE, had been in SPECIES II in April) into signing The Big Contract after The Big Presentation.

But in the middle of this John almost runs over the Norm MacDonald dog and hears it call him a bonehead. Suddenly he hears animals speaking everywhere, and talks to them, and thinks he’s going crazy. Many have celebrity voices, including Chris Rock as the guinea pig Rodney, Albert Brooks as a depressed tiger, Jenna Elfman as an owl, Julie Kavner and Garry Shandling as an unhappy pigeon couple, John Leguizamo as a rat, Paul Reubens as a raccoon, Jonathan Lipnicki as a tiger cub, and Ellen Degeneres, Brian Doyle-Murray and Gilbert Gottfried as dogs. I didn’t recognize him, but Tom Towles (HENRY: PORTRAIT OF A SERIAL KILLER, NIGHT OF THE LIVING DEAD, HOUSE OF 1,000 CORPSES) apparently plays a german shepherd. 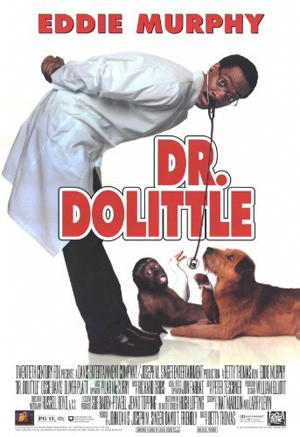 While the family is vacationing in a cabin, John helps an owl with a wing injury, so word spreads throughout the forest and animals start following him around asking for help with various maladies. The middle section of the movie is a bunch of protracted, contrived scenes of him running around flustered trying to hide from everybody that he has ducks in the bath tub or that he’s doing CPR on a rat or whatever. The other humans have pretty thankless roles, especially Wilson, who spends so many scenes just acting confused and worried as he repeatedly rejects sex to go bark at a dog or drive away with no explanation.

(We hear him speaking English with the animals, but it’s indicated that people hear him making animal sounds, which must be very strange.)

There’s another straight man in Dr. Reiss (Richard Schiff, THE LOST WORLD: JURASSIC PARK, also in DEEP IMPACT that summer) though Dr. Fish (Tambor, THREE O’CLOCK HIGH, who would be in THERE’S SOMETHING ABOUT MARY later that summer) gets to do some comedy, being a veterinarian insulted by this M.D.’s assumption that he knows how to diagnose animals.

Ossie Davis (BUBBA HO-TEP) may have the worst part as John’s dad who lives with the family. He stands around looking concerned until, at the very end, he admits that his son can talk to animals and that he shouldn’t have made him suppress it. It’s kinda nice but more laughable that they turn this into a plea for tolerance of people’s quirks. The doctor ends up in a mental hospital (with Don Calfa from RETURN OF THE LIVING DEAD) and decides to ignore his abilities so that they’ll let him out, but then he feels guilty when he sees his nerd daughter Maya follow his example and abandon her science experiments. So, fuck it, he decides to (somehow) kidnap the suicidal tiger from the circus and do surgery on it.

Hey, he’s just a non-comformist, all right? Let him be himself.

Another thing it has in common with DIRTY WORK: a joke about ROCKY III. When the tiger is feeling sorry for himself and says that people don’t like tigers, the doctor rebuts him by bringing up “Eye of the Tiger.” Strangely my mind had gone to the tiger jacket in ROCKY II. I guess tigers and the ROCKY series really are intertwined in the popular imagination.

One thing it does not have in common: very many jokes that made me laugh. I guess Rock (also in LETHAL WEAPON 4 that summer) is okay. Murphy does well with his character. But for my tastes it’s definitely not funny enough to make up for the half-assedness of the parts we’re supposed to take seriously. Unsurprisingly the writers are sitcom vets: Nat Mauldin wrote on Barney Miller, Night Court and Capitol Critters before he got into movies with THE PREACHER’S WIFE (and later A CHRISTMAS STORY 2). Larry Levin wrote for It’s Garry Shandling’s Show and Seinfeld and later did I LOVE YOU, MAN. Some of those are good shows, of course – I’m just trying to say they approach this from a joke writer’s “okay, doctor who talks to animals – what generic story template can we use for that?” type of angle.

The concept, of course, comes from a series of children’s stories by Hugh Lofting, originally conceived in the trenches of World War I as an escape from the horrors or the tedium. In the stories the doctor lived in Victorian England, had specific animal friends (Gub-Gub, Dab-Dab, the Pushmi-pullyu) not used here, and travelled around having “Astonishing Adventures in Foreign Parts.” The character had already been adapted into an animated short by Lotte Reiniger and a radio drama by the time of the famous 1967 movie musical starring Rex Harrison, now somewhat infamous as an allegedly undeserving best picture nominee. A new movie version directed by Stephen Gaghan (SYRIANA) and starring Robert Downey Jr. (UP THE ACADEMY) is coming next year.

Of all these, the ’98 version clearly has the least to do with the original character. They just wanted the name and a doctor who talks to animals. It’s clearly a movie that was made because of BABE‘s innovation of adding digital mouths to live action animals to make them lip sync. Like BABE it switches between that technique and realistic puppets made by the Jim Henson Creature Workshop. Kinda sad that this cheesy red-letters-on-white-background PG-13 family comedy made nearly $300 million in the same year that the beautiful BABE: PIG IN THE CITY flopped and got people fired.

I’ve noted before that Eddie “My Girl Wants to Party All the Time” Murphy always puts a bunch of R&B songs on his movies. It seems kind of funny to hear these serious songs on the end credits after the nutty professor goes around farting up the city or whatever. Dr. Dolittle: The Album has songs by Ray J, Montell Jordan, Aaliyah, Ginuwine, Jody Watley, Dawn Robinson and Tisha Campbell-Martin, etc. The one that made me laugh is the end credits one by Changing Faces and Ivan Matias, because it’s called “Do Little Things” and they just figured out a way to play with the name “Dolittle” without having to, like, sing about a veterinarian sticking his hand in a dog’s ass. According to Wikipedia, the album was “a huge success” and went double platinum. I guess the biggest song was “Are You That Somebody?” by Aaliyah, which was nominated for a Grammy.

For actress-turned-TV-director-turned-theatrical-feature-director Betty Thomas this was the third in a string of successes that started with THE BRADY BUNCH MOVIE (1995) and PRIVATE PARTS (1997). It was her biggest hit until ALVIN AND THE CHIPMUNKS: THE SQUEAKQUEL made her the pre-WONDER WOMAN highest grossing female director of all time.

“Squeak not the favor of the multitude; it is seldom got by honest and lawful means. But squeak the testimony of few; and number not voices, but weigh them.” –Kant

Betty Thomas Chris Rock Eddie Murphy Jeffrey Tambor Kristen Wilson Kyla Pratt Norm Macdonald Oliver Platt Ossie Davis Peter Boyle Raven-Symone Richard Schiff Summer of '98 talking animals
This entry was posted on Monday, July 16th, 2018 at 11:44 am and is filed under Comedy/Laffs, Reviews. You can follow any responses to this entry through the RSS 2.0 feed. You can skip to the end and leave a response. Pinging is currently not allowed.