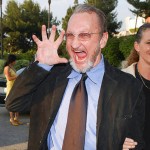 The gimmick this time is that because she has a baby inside her, and because babies (according to the movie) dream all the time, she suddenly starts having Freddy dreams while awake. In the dream world the baby is a kid named Jacob and he does not have a positive male role model in his dream life so unfortunately Freddy comes in and takes advantage of that. You know how a bad uncle lets his little nieces and nephews drink beer, or helps them score pot? Freddy’s like that, he feeds Jacob the souls of Alice’s dead friends. I’m actually not sure what he’s trying to do – will this make the baby grow up into Freddy? Is he just trying to make the baby a killer like him? Or is he just pushing Alice’s buttons by messing with her kid? I don’t really know.

What if the baby doesn’t turn out to be evil, but has dream powers from eating all those souls? Maybe he’ll haunt people’s dreams but instead of giving them gimmicky deaths ironically based on their hobbies he’ll give them nice dreams. Instead of getting slashed and they wake up and have real cuts, he gives them a lollipop and they wake up and it’s right there on the pillow next to them. Or he gives them a bunch of money. And it works as real currency, it doesn’t show Freddy wearing a George Washington wig or anything stupid like that. It’s not printed in red and green ink.

On the other hand, he’s a fuckin fetus. How does he know what a lollipop or money is? What do babies dream about, anyway? I mean it can’t be the old “going to class without pants on” dream, because fetuses don’t wear pants. Do they dream about umbilical cords? I don’t know, whatever they dream about I’m betting it’s some weird shit. I bet baby Jacob gives you more fucked up dreams than Freddy. Freddy’s dream powers are actually limited by his knowledge of reality. Fetus dreams are unencumbered by such boundaries.

I guess you could say this movie is pro-life, because the baby being a grown kid in her dream kind of indicates that life begins at conception. Also, the whole point of a horror movie is to try to survive, which is pro-life.

But I also think it’s a feminist movie. It’s pro-lady. Alice has taken charge of her life. She’s not so timid anymore, she doesn’t get pushed around like she used to. She got her father to stop drinking and repair their relationship. When her friend points out that she could abort the baby and Freddy wouldn’t get to her anymore she says no – acknowledging that it’s a choice, and making it for herself. When Dan’s folks try to get her to let them raise the baby she stands strong and says it’s her responsibility. When Dan gets killed in a really cool scene where he becomes one with a motorcycle Alice stays strong, she doesn’t lose her shit. So she’s the type of strong female character Nancy was in the first one and not the screaming airheads people (mostly unfairly) associate with slasher movies.

Wait a minute, come to think of it, why not get an abortion? Then the kid will just keep coming back in people’s dreams. He’ll be a more powerful baby that way than if he was alive. I know abortion isn’t pleasant, I consider myself pro-choice but in general I hope people don’t get abortions. But you gotta at least make exceptions for cases of rape, incest or babies fed “soul food” by Freddy.

But I guess even if he was gonna turn out to be an evil Freddy baby it might be unfair to abort him. I mean think about it, if you aborted every evil slasher baby then Seed of Chucky never would’ve been born, and he was actually a nice guy. Also Godzilla was a real asshole in his prime but his kid turned out okay.

Anyway, back to the feminism. There are other women who make it out okay – the ghost of Amanda Krueger, Freddy’s mom, is key to stopping Freddy this time. And I think Alice’s friend played by Kelly Jo Minter may be the first supporting character in any of these movies to have a gimmicky Freddy dream (she’s a diver, so it’s about the diving board attacking her and jumping into a pool that turns out to be empty) and survive. That’s pretty tough. Also, there are many, many scenes where the camera flies through spooky, fleshy tunnels which I guess are supposed to be some kind of evil Freddy flesh but are clearly, you know, girl parts. Private girl parts.

Freddy’s not very scary anymore, but he’s arguably not as corny as in part 4. He doesn’t wear sunglasses, at least. He does re-use that terrible “soul food” line, which is embarrassing. But he mostly stays away from puns and wacky costumes. He’s reborn in a dream that also acts as a flashback to his birth. But it can’t be what really happened because he’s a monster baby that looks like burnt up Freddy. Then he grows into adult Freddy. One of the more authentically dreamlike moments is when a Freddy stuntman jumps through the air and you can see in his silhouette that he has big claw-like toes. That’s pretty weird. Also I like when for no reason one of his arms is really long. A nice tribute to the long-arms scene in the first one, but this time it’s an animatronic arm with moving fingers instead of a rubber hand on the end of a pole.

But then you get to the scene that really emblemizes everything that gets so lame about these sequels. There’s a character who likes to draw and read comic books. In a dream he finds himself reading a comic book of the movie so far, and gets to a panel of him reading the comic. Then he gets sucked into the comic and the world around him is black and white, but he’s in color. Okay, so they play with this color/black and white thing which is an okay art director showoffy type gimmick, but then Freddy, he– I have a hard time saying this. But he, uh– well, he turns into “Super Freddy.” I’d rather not go into the details.

When you think about it the death of this comic book guy is really tragic. This kid is just graduating high school and yet his artwork (which covers his entire room) looks 100% profesional. Clearly he is a great talent lost too soon. But it’s not to be relieved by his death because the character is so annoying. He looks like a 35 year old dressing as a teen skateboarder for a Church of Latter Day Saints commercial. And he talks like Garth from WAYNE’S WORLD. In the movie’s most unintentionally hilarious line he whines about the death of the girl he had a crush on:

“The Phantom Prowler wouldn’t have been afraid to tell her how he felt. If I only had a tenth of his guts!”

Later he inspires Freddy to ride a skateboard. So yes, he deserves to die. And I hope they burn in hay-ell.

Like anything that gets to part 5 this is not all that hot. But I’m not sure it deserves the bum rap it gets. It has some spooky atmosphere in parts and it reaches a little bit, it’s taking baby steps towards trying something new. Get it, because of babies. It is a movie about babies so I said baby steps. I didn’t even write that pun on purpose, it just flowed out of me. I’ve been watching too many Freddy movies I guess.

slashers
This entry was posted on Tuesday, September 2nd, 2008 at 4:50 pm and is filed under Horror, Reviews. You can follow any responses to this entry through the RSS 2.0 feed. You can skip to the end and leave a response. Pinging is currently not allowed.

4 Responses to “A Nightmare on Elm Street 5: The Dream Child”