It pains me to deliver this news, but Bruce’s new one is not too hot. It’s not terrible, it’s mediocre, which of course is usually worse.

The premise of the movie is that Bruce is a washed up, alcoholic cop who’s been up all night and before he can go home he has to deliver a witness sixteen blocks from the jail to the courthouse. He really looks like he could use a nap, but that never comes up in the movie. It would be cool if there was a suspenseful scene about whether or not he could take a nap without getting shot.

But despite the tiredness, this doesn’t sound like a hard mission. Right away you’re figuring geez, sixteen blocks is all? This is gonna be a short movie. You figure maybe 2 minutes to walk a block (that’s probaly being conservative), plus a couple minutes to get him signed in, it’s not gonna be longer than 40 minutes. You start thinking maybe there should’ve been a discount on the movie tickets. BUT THERE’S A CATCH. He drives him the 16 blocks instead of walking, and the traffic is bad. So it’s alot slower than walking. Also, he stops at the liquor store, so that causes a little delay. And also the witness is gonna bust open a huge police corruption scandal so all the cops are trying to kill him and Bruce’s character Detective Jack Moseley decides to do something right for a change and get this guy to his destination. Remember, he was a cab driver in THE FIFTH ELEMENT and maybe he has a little of that work ethic still in his sense memory. Anyway, because of shootouts and hiding and what not it takes longer than expected and it seems like they end up travelling alot more than 16 blocks overall. (they should probaly tell you in the corner how many blocks they are from the courthouse, kind of like EIGHT BELOW keeps telling you how many days the hero dogs have been alone in the snow.) 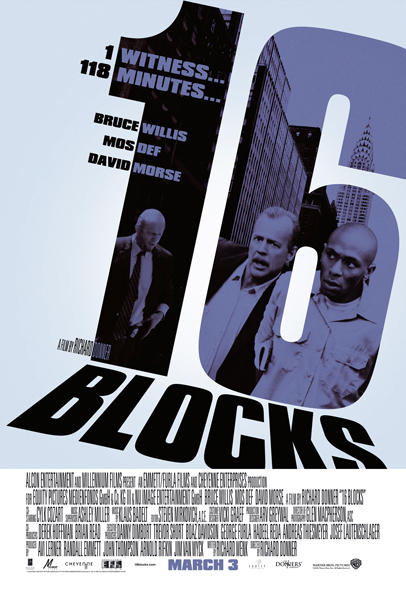 The witness is played by Mos Def. We know from DAVE CHAPPELLE’S BLOCK PARTY and whatever the space movie was he was in, this guy can be funny. You can’t tell that from this movie, though. He talks in a nasally cartoon voice for the whole movie that seems like it’s maybe supposed to be funny, but he only gets one or two funny lines. He mumbles to himself alot and is obsessed with birthday cakes, and I think he’s either supposed to be shizophrenic or mildly retarded. But it’s not really funny or sweet and it feels like it’s trying too hard to be both.

Mos Def’s character is named Eddie Bunker, but everybody refers to him as “the kid” for the entire movie. I looked it up, and Mos Def is 31 years old. Maybe they shoulda gave him a backwards baseball cap and a scooter to emphasize that he’s playing younger than he actually is.

The leader of the corrupt cops is veteran prick actor David Morse, who chews gum for the entire movie. You never see him putting gum in his mouth so I’m thinking maybe this is why he’s such a prick, his gum has no flavor.

Near the end Bruce and Mos get trapped in a bus with hostages, and they cover the windows with newspapers and then try to ram the bus through a wall of cops. This is the point when you realize holy shit, this really is just like THE GAUNTLET, where Clint Eastwood played a washed up cop who had to deliver a witness that other cops were trying to kill, and he hid inside a bus that he had to drive through all the cops with all the firepower in the world. Only difference is Clint had enough smarts to rig the thing with hillbilly armor and that gave him the extra edge over Bruce. But Bruce managed to get out and continue the chase on foot which is also admirable. I guess when all you have is newspapers your bus just isn’t going to withstand as much damage, and you have to find a different last stand.

I like Bruce’s performance in the movie but there’s just nothing original or exciting enough about the story and its execution to make this one stand out. Bruce is real stoic which would be a good thing but it forces you to spend more time listening to Mos Def’s annoying character. None of the action is all that thrilling either. Everything is only okay.

Now, this gives away the ending of the movie sort of but I have to complain. What the fuck are they thinking having Bruce secretly record the bad guy confessing what he did? This shouldn’t have to be officially declared, but I’ll go ahead and do it. ATTENTION ALL HOLLYWOOD SCREENWRITERS. YOU ARE NOT ALLOWED TO USE THIS KIND OF COPOUT ANYMORE. It’s been done. It’s over. Used up. If you use it now, you look like an idiot. The audience feels ripped off. The babies cry. The flowers die. You’re ruining everything. I know it takes some smarts to figure a different way out of a difficult situation, but that’s why we’re paying you. We want to see Bruce find a cool way to solve his problems. If Bruce can’t figure it out, you have to. And recording the bad guy saying what he did IS NOT a cool way. Stop it.

For now on, all Hollywood studios that use the “bad guy makes incriminating speech that is secretly recorded” device must pay me $100 emotional stress restitution for each instance. You may signal your compliance with this agreement by releasing new movies.

That’s about all I have to say about 16 BLOCKS so let me add an unrelated complaint. Because we don’t follow the rules around here, I’m gonna tag a different topic onto this review. Before the movie there was a trailer for LUCKY NUMBER SLEVIN, another Bruce movie that comes out next month and looks more promising. So I’m all excited for some Bruce Willis fun and then the next trailer is for UNITED 93, the movie about the plane that crashed in Pennsylvania on 9-11. Talk about a fuckin bummer. I know this Paul Greengrass guy is supposed to be good, he did BLOODY SUNDAY and I’m sure it’s more tasteful than it sounds. But for god’s sake, Greengrass. Maybe you oughta retitle this shit TOO SOON: THE MOVIE. I’m not the most sensitive guy in the world, I even watch serial killer movies now and again, but even I don’t want to see this shit. Seeing that trailer sandwiched between a Bruce Willis trailer and a Tyrese trailer made me sick. I know this guy is British so he’s a little more distanced from it than us, but have a heart, bud. This is a movie where you know that every character represents a real person who really died just five years ago, and their relatives are still alive having to see this movie advertised before 16 BLOCKS and on TV, in magazines, probaly on the side of buses and crap. To me, movies are about the most important thing there is and I defend anybody’s right to make a statement that maybe the rest of society is not ready for. But come on man, even if the movie is fucking great, this might be a case where just doing it makes you an asshole.

A friend of mine manages a video store and told me FLIGHT 93 was on a list of upcoming movies they could do a fun promotional tie-in for, like they did with HILLS HAVE EYES and DATE MOVIE. No matter how respectful and classy the thing is it’s still pretty fuckin tacky just because it’s a movie being released like a product.

And worst of all, Greengrass, you don’t know what happened on the plane. I don’t think it takes a conspiracy theorist to figure we don’t know what really happened there. I’m sure they’ll go with the official story but what happens when the real story comes out, whether the plane was shot down or who knows what, and then the family members have to live with the extra burden of having to explain to people that the awesome movie version was bullshit?

Or if it really is 100% accurate, what business is that of ours anyway? At this point in history isn’t it okay for the family members to have to live with that horror without having us enjoy it as thrilling cinematic drama? It’s like EXECUTIVE DECISION, but BASED ON ACTUAL EVENTS! And everyone dies instead of just Seagal.

Greengrass, for your insensitivity and crassness I sentence you to having to watch 16 BLOCKS a bunch of times in a row. Jerk.

Bruce Bruce Willis David Morse David Zayas Mos Def Richard Donner
This entry was posted on Sunday, March 12th, 2006 at 2:16 am and is filed under Bruce, Reviews, Thriller. You can follow any responses to this entry through the RSS 2.0 feed. You can skip to the end and leave a response. Pinging is currently not allowed.