(John Travolta, as badass loanshark turned movie producer Chili Palmer points this out and says, “You know what I have to say about that? Fuck that.” And if only he had repeated “fuck that” again for emphasis I guess he would’ve gotten the R and I could’ve seen this movie in a quiet theater full of adults and not a fuckin high school cafeteria. But that’s a subject for a separate rant.)

Anyway that’s kind of how GET SHORTY was though and most of it works here, it’s fun if not exactly a fresh new idea. There are a couple of fuck ups though where they got celebrities playing fictional characters who make references to trademarks of the actual celebrities, and that shit just doesn’t fly. The Rock for example keeps doing his famous eyebrow movement (oh jesus, I can’t believe there is even such a phrase as “famous eyebrow movement”), and that’s just not funny. That belongs in the scrap pile with the part in SCREAM 3 where some asshole tells Carrie Fisher she looks like Princess Leah. That’s not a joke, that’s a reference. Stop it kids. 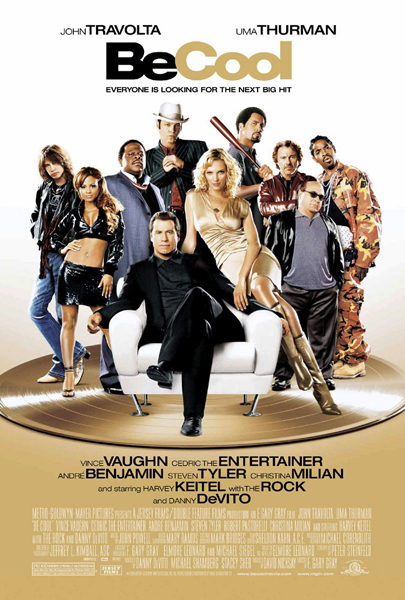 Also, they got a scene where John Travolta and Uma Thurman dance together, and you’re supposed to be excited because remember, they danced together in PULP FICTION. But in PULP FICTION you were supposed to be excited because remember, he danced in SATURDAY NIGHT FEVER. I mean how many fuckin times we gonna get excited because the man dances? At some point it’s gonna occur to America that John Travolta’s a dancer. So by definition he ends up dancing at some point. It’s not really that big a fuckin deal, in my opinion.

Anyway this time Chili gets caught up in the music industry, becoming the manager for a promising young singer, stealing her away from a wannabe gangster manager (Vince Vaughn) and getting caught up with debts to a heavily armed gangsta rap group and the russian mafia. I haven’t read the book on this one but there’s a cast of characters with the scent of Elmore Leonard all over em, including Vince Vaughn’s white pimp/manager Raji, who “thinks he’s black,” and his gay Samoan bodyguard who wants to be an actor (The Rock). Cedric the Entertainer is also in there as a bourgeious businessman turned thug rap producer, the rapper Andre Benjamin is the ridiculous leader of the gangsta rap group the Dub MD’s. Uma Thurman is the love interest, widow of James Woods, and Harvey Keitel is in there too. Pretty good cast now that I think about it, although they don’t all seem like they’re in the same movie.

And I’m gonna lay the blame on F. Gary Gray, director of FRIDAY and SET IT OFF. The movie is exactly like he’s been since FRIDAY: good but not great, impressive but not consistent, serious but not serious enough. Always showing promise but never quite living up to it. But not completely disappointing. Just in the middle there somewhere, that area where we’re all gonna forget about it pretty soon.

Now I liked GET SHORTY but I think it’s a little too cartoony for Elmore Leonard. It doesn’t take a genius or me to tell you that the two best Elmore Leonard movies are JACKIE BROWN and OUT OF SIGHT. Those are movies that can be funny at times but only in the way that real life and real people are funny. They are still serious crime stories with dangerous people and consequences.

(I also love MR. MAJESTYK but that’s more of a Charles Bronson vehicle with a great Elmore Leonard premise than it is pure Leonard. He wrote the script, didn’t really like how they played it in the movie and wrote the book afterwards.)

(Oh and by the way when the fuck are they gonna put out KAREN SISCO on dvd? Come on home video market, I know you fuckers are reading this. Get me a KAREN SISCO dvd.)

For some reason when I heard F. Gary Gray was doing this one I thought he might give it a little more grittiness than the last one, treat it a little more serious. But he’s actually kind of in FRIDAY mode here. Which I guess is okay, FRIDAY is a funny movie and a dumb silly GET SHORTY sequel is what America wants. But if anybody ever decides to ask me, I’ll say he plays it too broad at times and loses the effect. The main mistake is the way Vince Vaughn plays Raji. Either Vaughn or Gray or both thought he was supposed to be in another wacky comedy with the ol’ “white guy talks in black slang” joke that we all adore. What could possibly be funnier than a white dude saying “homey,” ha ha ha, etc. But without having read the book, I’m 200% positive that in Elmore Leonard’s version, this is a character quirk to a dangerously stupid thug. It should be played like a real guy, not like a character in a Will Ferrell movie. I’m gonna do a SPOILER here so be ready. There’s a scene where Raji is talking to a hitman he doesn’t like that’s supposed to kill Chili for him, and the hitman starts choking on a ham sandwich. Suddenly Raji turns on the hitman and beats him to death with an aluminum bat that the guy made fun of earlier. This is pure Elmore, because it makes no sense for him to do this, but he’s a violent idiot and that’s why he’s dangerous. He’s fucking himself by doing it but it’s his chance to impress himself by killing the guy. As Chili later says, “It’s impossible that you’re this dumb.” But really he knows it’s not impossible. It happens every day.

Unfortunately because Vaughn has played this character like this is just a silly comedy and not a real guy, you don’t take the scene seriously at all. It’s a cartoon. Compare that to the scene in JACKIE BROWN where DeNiro’s funny pothead character loses it in the parking lot. You see the whole slow process of him going from room temperature to boiling over, and it’s fuckin dynamite. It makes you squirm. You feel it in your gut. I choose feel it in your gut over a brief chuckle.

The Rock and Cedric the Entertainer are a little over the top too but I think they work a little better. The Dub MD’s are pretty funny, they’re like a whole gang of Deebos (Tiny Lister’s character in FRIDAY), gigantic monsters but strapped and always wearing kevlar vests like they’re at war. They drive around in a convoy of hummers playing, I’m guessing, their own album at full volume. Which is kind of like a band going on stage wearing their own t-shirts, I think. Andre Benjamin is pretty funny in this.

The most important supporting performance is by The Rock, because as previously discussed this guy is the future of cinema, etc. He treats his character with respect if not dignity. He gets dressed up in a silk cowboy outfit and sings Loretta Lynn’s “You Ain’t Woman Enough to Take My Man” with a straight face. His best part is the look of intense pride on his face after performing a dialogue from BRING IT ON for Chili. He’s playing on gay stereotypes but I don’t think it’s homophopic. You’re supposed to like this guy. But as usual, you watch this with a PG-13 audience going “eeeeewwww” at every wave of the wrist and it becomes a pretty different movie, you start to feel bad about it.

Anyway, it’s a good step for him to do this comedic supporting role. Somebody give this guy a truly great role and it will be over. 100% guaranteed The Rock could be a beloved movie actor as long as he escapes from dumb movies like WALKING TALL and THE SCORPION KING. Where the fuck is Steve Soderbergh? I got a job for him. I’m serious.

Okay, so the movie is forgettable. But there’s some good news too. For the two hours of this movie, John Travolta is cool again. Who ever thought that miracle could ever happen again? Definitely not me. Let me share a few words and phrases with you:

Admittedly, I thought he was surprisingly restrained in THE PUNISHER, especially considering he was playing a villain in a comic book movie. But that’s not the same as this. Playing Chili Palmer again he reminds you what we as a country once loved about John Travolta, for a little while. He lets go of the crazy overacting bullshit and becomes just a slab of undilluted swagger squeezed into a nice black suit. He even looks good in those suits! Maybe his face is a little rounder than it used to be, but the spirit is still there, still pure inside. It’s about his confident posture, his menacing smirk, his complete lack of fear. It’s about sitting comfortably in a chair with a gun pointed in his face, showing no trace of concern, knowing he can come out on top of any situation. Walking out from around the corner after his friend and his car have just been gunned down, then stopping to light a cigarette two feet in front of the killer, not even looking at him. Because he’s Chili Palmer.

I’m not sure I’ll ever get the chance to say this again, so I’ll say it now: good job John Travolta. Thank you for this performance, bud.

Andre Benjamin Cedric the Entertainer Elmore Leonard F. Gary Gray Harvey Keitel John Travolta The Rock Uma Thurman Vince Vaughn
This entry was posted on Tuesday, March 8th, 2005 at 2:03 pm and is filed under Comedy/Laffs, Crime, Reviews. You can follow any responses to this entry through the RSS 2.0 feed. You can skip to the end and leave a response. Pinging is currently not allowed.

2 Responses to “Be Cool”