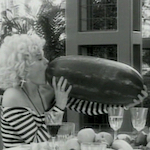 It’s not really a movie per se, but (thankfully) a 51-minute comedy special for Julie Brown (ANY WHICH WAY YOU CAN, BLOODY BIRTHDAY), transplanting her ditsy, entitled but well-meaning Valley Girl persona into a parody of Madonna. I was familiar with Brown in the ‘80s from her comedic songs “‘Cause I’m a Blonde” and especially “The Homecoming Queen’s Got a Gun,” where she juxtaposed All-American high school imagery with violence (which seemed edgy in those days), and then from her MTV show Just Say Julie. I had seen her in EARTH GIRLS ARE EASY, but didn’t realize that she wrote and produced it based on one of her songs. At this time she had a sketch comedy show on Fox called The Edge, which co-starred Jennifer Aniston, Wayne Knight and Tom Kenny. END_OF_DOCUMENT_TOKEN_TO_BE_REPLACED 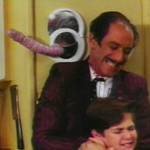 But in the late ’80s he decided to make his own movie to exercise and showcase the skills of The Burman Studios, the company he ran with his sons Barney and Rob. I remember it was on the cover of Fangoria under the title LIFE ON THE EDGE, and that might be the only reason I was aware of it. END_OF_DOCUMENT_TOKEN_TO_BE_REPLACED

The DVD cover brags about an “All star cast!,” which is stretching it, but the huge ensemble cast does include an impressive lineup of character actors, some of them better known now than they were then. You also got Ned Beatty, Brion James (BLADE RUNNER, 48 HOURS), Michael Lerner (MANIAC COP 2), Michael McKean, Jeffrey Tambor, Stephen Tobolowsky, Christopher Lloyd, Larry Miller (FOODFIGHT!), Corbin Bernsen, Bobcat Goldthwait, Dylan Baker, Robert Klein and Harvey Korman (The Star Wars Holiday Special). Candy Clark and Bo Hopkins of the AMERICAN GRAFFITI saga show up together. Since there’s sort of a variety show going on at the center of it there are appearances by Rosemary Clooney, George Burns, Joey Lawrence (as a dreamy crooner) and even Billy Barty (WILLOW). Also Gary Anthony Williams, the voice of Uncle Ruckus on The Boondocks, made his first movie appearance. END_OF_DOCUMENT_TOKEN_TO_BE_REPLACED WILLOW CREEK is the latest Bobcat Goldthwait directorial work, but mostly it’s just the latest found footage movie. This one is about a couple visiting the area in Northern California where the famous (admitted hoax I thought, but I guess not) Sasquatch footage was filmed in 1967, retracing the journey of the filmers and making their own video about it. Boyfriend Jim (Bryce Johnson, also star of Goldthwait’s SLEEPING DOGS LIE) is a believer, but has enough of a sense of humor about it that a stranger angrily tells him “It’s not a joke!” after seeing him film in front of a wooden Bigfoot statue. Girlfriend Kelly (Alexie Gilmore, SURFER, DUDE) has to confess complete Bigfoot atheism, which leads to some tension and arguments. She’s just going along to have fun with her boyfriend, but it upsets him that they’re not on the same page.
END_OF_DOCUMENT_TOKEN_TO_BE_REPLACED

Bobcat Goldthwait’s latest directorial work is sort of a primal scream or a cathartic punching of a wall. Like SLEEPING DOGS LIE and WORLD’S GREATEST DAD it has an outrageous high concept premise, but it goes more where you expect than those ones do. It’s fun, though.
END_OF_DOCUMENT_TOKEN_TO_BE_REPLACED

ah, shit. I can’t explain it. There is no rational justification. But she does it. (Off screen, thank the Lord.)
END_OF_DOCUMENT_TOKEN_TO_BE_REPLACED

Well, that’s not the WINDY CITY HEAT you’ll sit down to watch, though. That’s the movie-within-the-movie. The movie that we can get on DVD is an elaborate practical joke played on “Scary” Perry Caravello, the weirdo Sam Kinison wannabe and accomplished film extra who plays Fury. Comedians Don Barris and Mole (who always pretends to be stoned and wears an obviously fake wig) have known him for years and like to fuck with him. With the help of producers Jimmy Kimmel and Adam Carolla they convince him he’s auditioning for, then filming, the role of Stone Fury. He’s convinced he’s a great actor (you will disagree) and of course agrees to interviews and cameras following him around for the behind-the-scenes documentary.
END_OF_DOCUMENT_TOKEN_TO_BE_REPLACED

After his unorthodox standup comedy led to his screechy POLICE ACADEMY 2-4 character leading to other movies that aren’t remembered too well other than SCROOGED, Bobcat Goldthwait took the Clint Eastwood or Bruce Lee path: he went rogue to write and direct a vehicle that was more in tune with his voice and talents than what he was being offered. At the time it didn’t get him much more respect than the talking horse one, but this movie holds up and earns him a pass for those other ones in my opinion.
END_OF_DOCUMENT_TOKEN_TO_BE_REPLACED

If you are not familiar with the POLICE ACADEMY saga, I know it must sound like a very scholarly law enforcement procedural, but don’t expect THE FRENCH CONNECTION. Or even POLICE STORY. In my opinion this is more of a “comedy” type of series than a serious analysis of law and order. I guess it’s trying to be a version of ANIMAL HOUSE but with cops instead of non-cops, and more of a “not good at all” type of approach than what John Landis chose to do.
END_OF_DOCUMENT_TOKEN_TO_BE_REPLACED

That spoiler was the first thing I heard about the movie, but it happens maybe halfway through, so I probly shouldn’t have known about it. Anyway, it’s not what it sounds like. Considering that’s what it’s about it’s pretty upbeat. END_OF_DOCUMENT_TOKEN_TO_BE_REPLACED