It’s from AIP so it’s what you might expect from those guys, kinda trashy but kinda dull. 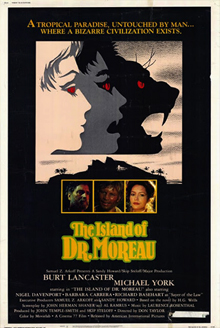 Michael York plays the guy shipwrecked on the island, Burt Lancaster plays the doctor. Both are fine. The opening scene, with York and two others near death in a small emergency boat, is pretty tense, and got me anticipating the mysteries of the island. But when those mysteries reveal themselves they’re not that exciting.

The animal people just live in a cave. I guess that’s easier than building a village ’cause you just shoot them 2 feet in front of a rock wall instead of having to create a whole world behind them. Their designs vary in quality. I suppose we as a society have been conditioned to accept the sight of a wolf man, while the same can’t be said for a boarman or a bearman. Maybe the younger generations will be more accepting of these types of animalmen than mine. I’m sorry, they make me uncomfortable. There should never be a man with a bear’s nose or some shit like that, it makes me sick. Keep it in the cave.

Some of them have good confused expressions, some are just kinda dumb monsters without much personality. I like Moreau’s right hand animal man, he’s the most human but least intelligent looking one. I can’t really decide if he has a good job or a shitty one. He gets to stay in the house instead of some fuckin cave that must smell like wet dogs and bearman piss. There is no evidence of plumbing or even a litterbox in that cave, there’s no way it doesn’t have all kinds of crazy animal-human hybrid shit and pee everywhere. So not having to live in that has got to be a hell of a blessing for this guy. On the other hand he has to serve the food, turn the big crank that raises the gate, gruntwork like that. Nothing that is gonna give him pride or give him opportunity for advancement.

And like many individuals of mixed heritage I bet he feels like he doesn’t quite belong anywhere. Moreau doesn’t respect him, but the animals probly hate him and consider him a sellout. When the shit goes down he stays in the compound with the humans. So his true loyalties come out.

But we really don’t know why he chooses the human team. Does he think he’s a human? Does he think he has to stay because the boar men will consider him a traitor and tear him apart? Or is he just being honorable, knowing it would be a punk move to suddenly switch teams now, when it’s convenient?

There is one aspect of this movie that’s really impressive though, and that’s the stunts with the live animals, and there are alot of them. Due to his scientific pursuits Moreau has a bunch of tigers and lions and shit in cages. And when everything gets crazy at the end they all get let out. There are multiple scenes with characters in animal-person makeup in frame with and even wrestling these big cats. There’s a bear running behind a horse, shit like that. 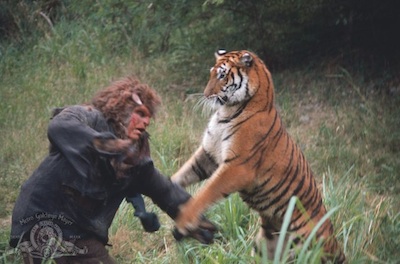 According to the trivia blurb on the back of the DVD the life of the guy wrestling the tiger was saved by the fiberglass helmet underneath his makeup, which got bit by the tiger. Even knowing about these hidden helmets it’s insane to watch these scenes. How did they know it would be safe?

Director Don Taylor did a ton of TV and other movies from the late ’50s to the late ’80s. The one that jumps out at me is ESCAPE FROM THE PLANET OF THE APES, that’s the third one where Cornelius and Zira go into space and get warped back to earth circa the ’70s. He also did DAMIEN: THE OMEN II and that movie some people like called THE FINAL COUNTDOWN.

Burt Lancaster H.G. Wells Michael York
This entry was posted on Monday, December 12th, 2011 at 12:18 pm and is filed under Horror, Reviews. You can follow any responses to this entry through the RSS 2.0 feed. You can skip to the end and leave a response. Pinging is currently not allowed.