That spoiler was the first thing I heard about the movie, but it happens maybe halfway through, so I probly shouldn’t have known about it. Anyway, it’s not what it sounds like. Considering that’s what it’s about it’s pretty upbeat. 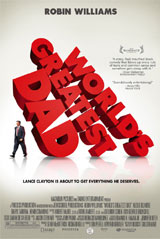 To save himself embarrassment, or to give the kid some kind of dignity that he never came even remotely close to earning, the dad sets it up to look like a suicide, erases the porn and writes a suicide note. The school newspaper ends up getting ahold of the fake letter and printing it, and people in the school who never gave a shit about the kid while he was alive (and with good reason) start seeing dimension in him that was never there, and suddenly everybody was his best friend. He turns into a martyr and an icon, like Tupac or Jim Morrison. So next the dad decides to write a fake journal, which gets published and becomes a media sensation.

This is where I really expected something different. From that premise it sounds like he’s this desperate loser exploiting his son’s death to get a shot at having success as a writer. But it doesn’t really come across that way in the movie. It’s more of an accident, and an act of charity, investing a sensitivity and intelligence into his son’s legacy when really he was just a worthless shithead that everybody should probly be happy is dead instead of out on the streets planning rapes. The dad never seems like a bad guy. The title isn’t as sarcastic as I expected.

I’ve talked to people who thought the movie was hilarious (mostly because of the horrible things the son says), but to me it didn’t even really seem like much of a comedy. I mean, obviously it is, because the movie poster has a white background with red letters. But to me it plays more like a weird drama. There are a couple laughs and clever ideas. I like how blatant he is about using his son’s alleged writings to get his own views across, even using this platform to get goth teens into Bruce Hornsby. And I like how his son’s only friend knows the book is fake because it doesn’t ever mention fisting or felching.

But I think the movie is less successful in its portrayal of the kids at the school becoming obsessed with his dead son, wearing his face on t-shirts and stuff. It’s not at all believable and wasn’t really funny to me, so it fell flat. And it’s yet another movie that suffers by being compared to HEATHERS, which Goldthwait acknowledges as the originator of the “school exploits suicide of kid they didn’t care about alive” satire by naming one of the characters Heather.

Still, it’s an unusual movie and it kept me interested. I’m not sure Goldthwait will ever be a great director, but I respect that he follows his whims and makes uncommercial movies on his own dime, and still gets Robin Williams to star. I’ll have to revisit his other directorial works – I remember SHAKES THE CLOWN being funny and I really liked his practical joke movie WINDY CITY HEAT. Never saw the one about bestiality though.

Williams is actually very good in the role. It’s a rare one for him – it’s not even like ONE HOUR PHOTO where he plays it all serious and creepy. He gets to make jokes and be funny to charm people but just in a subdued way where he’s not running around talking in funny voices and effectively daring you to hit him on the head with a mallet. I actually liked him in this movie, even if it made me a little uncomfortable to hear him talking to his neighbor about zombie movies and quoting Simon Pegg about fast zombies. I guess I should be more uncomfortable about the scene where you see his dick.

Sabara is also good, in fact perfect. It’s funny that the spy kid is so good at playing assholes now (he was also the bully who young Michael Meyers ended up beating to death in the HALLOWEEN remake). Most of the other characters, though, are your usual local production indie inexperienced type of performances, no offense to my native Seattle where it was filmed. It just has that cheap-but-well-meaning indie vibe. But with Robin Williams.

I don’t know how the fuck you try to sell a movie like this. It’s hard to explain. The only way to reel me in was to reveal the entire plot. And it turns out there are other people who will hear that same information and not be sold on it like I was. When I used Google to figure out what school they filmed at I found an article about it on the Seattle Public Schools community blog. It talked about the production and when Robin Williams would be in town and said, “I won’t tell you the plotline – it’s crude and not particularly interesting.”

Bobcat Goldthwait Daryl Sabara filmed in Seattle Robin Williams
This entry was posted on Tuesday, December 8th, 2009 at 3:03 am and is filed under Comedy/Laffs, Reviews. You can follow any responses to this entry through the RSS 2.0 feed. You can skip to the end and leave a response. Pinging is currently not allowed.