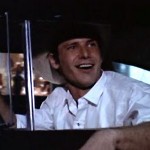 BLADE RUNNER is an amazing work of sight and sound, a groundbreaking depiction of future worlds, a gloomy cinematic nightmare, a unique approach to science fiction, and a complete fucking bore. Watching it on the big screen for the limited theatrical engagement of this “definitive cut” I was struck by how beautiful it looked and sounded, and also I wanted to take a nap. It’s like watching the greatest ant farm ever constructed.

Well, shit. I can’t believe I’m writing this. I know I’m only one paragraph in but I would like to extend my sincerest apologies. This is what you call a guilty un-pleasure. It’s easier for me to picture myself reading this review, written by somebody else, and pulling my hair out, than me sitting here writing it. But here I am. I always dug this movie. Never got why anybody would consider it Ridley Scott’s best (Motherfucker directed ALIEN. ALIEN! That’s his masterpiece, people. Let’s get this straight) and thought it was a little slow. But I always dug it and I was excited to see it on the big screen here. But facts are facts. I am a journalist, or whatever. I have to admit: this one time anyway, BLADE RUNNER bored the shit out of me.

Don’t get me wrong – everything everybody always loved about it is still there. The world of the movie is undeniably great, all the detail in that city, the sounds, the lighting. I’m not sure what they did with the effects for this new edition but it worked, nothing looked too dated but also didn’t look CGI-ified. I haven’t seen the movie for years and I have no idea what was changed in it (although obviously it’s like the director’s cut, no narration and the fuckin unicorn is in there).

But the thing that never bothered me before, but that I couldn’t get past this time, was the who gives a shit factor. The yeah but what about having a good story and characters dilemma. Of course the idea is cool, the replicants, the flying cars, the origami. But after all these years I was looking for something beyond that and I just kept wondering why I was supposed to give a shit about this blade runner dweeb, a guy too sissy to turn down an immoral job, not even that good at the job when he does it, not passionate about anything he does except in one part having forceful sex with a robot, a guy who dreams about a fuckin unicorn.

I repeat: he dreams about a unicorn, a magic fairyland horse with a horn that runs in glimmery slow motion. That is what inhabits this dipshit’s deepest inner thoughts. That is the character that is supposed to anchor us in this world. Harrison Ford, so cool and funny as Hans Solo and Indiana etc., has had every last drop of humor and charisma sapped out of his body for this role. They squeezed it into a mason jar and sealed it under 25 feet of solid concrete so none of it could seep out during filming. Fifteen years later Ridley Scott himself took part in a secret moonlight ceremony where they unearthed the jar. The charisma inside had dried up and shriveled into a tiny stone which Ford then began to wear as an earring.

Obviously this is supposed to be kind of like a film noir or a hardboiled detective story, but Deckard is no Sam Spade. Those stories have anti-heroes who are witty fast talking guys, or tough talking hardnosed bastards. Not this guy. This guy barely smiles, barely frowns. He’s not cool. He’s not exciting. The one part where he seems to have a sense of humor is when he puts on a cartoony “nerd” voice while talking to Zhora, at which point you wish maybe he didn’t have a sense of humor at all because that whole thing is pretty awkward.

The other bad news: his girlfriend is less interesting than he is.

Okay, I get it, they’re (maybe) robots. That doesn’t make them not boring. And besides, Roy and Pris are robots too, but they’re cool and funny, they have personalities and passion, anger and amusement. This time around, I honestly was not interested in what was going on in the movie until 2/3 of the way through when it was about Pris at J.F. Sebastian’s place and she says “Hi Roy.” That was when I realized the problem was Deckard. This is the longest stretch of the movie to not have Deckard in it and all the sudden it becomes a way better movie. If only the two lead characters were removed from the movie I could agree with everybody else that it’s a masterpiece. All the supporting characters are really good actually, it’s just that pesky central character who is the focus of almost the entire movie.

It’s hard not to root for the bad guys here. What they’re doing is no less immoral than what Deckard is doing. They’re escaped slaves. They’re trying to defend themselves. They’re programmed to die and they want to reverse that. They do kill a couple people, and that is wrong. But they are doing it for a cause. Deckard is killing them and not for a cause, he’s doing it for the money. Maybe not even for the money, maybe just because he’s too apathetic and wimpy to turn down the job. And it’s not even his job anymore. It’s his former job. So don’t give me that just doing his job shit. He knows it’s wrong. So if they’re both wrong, and the good guy is so boring he might as well be replaced by a paper plate with a smiley face on it taped to the back of a chair wearing a coat, of course you’re gonna root for the weird cute clown lady who does flips and the crazy passionate bastard who mutilates himself and recites poetry while crying in the rain but does not as far as we know ever think about a fucking unicorn.

Of course, that is a strength of the movie, that those characters are so strong. I just wish they appeared earlier in the movie to liven things up. Or at least let Brion James live a while longer. Or have Edward James Olmos be the main blade runner instead of Harrison Ford. Or have Billy Dee Williams play Deckard. Or go with the paper plate taped to a chair idea I mentioned, that was a pretty good idea.

I must admit, I have not gotten enough sleep lately. So it’s partly my fault. I implore you, be very awake when you watch BLADE RUNNER. This is especially important because of Vangelis, who apparently scored the movie with tunes he had leftover from a hypnotism tape he worked on. Or an illusionist’s act. When the end credits came up and he started doing some low down John Carpenter/THE WARRIORS type shit I thought where the fuck was he keeping that during the movie? Try to put everybody to sleep with your magic show soundtrack and then wake them up at the end credits so the ushers can clean the theater.

I guess people love this whole idea that Deckard is (maybe) a replicant too, maybe even one of the escaped replicants reprogrammed for some reason to think he has a past with the police department. I admit that it never occurred to me back in the day when I watched this, and I thought it was pretty cool when I heard about it. But watching it now (in a version that leaves you with the origami unicorn as the last thought, so either you’re supposed to think his stupid dreams are implanted or it’s just a reminder that this guy is a sissy) I’m not sure this whole idea holds water. It’s kind of stupid, actually. To kill these robots all he does is shoot them. One of them, the only one that was hurting anybody, he doesn’t even kill, the guy’s time just ran out. So really, he has not done anything to make anyone’s life better, he’s only killed two harmless robots shortly before their time. Any human could’ve done the same crappy job he did, and many could’ve done a funnier voice when interviewing Zhora.

(Actually, to be fair, by killing Zhora he may have created a job opening for a human snake dancer. So it may have had a positive effect on the economy, you could make that argument.)

If they wanted to do a good job, why wouldn’t they have gotten a robot that has super-strength and agility like the blades it’s hunting? And why would they have to trick it into thinking it’s human? Why not make it competent and aware of its abilities? Maybe there’s some kind of obscure union rules they need to follow or something but otherwise I can only assume these police are both incompetent and completely crazy. That is a horrible god damn plan. You’re never gonna stop runaway androids with this moronic approach to law enforcement. Shit, send Olmos out there on his crutches, give him a sock full of quarters, he would do a better job than ol’ Grumpy McUnicorndreams. I guess maybe dismantling replicants is too expensive so they just send a shitty one like this out on a useless mission to get him out of their hair.

For years I always heard how this movie was misunderstood at the time, and I always believed that. Well, undeniably it has been a huge influence on other movies and has stood the test of time. Its strengths are more than enough to justify its legend and I was happy to see it again even lacking the ability to fast forward it to the good part at the end. But I can’t help but think you know what, maybe they weren’t wrong at the time. Maybe the people who were ahead of their time were actually the people who said from the beginning that it was a brilliant failure, not an actual masterpiece. I don’t know.

I do know this: THE THING came out on the same day. Both movies got some real bad reviews and suffered from comparisons to lovable E.T. THE EXTRA-TERRESTRIAL, which came out a couple weeks earlier. Of the two anti-E.T.s though, I gotta go with THE THING as the more powerful viewing experience. BLADE RUNNER is more innovative, THE THING is more watchable.

Oh well. Nice try though Ridley Scott, maybe your next cut will be the one that brings it home.

Ridley Scott Rutger Hauer
This entry was posted on Monday, November 5th, 2007 at 9:27 pm and is filed under Action, Reviews, Science Fiction and Space Shit, Thriller. You can follow any responses to this entry through the RSS 2.0 feed. You can leave a response, or trackback from your own site.