ah, shit. I can’t explain it. There is no rational justification. But she does it. (Off screen, thank the Lord.)

Now it’s years later. She would never do it again. She’s happily engaged. To a human man (Bryce Johnson, BRING IT ON AGAIN). And they start talking about the freakiest things they ever did. So it’s a movie that questions and explores the ideal of Total Honesty In Relationships. Which is better, for her to not have any secrets from him, or for him to not have to think about his fiancee sucking a dog’s dick? 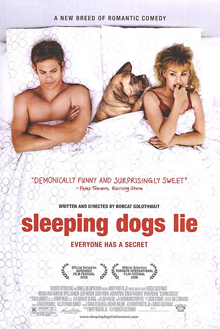 For a while it’s kind of a MEET THE PARENTS with bestiality. They go stay with her mom and dad (Geoff Pierson and Bonita Friedericy) and your discomfort sympathies shift to the boyfriend. He keeps embarrassing himself and getting the cold shoulder from Dad, who gets the dynamic started with “I’m not naive, I know you’re having sex, but while you’re here you’ll be sleeping in separate rooms.” Always a good icebreaker. The movie becomes just as much about her relationships with her parents and her meth-smoking asshole brother (Jack Plotnick) – the secrets they keep from each other, the illusions they have about each other.

One strength it has that many independent movies don’t is that the cast of all no-names is excellent. This Bryce Johnson guy must rue the day he first heard the name “Armie Hammer,” because he’s a similar tall-handsome-charismatic-but-down-to-earth type but at least so far hasn’t had the same luck getting big roles. (On the other hand Hammer never got to film the movie where he was gonna play Batman, Johnson did get to do the voice of Aquaman in a video game. Point: Johnson!)

But Hamilton is the real find here. The scene where she SPOILER admits what she did and then pathetically tries to play it off like she was just kidding must’ve been ridiculously hard to pull off, but these two get it exactly right. Just excruciating and heartbreaking. You’ll find out what it feels like when your heart cringes. An incredible scene.

One thing that’s ingenious about the story is that the idea of it is so disgusting, you (or at least I – I’m not sure what you guys are into) have the same visceral reaction to her secret that her boyfriend and family do. They don’t show it at all but you keep picturing it and it’s disgusting and you try to reconcile it with this nice girl. We’ve known this about her from scene 1, and we’ve built up sympathy for her anyway, but we don’t like thinking about it any more than the other characters do.

I would think this was one of those movies where they came up with the concept and title together, except they didn’t – it was originally called STAY. Who would’ve thought there’d be two perfect double entendre titles for a dog-sex relationship drama? I guess the original is the more subtle bestiality pun.

I’ve known about this movie for years and was sort of interested to see how Goldthwait would approach the outrageous premise, but I have to say it’s a much better movie than I ever would’ve imagined. Maybe I’m just in a weird place, but I found it genuinely moving at the end.

(note: that is not saying I relate to any of this dog stuff. I don’t have pets and don’t believe in bestiality, I think it’s unethical and gross in my opinion. Not to get too preachy but try to stay away from it everybody.) 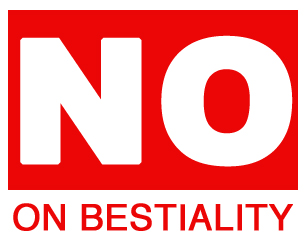 bestiality Bobcat Goldthwait Bryce Johnson Melinda Page Hamilton
This entry was posted on Sunday, July 1st, 2012 at 9:03 pm and is filed under Comedy/Laffs, Drama, Reviews. You can follow any responses to this entry through the RSS 2.0 feed. You can skip to the end and leave a response. Pinging is currently not allowed.