The DVD cover brags about an “All star cast!,” which is stretching it, but the huge ensemble cast does include an impressive lineup of character actors, some of them better known now than they were then. You also got Ned Beatty, Brion James (BLADE RUNNER, 48 HOURS), Michael Lerner (MANIAC COP 2), Michael McKean, Jeffrey Tambor, Stephen Tobolowsky, Christopher Lloyd, Larry Miller (FOODFIGHT!), Corbin Bernsen, Bobcat Goldthwait, Dylan Baker, Robert Klein and Harvey Korman (The Star Wars Holiday Special). Candy Clark and Bo Hopkins of the AMERICAN GRAFFITI saga show up together. Since there’s sort of a variety show going on at the center of it there are appearances by Rosemary Clooney, George Burns, Joey Lawrence (as a dreamy crooner) and even Billy Barty (WILLOW). Also Gary Anthony Williams, the voice of Uncle Ruckus on The Boondocks, made his first movie appearance. END_OF_DOCUMENT_TOKEN_TO_BE_REPLACED 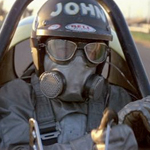 The impressive part is the structure. We find the gang back together on New Year’s Eve, 1964. Laurie (Cindy Williams) is now pregnant with twins, married to Steve (“special appearance by Ron Howard,” but it seems like a genuine role to me, not a cameo). Debbie (Candy Clark) and Terry the Toad (Charles Martin Smith) are still together, but he’s shipping out to ‘Nam tomorrow to “Kick ass, take names and eat Cong for breakfast.” They all come visit their cool drag racer friend John Milner (Paul Le Mat) at the track, where he’s trying to win races, attract a sponsorship and build a legit driving career. So it seems like it will be another day-in-the-life with this group of friends as they’re all on the verge of major life changes. END_OF_DOCUMENT_TOKEN_TO_BE_REPLACED 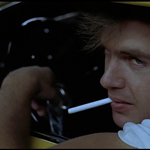 I’m not sure what the title means exactly, but it’s kinda too bad they used it for this because it would’ve made WILD STYLE seem more epic and important. This is the story of a bunch of Modestenos graduating high school in 1962, and having one last night out together before some of them leave to begin their adult lives. Curt (Richard Dreyfuss playing a teenager just two years before JAWS!) is supposed to leave for college on the East Coast the next day, but he’s getting cold feet. Steve (Ronny Howard, later star of Happy Days) is also leaving and wants to convince his younger girlfriend Laurie (Cindy Williams, later star of Happy Days spin-off Laverne & Shirley) that they should still technically be together but also see other people. Terry (Charles Martin Smith, later in THE BUDDY HOLLY STORY) is a huge nerd who borrows Steve’s awesome car to drive around and impress people. And John Milner (Paul Le Mat) isn’t going to college, so to him it’s another night as the tough guy cruising for girls in the area’s most badass yellow drag racer. But then he gets tricked into picking up somebody’s little sister Carol (Mackenzie Phillips), cramping his style. END_OF_DOCUMENT_TOKEN_TO_BE_REPLACED 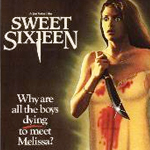 Melissa, being the new girl in town, walks up to Longshadow in the parking lot and asks if he wants to “ditch the old man and go party.” As he bluntly rejects her a couple of the racists yell at him that he’s “into little girls.” He starts walking in their direction and they run away like they’re being chased by a bear. END_OF_DOCUMENT_TOKEN_TO_BE_REPLACED When they go to a safe house, Locken goes to take a shower and Hansen turns traitor, killing the defector they’re supposed to be protecting and then trying to cripple his partner. When he’s standing there naked with a gun pointed at him Locken doesn’t even get scared because he can only comprehend it as a joke. He really thought he knew that guy, now he’s shooting him in the shower? He never took him for a shower-shooter.
END_OF_DOCUMENT_TOKEN_TO_BE_REPLACED

This was of course the same team that made MANIAC COP, and this is basically MANIAC SOLDIER. The maniac is Sam Harper (David ‘Shark’ Fralick), killed in a friendly fire incident during Desert Storm, not found until 3 years later. His burnt corpse is shipped back and sits in a flag-draped coffin at his widow’s house for the memorial service. But when his idolizing nephew Jody (Christopher Ogden) puts his box of medals inside the coffin for some reason that turns him into a vengeful zombie just in time for the town’s 4th of July celebration. (Also he pins the medals into his burnt flesh.) END_OF_DOCUMENT_TOKEN_TO_BE_REPLACED

This is his most straight-forward crime genre picture before SAVAGES so I figured it was a good one to check out. Based on the book Stray Dogs by John Ridley (RED TAILS, UNDERCOVER BROTHER), it’s about this dirtbag Bobby (Sean Penn), an ex-tennis player in debt whose fancy-ass car breaks down in the middle of Tiny Desert Town, Hell (actually Superior, Arizona) on his way to delivering a bunch of cash to the guy who cut off some of his fingers, and then things get way worse. But he fucks Jennifer Lopez at least. END_OF_DOCUMENT_TOKEN_TO_BE_REPLACED