Well, that’s not the WINDY CITY HEAT you’ll sit down to watch, though. That’s the movie-within-the-movie. The movie that we can get on DVD is an elaborate practical joke played on “Scary” Perry Caravello, the weirdo Sam Kinison wannabe and accomplished film extra who plays Fury. Comedians Don Barris and Mole (who always pretends to be stoned and wears an obviously fake wig) have known him for years and like to fuck with him. With the help of producers Jimmy Kimmel and Adam Carolla they convince him he’s auditioning for, then filming, the role of Stone Fury. He’s convinced he’s a great actor (you will disagree) and of course agrees to interviews and cameras following him around for the behind-the-scenes documentary.

It sounds mean, but the guy is such an asshole that I found myself surprisingly okay with it. He’s a self-described homophobe (I don’t think he understands that the word has negative connotations) so it’s funny to see his discomfort when Tom Kenny as a flaming costume designer fits him for a skimpy cowboy outfit (it turns out to be a mistake – it was for Luke Perry, he says). In Scary Perry’s defense he is sometimes nice, defending his puppy-like personal assistant when Barris is fake-rude to him, for example. (On the other hand he keeps making that guy stand on the side of the set holding a plate of food in case he wants to eat it later.)

I should note that at one point Perry brags about having “Steven Seagal smoothness.” 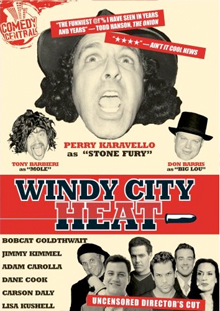 The big joke is seeing how far the pranksters can push the ridiculousness of their fictional scenario without Perry catching on that it’s all bullshit. The answer is “how far you got?” They introduce him to people supposedly named Roman Polanski, Susan B. Anthony and John Quincy Adams without him raising an eyebrow (an acting technique he considers a trademark, by the way). The producer’s receptionist looks like a Chippendale, he’ll come in with suspenders and no shirt to deliver a phone message and Perry won’t seem to think it’s weird. They convince him that Adam Corolla is on the same lot to film a gladiator-dog buddy movie, that Perry has to use a stunt double for a sex scene and then the double’s footage can’t be used due to actual penetration, that the Japanese financer cancels the movie because he’s outraged that a table of donuts and potato chips gets knocked over, that if they’re late to the premiere the movie will never be released, that he got the role over Robert DeNiro, Bruce Willis, Arnold Schwarzenegger and others.

In one classic moment Perry comes to audition right after another actor who supposedly killed. They cross paths when the other guy is leaving, and it’s Carson Daley. He’s dressed just like Perry with trademark fedora and fanny pack, and the look on Perry’s face is more jealousy than disbelief.

It seems like the only thing he doesn’t fall for is the Charlton Heston lookalike that refuses to leave the trailer Perry is supposed to get. He knows the guy isn’t really Heston but seems to just chalk it up to some weirdo being in his trailer.

This is another one directed by Bobcat Goldthwait. He didn’t direct for about ten years after SHAKES THE CLOWN, but in the early 2000s he started doing it for TV, including Chappelle’s Show and episodes of Crank Yankers and The Man Show for Kimmel and Corolla’s production company Jackhole Industries. Barris was the warmup comedian for The Man Show, and this seems to be his baby. But I think Goldthwait probly deserves some credit for the way the movie is presented. I love how it’s all presented dryly. Other than a few lines of text at the beginning explaining that it’s all a joke on Perry, the filmatism seems to play along with it being a behind-the-scenes documentary. They even put the obviously fake names of the characters on screen as if they believe they’re real: “Hiroshima Nagasaki, investor.”

Goldthwait also plays himself directing the Stone Fury movie. So I bet Perry at least thought he was starring in a comedy (I think the movie wants you to believe he thinks it’s a serious neo-noir). It’s a good acting performance by Goldthwait though because he has to be deadpan about being ridiculous or the gig is up. (Or possibly up. This guy seems weirdly gullible). The two main reoccurring jokes for Bobcat are his pride in saying “and…. act!” instead of “action!” and that he always talks into a megaphone, even when in a small office. He explains to Perry that he has to speak into it at all times or he’ll forget to when he’s on set directing.

This is a uniquely funny movie. I don’t really know what else to compare it to. It’s the kind of concept that some wiseasses might dream about but that you’d think nobody would actually be able to do: fund and produce an entire movie strictly for the purpose of fucking with their crazy friend. And this crazy friend happens to be really funny to watch partly because when he gets upset enough he starts screaming in a high pitched voice. And he gets upset pretty easy.

I’ve seen this a couple times now and it still makes me laugh. I’ve just discovered that there’s also a “Big Three Podcast” where Don and Mole continue to fuck with Perry. In the one I’m in the middle of they’ve convinced him that “one of Hollywood’s biggest animation studios” has offered him $100,000 to do a few lines of voiceover work, but that the movie is about how the government was behind 9-11. He’s going back and forth on whether or not to accept it.

Bobcat Goldthwait
This entry was posted on Wednesday, June 27th, 2012 at 2:10 am and is filed under Comedy/Laffs, Documentary, Reviews. You can follow any responses to this entry through the RSS 2.0 feed. You can skip to the end and leave a response. Pinging is currently not allowed.