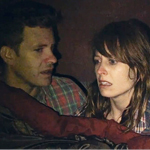 WILLOW CREEK is the latest Bobcat Goldthwait directorial work, but mostly it’s just the latest found footage movie. This one is about a couple visiting the area in Northern California where the famous (admitted hoax I thought, but I guess not) Sasquatch footage was filmed in 1967, retracing the journey of the filmers and making their own video about it. Boyfriend Jim (Bryce Johnson, also star of Goldthwait’s SLEEPING DOGS LIE) is a believer, but has enough of a sense of humor about it that a stranger angrily tells him “It’s not a joke!” after seeing him film in front of a wooden Bigfoot statue. Girlfriend Kelly (Alexie Gilmore, SURFER, DUDE) has to confess complete Bigfoot atheism, which leads to some tension and arguments. She’s just going along to have fun with her boyfriend, but it upsets him that they’re not on the same page.

The beginning part is kind of a celebration of kitschy touristy Bigfoot shit in the town of Willow Creek, self-declared as “Bigfoot Capital of the World.” They eat foot-shaped Bigfoot Burgers, stay in the Bigfoot Hotel, check out various murals and statues. They also interview a bunch of locals, most of them real people who might think it’s for a real documentary, and those are the best parts. There’s a nice old lady at the visitor center who doesn’t believe in Bigfoot at all and seems to sort of pity Jim for being so gullible. There’s a normal-seeming lady who tells a detailed story about an alleged encounter when she was a kid. There’s a guy who runs Bigfoot Books who tells them in detail about the history of what it turns out is called “the Patterson-Gimli film,” how to get to the isolated location where it was filmed, and different insider tips and jokes from the “Bigfooter” community. They hear locals sing songs about Sasquatch. Squatch Rock. Well, Squatch Folk, more like. 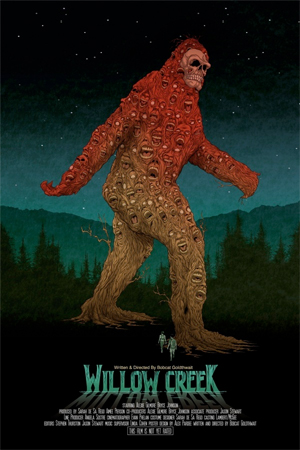 Then it gets into the isolation of the woods, being out in the middle of nowhere, the fear of the unseen, most of the usual scare techniques used in most of the usual found footage movies. Very much like THE BLAIR WITCH PROJECT it gets all its scares from weird sounds at night, not showing things but making you imagine them. At one point something (spoiler) pushes against the tent they’re in – it is literally a thing that goes bump in the night. And to be fair that’s a bigger event than the climactic “oh shit a door closed” scene in PARANORMAL ACTIVITY.

There’s a long section that’s just a shot of the two in a tent listening to odd noises – wood banging against wood, walking, breathing, “vocalizing” as Jim keeps calling it. This section is maybe 15 minutes, maybe longer, alot of it one unbroken take. It’s very effective but also very much what everybody else does with found footage.

That’s the problem. If this is just seen as another new found footage horror movie then it’s fine. It’s the one that’s bigfoot instead of a ghost or witch. But most people will see it for the same reason I did: it’s the new Bobcat Goldthwait movie. And it’s a little disappointing in that context. Every other movie he’s directed is very unusual in some way and difficult to categorize. I don’t love all of them, but they’re all unusual and uniquely Bobcat. When I heard he was doing this I had no problem breaking my found footage boycott for it because I assumed that meant he would do his own crazy take on the format, some clever new approach to it. Nope.

Wikipedia lists 81 found footage movies that have come out just since the subgenre was re-popularized in 2007. That’s not including the one that I wrote years ago for one of the commenters to make after saying I thought some of you guys could do one just as good as PARANORMAL ACTIVITY. (I believe it was filmed but it was never sent to me, so maybe I was wrong.) There are definitely some fun variations that have come out but overall this is not a formula that is very rehashable, in my opinion. At one time the cheapness and minimalism was a novelty, now it’s a detriment and a sign of laziness. It’s more possible than ever to do alot with nothing, and Goldthwait has already done it before. But at least he’s just messing around with this one, it’s not his first and only movie. I forgive him.

But it’s not hugely different from what the kids do. He does all the familiar tropes: starting out light hearted, eventually everyone is stressed and snipping at each other, there’s a guy who threatens them and says they have to leave (THE LAST EXORCISM), they get lost in the woods and realize they’ve been somehow going in circles for hours (BLAIR WITCH), there’s the part where somebody tells them to turn the camera off, where somebody pretends to turn the camera off but doesn’t (in this case as a joke), where they find their stuff has been messed with by an unseen party, where one character gets annoyed that another still cares about filming. On the commentary track Goldthwait confesses that they even had a scene where Kelly leaves a tearful video message for her mother, but then they realized that was exactly what happened in the most famous scene of BLAIR WITCH. And of course I don’t even have to tell you there’s the ambiguous, abrupt ending where they finally come face to face with the threat but (SPOILER? UNSPOILER?) you don’t see it on camera. No Sasquatch suit required. Go home, Rick Baker.

I wonder if he tried calling Rob Zombie? I bet he’d have an extra Sasquatch suit laying around somewhere.

Goldthwait apparently does believe in Sasquatch and decided to do this over an initial idea of a mockumentary about Bigfoot enthusiasts when he realized they weren’t in any desperate need of being taken down a notch. I respect that, but I kinda wish he’d decided to make a real documentary then. That’s the most interesting stuff in this movie and the Sasquatch documentary is a genre that could benefit more from his touch, I bet.

The actors are good, it’s all well executed, it’s only 79 minutes including credits, not bad. I guess it just comes down to me believing that it’s a worn out subgenre not worthy of his time if he’s not gonna try to reinvent it. But if your expectations aren’t as high you’ll be fine.

Alexie Gilmore another fucking found footage movie Bobcat Goldthwait Bryce Johnson sasquatch
This entry was posted on Wednesday, September 10th, 2014 at 9:33 am and is filed under Horror, Reviews. You can follow any responses to this entry through the RSS 2.0 feed. You can skip to the end and leave a response. Pinging is currently not allowed.