The first two were location-based premises (the White House is attacked, London is attacked), this one makes the fair assumption that if we’re still watching these we’re okay just following legendarily amazing Secret Service agent Mike Banning (Gerard Butler, DRACULA 2000) whether he goes to a new city that gets attacked or not. “ANGEL” refers to him, a “guardian angel” who has “fallen” by being blamed for an attempted assassination of the president and having to go on one of those old fashioned fugitive runs to prove his innocence.

I was correct in my belief that Aaron Eckhart had been president in the first movie, but I can’t really take credit for that since I wasn’t 100% sure I wasn’t thinking of the Channing Tatum one. I guess the office holder who ties the series together is Allan Trumbull (Morgan Freeman, UNLEASHED), who was the Speaker of the House, then Vice President, now President, presumably Super President in the next one. Banning is protecting him during a fishing trip when a swarm of drones attacks, leaving both of them unconscious and everyone else dead. The FBI, under the command of Special Agent Helen Thompson (Jada Pinkett Smith, DEMON KNIGHT, filling one of the slots for overqualified supporting cast members), finds a van that has been left behind with evidence implicating Banning in the attack.

Also every once in a while Banning pops a couple of pills and gets blurry vision, so you know there is some drama here, some inner turmoil, some characterization. Nah, I shouldn’t make fun of that. He has sustained injuries from whatever action stuff he must’ve done in the other ones, and it has turned into a painkiller addiction, and there is no fucking way he should be allowed anywhere near the job of protecting the president. This is a good thing to address. (I bet it won’t be mentioned in the next one though.) 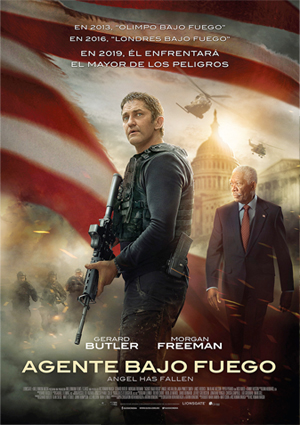 An immediately annoying thing about this chapter: it seems convinced you’re gonna spit out your coffee when it “reveals” things you obviously figured out long before. For example, the big shootout at the beginning. When they stop fighting, take off their helmets and laugh I think we’re supposed to go “What? Why aren’t they— wait a minute, you mean to tell me those weren’t real bullets? It was just practice? And that’s why it’s in this enclosed obstacle course thing and they’re all wearing the same gear? Ha ha, You got me, bro! You got me!”

One note about this sequence. Since it was obviously an exercise I thought Banning was a fucking asshole for throwing a guy down a set of stairs. Then I was happy when the guy confronted Banning for being a fucking asshole and throwing him down the set of stairs. However, the movie pulls a TOP GUN and pretends like that guy is a wet blanket who should be ashamed of himself for trying to interfere with how awesome Banning is. Also the guy later proves to be evil, so Banning got lucky like when the Toxic Avenger killed that old lady and she turned out to be a sex trafficker.

The practice space belongs to Banning’s old war buddy Wade Jennings (Danny Huston, CLASH OF THE TITANS), who he loves so much, because they’ve been through the shit together, and they’re like brothers, and only someone who’s been through it could really understand what it’s like and every single person watching figures out within 30 seconds that he’s gonna be the villain. But don’t tell the movie that.

And then when comically dweeby Vice President Kirby (Tim Blake Nelson, FANTASTIC FOUR) nervously, reluctantly, really really hoping this is only temporary, takes the oath of office, of course we know he’s the mysterious distorted Cobra Commander voice heard directing Jennings’ evil operation. And this is confirmed when the vice president calls a press conference to announce that the intelligence agencies have unanimously concluded that Secret Service agent Mike Banning and Russia were behind the attack. Still, a later scene goes from the distorted voice to the VP in his office like it’s a big reveal.

From what I can remember, the action is probly a little better than in the other two. The assassination attempt is easily the most interesting sequence, with the swarm of armed drones that security initially mistakes for bats. Director Ric Roman Waugh (FELON, SNITCH, SHOT CALLER) and/or stunt coordinator Greg Powell (THE FOREIGNER) seem to really love filming bodies being flung into the air by explosions. Often on fire. Always kinda cool, though quickly becoming repetitive.

I think there was also some truck crashes or something. Fairly generic. The climax is a mano-a-mano between our hero and villain on a rooftop surrounded by obvious green screen, perhaps as a tribute to THE PROTECTOR 2 or THE ROOM. It would help if the personal conflict was really involving, because the fight is not the kind of thing where you believe these men are great warriors. It’s just two tired guys with way too much gear on clumsily hitting and stabbing each other in close up for a minute. But I did sincerely like the aftermath, when Jennings is dying of blood loss, tells Banning “I’m glad it was you,” and they sit together waiting for the end.

I guess I’d have to consider the politics of this one less horrendous than those of part 2, because it doesn’t glorify and swagger about American military might – his goal is even to stop a war. At the same time, they clearly designed it to keep delusional Trump worshippers on board. Sure, there’s one reference to Russia interfering with the 2016 election, but the story revolves around false accusations of “Russian collusion.” What a silly idea! It would never happen! When everything is cleared up there’s a news report that says tensions have cooled and the great and wise President Trumbull is FORREST GUMPed into footage from the G20 so that he turns and smiles at the real Vladimir Putin. I wonder if they told Freeman they were gonna do that to him? 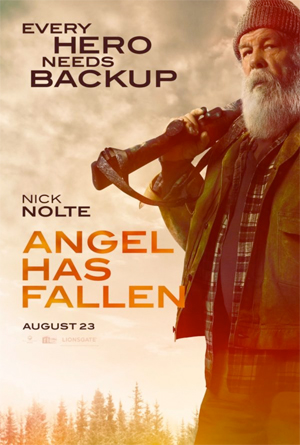 There are two reasons I bothered to write a review of this. One is completism. I reviewed the other two, might as well keep going. The better reason is Nick motherfucking Nolte. When Banning is on the run he goes into the woods to find his long estranged father Clay, played by Nolte. He clearly is meant to be Living Off the Grid and his cabin, shaggy beard, manual typewriter and discussion of a manifesto imply that he’s a Unabomber type. (Of course after we get the idea it’s explicitly pointed out in dialogue.)

They fight a little bit about Clay being a drunk who abandoned Mike and his mom, then Clay spots an approaching team of killers on his security cameras so they go into his secret underground tunnel system (like RAMBO: LAST BLOOD!) and pull a bunch of ropes that self-destruct his house and massacre the attackers with an admirably ludicrous number of fiery explosions.

That stuff is pretty funny, but what actually makes the movie worth existing is that trademark Nolte By Nature professionalism. He treats it the same as he would if he was working with James Ivory or Scorsese or Malick again. In his later years he’s mastered the weathered, broken, regretful, ornery sonofabitch with the messy hair, the pickled liver and the tearful breakdown, so he’s gonna play a million variations on it and it’s gonna be humane and moving and perfect every god damn time, even in this part 3 to a mediocre and lowbrow series. He has a scene where he yells with that ragged voice about being sent to Vietnam and Mike being sent to Iraq and I swear to you for a minute it’s heartbreaking. Likewise the scene where they part ways and Clay yells for Mike to wait and then can’t bring himself to say he loves him or he’s sorry or whatever so he just nods. Beautiful.

And at the end when the action movie shit is wrapped up and there’s still an epilogue about father and son mending their relationship I actually did care about it. Keep in mind this is in a movie where they recast the hero’s wife from Radha Mitchell to Piper Perabo and I only noticed because of online reference materials.

(For some reason there’s also a comical mid-credits scene where Banning and his dad go to a sensory deprivation tank together.)

Like the rest of the series, this one has a story credited to Creighton Rothenberger & Katrin Benedikt (EXPENDABLES 3). This time the screenplay credit goes to Robert Mark Kamen (THE KARATE KID, LETHAL WEAPON 3, THE FIFTH ELEMENT, KISS OF THE DRAGON, THE TRANSPORTER, TAKEN, COLOMBIANA) and Matt Cook (TRIPLE 9) & the director. Waugh is another stuntman turned director – he worked on THE BLOB, THEY LIVE, ROAD HOUSE, HARD TARGET and more before helming a few features including well-regarded DTV movies FELON and SHOT CALLER. I’ll probly check those out eventually (as well as his 2001 debut about stuntmen, IN THE SHADOWS), but they don’t have Nick Nolte in them. This does. I’ll give it that.

Gerard Butler Jada Pinkett Smith Lance Reddick Morgan Freeman Nick Nolte Piper Perabo Ric Roman Waugh Robert Mark Kamen Tim Blake Nelson
This entry was posted on Tuesday, December 3rd, 2019 at 11:28 am and is filed under Action, Reviews. You can follow any responses to this entry through the RSS 2.0 feed. You can skip to the end and leave a response. Pinging is currently not allowed.

49 Responses to “Angel Has Fallen”