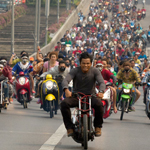 By the way, who’s the sorry motherfucker who found it necessary to introduce green screens to the Thai film industry? There’s this whole great sequence of Jaa fighting motorcycles on a rooftop, and I’m sure most of the stunts are real, but because the background is clearly fake you start questioning the whole thing. They even use green screens for his closeups when he’s holding onto the top of a car. I guess we’re past the days when Thai stuntmen were the crazy motherfuckers who would do anything. They must’ve finally gotten a union.

The sad part is that some of the CGB (computer generated business) is supposed to jump out at me, because the movie was shot in 3D and uses alot of the comin’ at ya type gimmicks I like (bucket of water thrown at camera, weapons shooting out of the screen, lots of flying debris)… but I don’t have that option, because Magnet released it straight to video-on-demand. It’s supposed to play some theaters in May, and I will be as displeased as bad punch if they don’t show it in 3D here, seeing as how it was my idea:

In my opinion the first TOM YUM GOONG is the unacknowledged action classic of the century so far, on most days my favorite non-KILL-BILL fight movie of the era. So when the sequel has scenes that are references to or rehashes of part 1, they inevitably don’t stack up. The attack on a mansion, with bodies flying as the result of an unseen Jaa force, is kinda stiff compared to his similar knee-first party crashing last time. The MORTAL KOMBATty flames in the burning room fight look pathetic compared to the old school pyrotechnics and flooding in the temple fight against Lateef Crowder. They don’t even attempt to touch, let alone, one-up, the amazing long take fight up the stairs. I don’t know how they could’ve matched it, but you’d think they’d try. 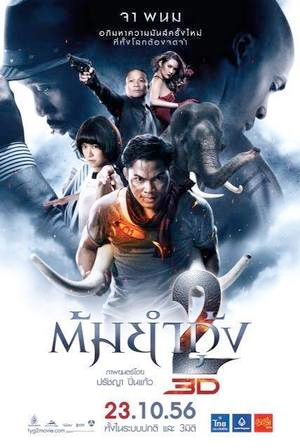 But stop frowning because I have now told you everything I disliked about TOM YUM GOONG 2, and all of these complaints fell quickly by the wayside as I got wrapped up in this solid, better-than-most-part-1s part 2. And the wayside was like “out of my way fucko, I’m trying to watch Tony Jaa.”

Jaa returns as Kham, the red-scarfed, hammer-kneed farm boy hero, who last time rescued his “baby brother,” the elephant Khon, from sinister exotic meat connoisseurs in Sydney. Now it’s five years later, Khon has grown, and some other rich asshole named Suchart thinks he can buy Khon. Kham may be back home in the booneys, but he’s not so naive anymore. He’s aware that he’s a badass, because he pretty much beat up the whole world in part 1. So when Suchart and his entourage come nosing around he keeps doing his work and doesn’t even look at them as he threatens, “You touch, I kick.”

There’s alot going on in this one. Our old friend Sergeant Mark of the Sydney police (Petchtai “Dirty Balls” Wongkamlao) is conveniently in Thailand to stop a terrorist plot against a ceremony that’s gonna create peace between warring fictional countries. Khon gets taken and when Kham goes to use his special set of skills on Suchart he finds him already dead and gets blamed for it. Most of all an arms dealer played by The Man With the Iron Fists himself, The Abbot Zig Zag Zig Allah Bobby Digital Steels RZArecta (FUNNY PEOPLE) has nefarious designs on both the elephant and Kham.

RZA’s character (L.C. according to the internet, but I thought I heard it “Alizé,” like the cognac) is much cooler than your usual English-speaking-villain-in-an-Asian-movie. Sometimes he wears a white suit almost like Michael Jackson in the “Smooth Criminal” video. When he doesn’t he still has spotless white shoes to contrast with Kham’s trademark dirty, worn out ones.

He chews on a diamond-encrusted toothpick and has a passion for collecting the world’s greatest fighters and branding them with numbers to represent their rankings. Kinda nerdy if you think about it, being so obsessed with stats. Also kinda short-sighted in my opinion, because you’d think the rankings would change sometimes when fighters lose or die. But the specific rules are not explained.

He has alot of fighters. His girlfriend is Twenty (Yayaying Rhatha Phongam), and that’s considered high up. So of course everybody gets jealous when RZA drags Kham in and marks him 01.

But that’s not all Kham has to deal with. Interpol (always a handy device in modern martial arts stories) is looking for him for that murder he got set up for. Worse, he’s being pursued by the deceased’s ass-kicking, identically dressed twin nieces – “pixie girls” according to Sarge. They spend the movie chasing down and attacking whoever they think might’ve done it, starting with Kham. They’re like adorable little Terminators. It took me a minute to figure out that one of them was the great JeeJa Yanin of CHOCOLATE and RAGING PHOENIX fame. She gets to fight against and also with her hero Tony Jaa. She doesn’t talk much and I don’t think she bothers with a formal agreement to team up with him, she just attacks the same guy he’s attacking. She gets the shit beat out of her a whole bunch of times and keeps getting back up.

Despite my grumbles at the top, not all of the stunts here are fake, and the ones that are admittedly add a little something to the building excitement. The aforementioned rooftop motorcycle fight is just the beginning of an epic chase sequence that includes getting chased by a swarm of what must be more than 100 motorcycles, most of them ridden by guys in skeleton masks. There’s no horn sounded like when the extreme sports kids are signaled to come after him in part 1, but I imagine this is some sort of a sister organization with a larger membership.

Anyway the chase is on and off wheels, it involves jumping off a bridge with a wire and swinging down and up the other side, a great POV shot of Jaa (or a double) jumping from one building to another and climbing up the side, many different uses for wires, ropes, clotheslines, spinning wheels and corrugated metal roofs. Great stuff. But to me the fights are still the best part.

As great as Jaa and JeeJa always are, the movie is nearly stolen by RZA’s #2, 02, played by Marrese Crump. This guy has a sinister presence and an arrogant fighting style with X-Men type super strength, and it’s pitted against Kham’s signature elephant style. 02 has I think four long fights against Kham, with Crump vs. Jaa II being a highlight because it’s got a RZA voiceover talking about Kham being “fierce as a lion, strong as a elephant.” I love that in MAN WITH THE IRON FISTS, GI JOE: RETALIATION and now this, RZA gets to do his version of old school kung fu dialogue.

I didn’t realize Crump was this good, but I’d seen him once before in WRONG SIDE OF TOWN, written and directed by my former nemesis David DeFalco. That was the movie that introduced me to Dave Bautista in his first major movie role, three years before THE MAN WITH THE IRON FISTS and RIDDICK, four years before he was a Guardian of the Galaxy. It’s also Crump’s only movie credit before THE PROTECTOR 2, unless you count a 2007 G.I. Joe fan film. So my hat is sincerely off to Demon Dave, he obviously has one of those Good Eyes For Talent you hear about, and he gave these two a boost up the ladder.

I know this is a good martial arts movie because a murder mystery is solved by knowing who teaches a certain move. I know it’s a good Tony Jaa movie because he sees his neighbor get shot in the head execution style and then he gets way more upset when he sees his elephant chained up. And also because he runs up a giant rolling turbine engine and then jumps off and does a flying elbow drop and almost breaks a guy in half.

I’m sure people will fixate on the misjudged use of the devil computers, but in my opinion as well as in scientific fact it would be a shame to let that mistake stop you from enjoying such a fun movie. It lacks the filmatistic messiness of the ONG BAK sequels, making it something of a return to form (and civilization) for Jaa. And flawed or not you gotta respect a movie so full of great fights, ridiculous mayhem, colorful villains with crazy schemes, and of course the beautiful story of an incredible fighter who will leave no ass unkicked in his quest to save his little brother, who happens to be a big elephant. It’s no TOM YUM GOONG, but then what is?

elephant JeeJa Yanin Marrese Crump Prachya Pinkaew RZA Tony Jaa
This entry was posted on Monday, March 31st, 2014 at 12:07 pm and is filed under Action, Martial Arts, Reviews. You can follow any responses to this entry through the RSS 2.0 feed. You can skip to the end and leave a response. Pinging is currently not allowed.