TALES FROM THE CRYPT PRESENTS: DEMON KNIGHT is another enjoyable studio B-movie of the ’90s that held up better than I thought it would. Directed by Ernest Dickerson (cinematographer of DO THE RIGHT THING, director of BONES, and that about sums him up) it’s a pulpy supernatural hotel-siege tale with a game Billy Zane as the (SPOILER) demon that the knight fights with. I know a couple people who say they can’t stand Billy Zane. I assume it’s because of the one-dimensional character he played in TITANIC, but I wish I could convince them to forgive him for that. I respect him for how perfect he is in THE PHANTOM, but I can’t sell everybody on that one. DEMON KNIGHT, on the other hand, is a performance you can’t really front on. He gets to play a redneck WALKER, TEXAS RANGER type, then an over-the-top smartass evil guy, and since he’s a Lucifer silver-tongued type individual he also does this seducer routine, trying to smolder like he’s painted on the front of a romance novel, half-whispering sweet nothings and lies straight into the ladies’ brains, his lips not even moving. He has some good lines, but the part that made me laugh most is not necessarily funny on paper or computer screen. It’s just the sing-songy way he calls out “hell-oooo-oooo.” Kind of a Ned Flandersy thing you wouldn’t expect a demon from hell to say while trying to kill a warrior with a powerful cask of Jesus blood.

Anyway, he’s real good in this, and it’s too bad that even though he’s done good roles in SNIPER, DEAD CALM, THE PHANTOM and DEMON KNIGHT he probly only has people coming up to him on the street saying “Mark my words, this Picasso won’t amount to anything! TITANIC!” It’s gotta be annoying for him and Arnold Vosloo to have to put up with that all the time. 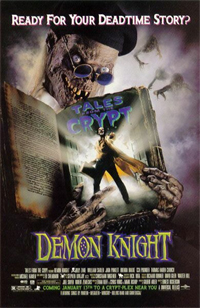 The movie starts with a car chase, William Sadler hauling ass from Zane. Both survive a fiery crash, Sadler fails at stealing a backup vehicle, so he hides out in a hotel that used to be a church. At first you don’t know for sure which is the bad guy, and there’s an all time classic reveal when Zane gets tired of pretending (let’s just say Bruce Lee’s punches are not as powerful as this guy’s.) (Okay, I’ll say more: he punches all the way through the sheriff’s head and then tears the whole thing off.)

When the demon is unable to get “the key” that Sadler carries (which can be used to put magic demon-repelling force fields on doors, windows and holes), he has a weird form of “okay, I was hoping it wouldn’t come this, but…” He stands outside, cuts himself, drips neon green blood on the ground and watches it slowly grow into his slimey, ghoulish minions. When they’re toddler-sized he lovingly kisses one on the head. Then the monsters try to get into the hotel and bite everybody, turning them into monsters too. The only way to kill them is to destroy their eyes, because it releases their tormented souls. So don’t be feeling sorry for these monsters. Poking their eyes out is the nicest thing you can do to them. They’ll probly send you a nice thank you card later.

So that’s how the game plays out. Monsters attack, Zane makes people hallucinate to convince them to give him his way. For example the local drunk Uncle Willy (Dick Miller) suddenly finds himself mobbed by topless babes while Zane, in his best beach wear, mixes drinks behind the bar. Meanwhile the demon knight tries to block off entrances, shoot evil eyeballs and rally the people to his team. The cast includes CCH Pounder, Thomas Haden Church, Roger Rabbit, and Jada Pinkett as a fairly tough ex-con with a badass juxtapositional love for her cat. Actually, CCH Pounder is tougher, she loses an arm and still manages to suicide bomb a bunch of monsters.

There’s a couple weird touches with the characters that kind of mess with what you expect in this sort of movie. Thomas Haden Church plays a real asshole, and he hits a woman. But then for a little bit it seems like you’re supposed to be okay with him when he hears the demon knight’s story (including a flashback to the crucifixion) and admits he respects him for having “balls.” Also, Charles Fleischer seems like he’s supposed to be sympathetic because he’s this timid guy in love with the hooker-with-a-heart-of-gold and wanting to protect her from the asshole, but later in the movie after he’s dead they find out he was planning a massacre at the post office he got fired from. That sort of changes your opinion on him. But provides much needed weaponry.

The script is by Ethan Reiff & Cyrus Voris, who wrote (with John Sayles) that really good Dolph Lundgren movie MEN OF WAR. Also they wrote KUNG FU PANDA. Also a guy named Mark Bishop is credited, he didn’t write either of those.

This was kind of a weird idea to make a horror franchise by doing unrelated movies hosted by this wiseacre corpse puppet, the Crypt Keeper (taken from an HBO anthology show, taken from a comic book). He appears at the beginning and end supposedly directing the movie and making all kinds of terrible puns in his grating voice. After the credits he promises another installment called DEAD EASY (it ended up being called BORDELLO OF BLOOD).

It’s hard to imagine a really great horror movie being released that way. I mean, what if the Crypt Keeper was at the beginning and ending of THE SHINING? I think that might not work as well. His presence would not be welcome, in my opinion.

But for this type of thing it works. It’s got a distinctive tone – not a comedy at all, but full of funny dialogue and joyfully gooey mayhem. And it has alot of imaginative pre-affordable-CGI monster puppets and what not. If his directing career had lasted longer I’m sure the Crypt Keeper would’ve grown as an artist but also his name would guarantee more of that type of DEMON KNIGHT feel. It would be a name brand where they wouldn’t have to sell you on what it was about or anything, you’d just say “oh, it’s a new tale from the crypt.”

Billy Zane CCH Pounder Charles Fleischer Dick Miller Ernest Dickerson Jada Pinkett Smith Thomas Haden Church William Sadler
This entry was posted on Monday, October 11th, 2010 at 1:35 am and is filed under Horror, Reviews. You can follow any responses to this entry through the RSS 2.0 feed. You can skip to the end and leave a response. Pinging is currently not allowed.