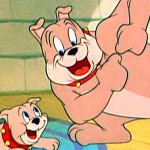 Actually come to think of it this is not a typical martial arts movie at all, it’s pretty fuckin weird and that’s what I liked about it. Despite HERO I’m still pretty skeptical of new Jet Li movies, especially when he’s speaking the english type language. This is a good not great movie, but it’s a great move for Mr. Li because he plays a distinct character, he really gets to act, he fights in a different style and he even gets to put a sincere anti-violence message in there. 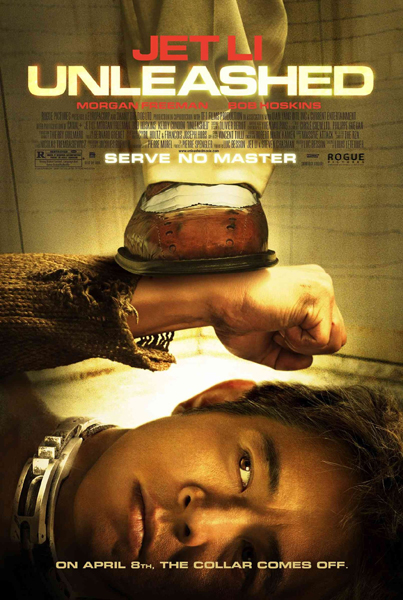 Like I said the title is DANNY THE DOG in Europe. That sounds better, but they thought people here would think it was like SOCCER DOG or something. Which come to think of it is not that far off. In those movies they got a dog who plays some sport like volleyball or football or whatever. Ain’t no rule says a dog can’t play basketball. Here, he’s a dog who does ultimate fighting. Only the gimmick is, he’s a dude. But also a dog. Anyway I’m getting off track here, the point is I don’t like the title UNLEASHED because in the movie, he never once has a leash. He’s uncollared but not unleashed. It’s just not accurate. At least it’s better than SAVED BY THE MUSIC which seriously is the title that Jet Li says him and Luc Besson wanted.

The director is some dude who did THE TRANSPORTER which is not a good movie at all. There was one part where some guys were fighting on the ground sliding around in a bunch of spilled oil, that was pretty cool. Otherwise though it’s that forced kind of “cool hitman” bullshit where a guy is supposed to be a good character because he wears a black and white outfit and never shuts his god damn yap about hitman professionalism. Come to think of it I hated that fuckin movie.

The script here is by that frenchman Luc “50/50” Besson who I have just now nicknamed after the probability of one of his movies being a hit or a miss. I gotta give him credit for writing a story much more interesting than that Transporter bullshit, even if it’s more ridiculous. As for the director, the filmatism is decent. At first I was worried because there was alot of that disorienting handheld and closeup and quick cut type garbage. The style that used to be for a scene where the main character is really drunk or high, now it’s used for a whole movie because of legends in some cultures that it looks cool. But a little bit in I was relieved to realize this type of shooting actually had a purpose, showing the confusion of Jet Li’s character Danny. When we first meet him he’s so out of it he gets a big bloody cut on his head and doesn’t know to plug it up. They give him some bandage and he uses it to fix his broken punching bag. As he begins to understand the world more the camera calms down and starts acting like a responsible adult camera like they got in good movies instead of some spastic retard camera like they got in the Michael Bay movies.

Man I really gotta lay off the retards in my reviews, I know, but here it’s actually relevant because Jet is playing sort of a retard. Unfortunately he’s not gonna get an oscar because the whole point is that he’s a retard who’s a genius at fighting, but he tries to stop fighting. You get an oscar for playing a retard who proves he’s a genius at something, but not for playing a retard who wants to stop being such a genius. For example if the good will hunting movie or beautiful mind was about how the guy decides that math is for suckers, they would not have got those oscars.

Really what this is is Jet Li’s EDWARD SCISSORHANDS meets WHITE DOG. What happens when a fighting dog in a human body comes to live at your house? And will he kill anybody? He doesn’t talk much, doesn’t understand much, is very timid and awkward but trying to fit in. And a real sweetheart. But capable of killing a fucker with two punches to the face. But that’s just the way he was raised. I love the way he wobbles into a fight with his shoulders hunched and his head down. He gets shy at the grocery store and hides behind Morgan Freeman like a little kid. The fight choreographing is by Yuen Woo Ping but it’s not the elegant CROUCHING TIGER style. He fights like an animal, yelling constantly, just jumping on a guy and PUNCHPUNCHPUNCHPUNCHPUNCH until the jaw is in seven and a half pieces. He even bites.

Danny’s relationship with the stepdaughter kind of threw me off at first. It’s pretty much a sister-brother relationship but you don’t know that at first. And for a minute I thought they had an older actress wearing braces and talking in a squeaky voice to seem younger. Like maybe they were gonna skip forward ten years. Then I realized I figured her age wrong, and I wasn’t sure what to think. He’s too old for her physically but too young for her mentally. Does that balance things out? I know Besson is a perv but I don’t know which one is the Jean Reno in this situation and which one is the Natalie Portman. In other words I don’t know which is the Luc Besson and which is the Milla Jovovich.

You know what I hate is when american Writers are talking about british people in movies so they refer to them as “blokes.” Or they start using british terms like “shite” or “bollocks.” Come on asshole, just a minute ago you were american, all the sudden you’re talking about Bob Hoskins I’m suppose to believe you’re wearing a kilt or something. I solemnly swear to never pull that kind of bullshit on you my dear readers and friends. Anyway, Bob Hoskins is a pretty decent villain. A little bit over the top. To be honest I usually think of him as the dude from Roger Rabbit so it’s hard to think of him as a nasty fucker like this. I guess he melted Christopher Lloyd pretty bad in that one so it’s true, you don’t want to fuck with Bob Hoskins.

This is a movie with more class than a CRADLE 2 THE GRAVE or something like that. But one thing that’s a little on the cheesy side is some of the guys Danny fights. There are some real Rumble in the Bronxers in here. I never been to england which I think is where this takes place but I bet they don’t really have a bunch of punk rock martial artists there. That’s my guess but maybe I better ask some of the “blokes” to verify that.

The main weakness of the movie is that after such a great premise there is really only one direction to go, or at least they choose to go in the obvious direction. I was real involved in the beginning but the ending kind of felt more like the solution to a math problem than a thrilling conclusion to an involving story.

Still, I thought it was a good one, mainly for the great performance and fighting by Jet Li. If he’s gonna keep doing english language movies he might want to stick with the french.

A NOTE TO RZA: I don’t want to be an asshole or anything but I just want to be sure you know you can’t coast on your Outlaw Award forever. I mean you did a pretty good job on the two songs you did for the end credits, but does that mean you should get your name in giant letters on the poster and at the very beginning of the movie? BLADE PART 3 had pretty good music too but I had a feeling it was more that orchestra guy than it was you. And KILL BILL had a perfect score but wasn’t it just a bunch of clips from other movies and not an actual composition by you? I mean you know me Rizza, I wouldn’t give a shit except that GHOST DOG IS THE BEST GOD DAMN SCORE OF THE PAST TEN YEARS. Nobody else ever did a score like that. You need to quit teasing us and give us another full on Rizza powered score. thanks for not taking this the wrong way rza. Power and equality bud.

Bob Hoskins Jet Li Louis Leterrier Luc Besson Morgan Freeman Pierre Morel Scott Adkins Yuen Woo-Ping
This entry was posted on Friday, May 13th, 2005 at 7:26 am and is filed under Action, Crime, Drama, Reviews, Romance, Thriller. You can follow any responses to this entry through the RSS 2.0 feed. You can skip to the end and leave a response. Pinging is currently not allowed.

One Response to “Unleashed”