A few years later Nick is off the force and working as a private detective with his ladies man partner Charlie Benz (Casper Van Dien, BEASTMASTER III, STARSHIP TROOPERS, TARZAN AND THE LOST CITY, MASK OF THE NINJA). And those assholes come back into his life again when the widow Mrs. Wells (Tia Carrere, SHOWDOWN IN LITTLE TOKYO, HARLEY DAVIDSON AND THE MARLBORO MAN, KULL THE CONQUEROR) hires them to find the men who stabbed her husband (Dacascos, ANGEL TOWN, AMERICAN SAMURAI, ONLY THE STRONG, CRYING FREEMAN, CRADLE 2 THE GRAVE) to death in broad daylight. 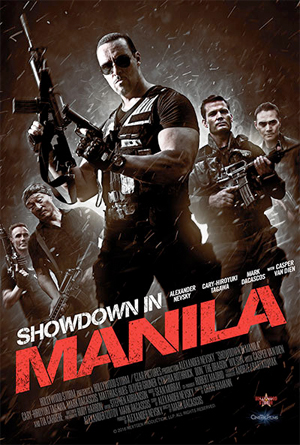 Dacascos is only in that one scene, but he gave himself something to do. While lounging with his wife he spots C-HT and Hues’s characters Cole and Dorn hanging out on the other side of the beach resort. The backstory is never explained, but he has sort of a “Holy shit, that’s bin Laden!” type of reaction and immediately gets up to run and attack them, fighting a bunch of their henchmen and giving chase before his defeat and an emotional acting scene saying goodbye as he dies in his wife’s arms. Quite a director cameo.

Mrs. Wells is a police sketch artist, so she brings Nick and Charlie a drawing of Cole. (I hope somebody who worked on the movie has that drawing framed and hanging on their wall.) They have detectiving montages going around showing the picture to people (Charlie usually ends up flirting with the women they talk to) and there is something about him being a mysterious Keyser Soze figure known as The Wraith. Eventually they figure out he has some kind of base out in the jungle so Nick calls some of his friends to help attack it.

The movie suddenly gets alot more exciting when up floats a raft of veteran mercenary badasses: Dillon (Don “The Dragon Wilson, BLOODFIST, BLACKBELT, THE MARTIAL ARTS KID), Haines (Cynthia Rothrock, ABOVE THE LAW (the Hong Kong one), NO RETREAT NO SURRENDER 2, CHINA O’BRIEN 1 and 2, MARTIAL LAW I and II, LADY DRAGON 1 and 2), Ford (Olivier Gruner, ANGEL TOWN, SAVATE, SECTOR 4: EXTRACTION) and Victor (Dmitriy Dyuzhev, who needs no introduction.)

(Just kidding. He’s a younger guy who’s done alot of Russian TV. Seems completely out of place on the raft to me, but maybe he’s well known over there.)

On a meta level it’s kinda nonsensical, because Nevsky is 10-20 years younger than the others, and didn’t start making movies until the 2000s, but he gets to be the old friend who went through the shit with them and is happy to see them after all these years. Not fair to Van Dien, who has to be the newbie who’s left out of their in-jokes. But they get some mileage out of the old friendship – they each greet him and later say their goodbyes and hug and stuff. I liked that. Friendship is good.

Though none get to fully develop a character, they handle themselves well. Gruner has a stronger presence than in that movie that somebody got mad at me for not liking, Wilson has a war-weathered appearance that works really well for him now, and I especially loved seeing Rothrock. They’re all wearing camo but she has her hair dyed bright purple, and I choose to take it as an important character trait. Haines is gonna be Haines even if it puts her in danger. She self-identifies as the fastest runner of the crew and volunteers for a dangerous task that she says will require serious cover and benefit from a distraction by Dillon. And Dillon actually takes off his camouflaged hat, but she doesn’t put it on! She’s hiding and bad guys are shooting at her and there’s this purple head poking up like an exotic bird calling attention to itself. Doesn’t matter! This is Haines we’re talking about. She can handle herself.

There’s not a great chemistry between Nevsky and Van Dien, but I get the idea enough to like the pairing. Charlie is too charming for his own good and Nick is a gentle giant. Like Face and B.A. I like Nevsky’s insistence on not playing Russian bad guys, and having sweet relationships with a wife/girlfriend and a former informant who he makes into an assistant, but maybe they need to be more opposites to work as a buddy movie. In some ways it feels like a pilot for a syndicated detective show where these two would start to get a better rapport after a few more episodes.

Van Dien did get a couple of genuine laughs out of me, one of them from being attracted to and yet intimidated by Ms. Haines. The obvious way to play it would be the cocky asshole who hits on her and gets put in his place, but Van Dien plays it sheepish, like a quiet school boy getting up the nerve to pass a note to his crush.

I was most impressed by the morally ambivalent way it all plays out. They SPOILER get their guys, bring them to Mrs. Wells, and she just straight up murders them. It’s neither played like sweet revenge or a dark moment of going too far – just an ugly reality of their job. Charlie seems a little queasy, but their cop contact is gonna let it go and they make arrangements to dispose of the bodies. Then they sit on a dock and contemplatively smoke some Cuban cigars stolen off a dead body. Life is weird and fucked up and maybe they’re a little uneasy with it, but this is what they do, and at least they have each others’ company. It reminds me of that great opening to TO LIVE AND DIE IN L.A., when the agents sit on the roof and talk after having seen a suicide bomber explode. A little taste of Friedkin at the end of a movie closer to the level of Chuck Norris.

The screenplay is credited to Craig Hamann, story by Hamann, Nevsky and Dacascos. Hamann was an actor who appeared in Fred Olen Ray’s THE TOMB (1986) and befriended Quentin Tarantino in an acting class. He co-wrote and starred in MY BEST FRIEND’S BIRTHDAY, Tarantino’s unfinished first attempt at a feature that sort of evolved into TRUE ROMANCE. He also is a radio voice in RESERVOIR DOGS and, being a former addict, was a consultant for the heroin scenes in PULP FICTION. His other writing credits are DOLLMAN VS. DEMONIC TOYS, STALKED, and BOOGIE BOY, which is his connection to Dacascos.

By the way, I sometimes lament the scarcity of bombastic credits sequences in modern action. Not enough titles made of steel and fire slamming or exploding on screen. Especially in the modern VOD/DTV world you don’t even know if they’re gonna pick a professional looking font. So I have to tip my hat to SHOWDOWN’s opening credits, which use that gimmick I think I first saw in PANIC ROOM, where the names are three dimensional letters hovering above a city at different angles parallel to the skyscrapers. But then when the title comes on it slams into the side of a building that Nick is about to raid and cracks the wall. Good stuff.

All of the action vets here have made much better movies than this, with stronger characters and stories and more involved action. But they’ve also made worse. This is far from the state of the art for the genre right now, but it’s an okay low expectation nostalgia watch for fans like myself.

Alexander Nevsky Andrzej Bartkowiak Cary-Hiroyuki Tagawa Casper Van Dien Craig Hamman Cynthia Rothrock Dmitriy Dyuzhev Don "The Dragon" Wilson Mark Dacascos Matthias Hues Olivier Gruner Tia Carrere
This entry was posted on Thursday, January 25th, 2018 at 12:21 pm and is filed under Action, Reviews. You can follow any responses to this entry through the RSS 2.0 feed. You can skip to the end and leave a response. Pinging is currently not allowed.

11 Responses to “Showdown in Manila”