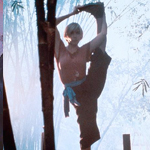 Director/story-provider David Worth (this was his followup to KICKBOXER) gives her lots of cool entrances like that and different outfits, sometimes masculine (a black leisure suit), sometimes the opposite (lots of glittery dresses). She’s trying to track the white arms dealer in Indonesia who killed her CIA agent husband. We learn all this only after special guest star Robert Ginty (THE EXTERMINATOR), who was watching her fight from behind shades and a cigarette, finds her at a bar and tries to bring her back into “the Company.” She says no and tells him to “have a nice day.” He says “Yeah, you too.”

Then she sits staring at her drink and flashes back to how it all began. It’s one of those dreamy, sun-drenched slo-mo sequences that signify nostalgia for young love. The couple is laughing together, rolling around in a park, then they’re at the wedding, coming down the stairs, their family all celebrating and throwing rose petals. Suddenly a dude walks right up and shoots the groom in the chest. Not a new scene. He’s just walking out the door from his wedding and they’re blowing him away right there. That’s some cold-hearted shit. I can see why she took it so personally. 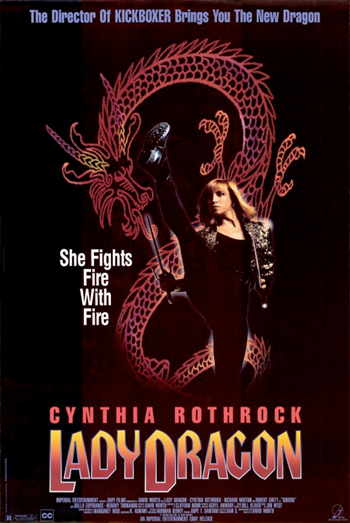 She goes undercover by putting on a black wig and skin-darkening makeup. I’m not 100% sure if she’s supposed to be pretending to be Asian or not. Anyway she heads to the Super Star Discoteque on mudwrestling night. The bouncer Andre (Gino Makasutji) lets her in because he won money on her fight and she promises not to cause trouble this time. But she does. She storms right through the dance floor, dismissing such great pickup lines as “Hey, how much for your body baby, I’m gonna buy your body” and “Hey baby, you’re mine!” and starts beating up all the security guys, who are completely shocked by her skills. As in all Rothrock’s movies, she’s the master of the grabbed-from-behind-kicks-over-her-shoulder-hits-the-guy’s-head, among other kicks. One of the thugs she throws into the mud pit and he gets jumped on by the girls, like they’re wild animals who don’t know any better.

But she’s dealing with organized crime, they have guns and endless manpower, so she’s under control by the time she peels back the layer of henchmen to find her prey, Ludwig Hauptman (Richard Norton, in one of his 13 movies with Rothrock). He doesn’t recognize her from the husband-killing days, and also he rapes her. Thankfully it’s not a graphic scene, but I still found it completely gratuitous. She already has the murder of her husband to avenge, there’s no reason to put her and us through this.

Anyway, they beat the shit out of her and dump her on the side of a dirt road in the middle of nowhere. This is the defeat that she must rise from like the phoenix or the Mason Storm of myths and legends.

That’s when a little boy and an old man (Piet Burnama, also in Sam Firstenberg’s BLOOD WARRIORS) find her. The next shot is their ramshackle house which has a little cage in front for chickens, so for a second I thought “Oh shit! Out of the frying pan and into the fire.” Some backwards country folk playing finders-keepers with the half dead lady they found. That’s not what happens, though, so I’m gonna file that away for one of my future fictional works.

In fact they are good samaritans. The old man is mute, with the boy as his translator. He is also wise and maybe prophetic in some way, prompting the boy to say of Kathy’s wig and makeup, “Why is she dark and light at the same time? Oooohh, good and evil fight inside her.”

They give her disgusting natural remedies and then start teaching her new martial arts skills. Like KICKBOXER there are some excellent training montages with coconuts hanging from ropes and bamboo structures for her to balance on. She becomes an even better fighter and is declared a Dragon. (They do not include the gender-specifying prefix.)

There’s an odd little tangent where the boy goes off on a solo adventure in the city and talks to some sleazebag. It actually seems like he’s snitching on Kathy for money. But then he steals something from an office, gets caught and chased onto a roof by a gunman. He kicks the guy off the roof, killing him. When he goes back to their shack Kathy sees that something’s up and asks “Is everything okay? What’s the matter?”

“Oh, honey,” she says with great sympathy. “I’m so sorry.” They hug. She smiles. All better. The alleged child molester who fell off the roof incident is never mentioned again. And the best part is I’m pretty sure that the slandered dead guy was her bouncer friend Andre.

Oh well. You know how kids are, and their mischief.

When Kathy is rehabilitated and improved she says her tearful goodbyes to her new family and goes into the city to continue her quest for vengeance, going undercover as a secretary, friend and roommate to Susan (Bella Esperance), a lady who works for and sleeps with Hauptman but also is nice enough to feel sorry for some random white lady she meets and go out of her way to help her out. Unlike a male action hero, who usually limits support crew to no more than one mentor, one partner and one girlfriend, Kathy racks up the old mentor, the little boy, a gambling associate and a cop. Because women are willing to ask for directions.

When she comes face to face with Hauptman pretending to be an employee he sees her as a potential love interest. He doesn’t recognize her, even though he had her husband killed years ago and recently raped her. So seriously, fuck this guy.

This is not on the level of KICKBOXER, but it definitely has some similar qualities, including enjoyable training montages and the rare Inspiration Rock song by a female singer, Susan Gutteres’s “Courage To Fight”…

…although that should be over the training montage, not just the end credits. Still, it’s a more-enjoyable-than-most stupid martial arts movie of the era. There’s some car and motorcycle action and alot of fighting, including a long and pretty well done climactic one-on-one Rothrock vs. Norton match. Actually this is probly the best of the American Rothrock vehicles I’ve seen so far, but I’ve got a bunch more to go (including the often-recommended-to-me UNDEFEATABLE).

This trailer gives you a good idea of what you’re in for:

Cynthia Rothrock David Worth Indonesia Richard Norton Robert Ginty
This entry was posted on Tuesday, March 3rd, 2015 at 12:23 pm and is filed under Action, Martial Arts, Reviews. You can follow any responses to this entry through the RSS 2.0 feed. You can skip to the end and leave a response. Pinging is currently not allowed.