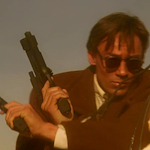 It starts in Los Angeles, 2027 A.D., which does not look overly futuristic, but is covered in an eerie orangy brown haze. Alex Rain (Gruner, who had only been in ANGEL TOWN) is in a hotel for a liaison with a woman, but then he shoots her in the head, revealing a bunch of wires and electrodes. “God damn cop,” she says. “God damn terrorist” he replies. Though he very poorly delivers a one-liner to her exploded head, he looks very cool when he walks out of the hotel with a Chow Yun Fat style tie-overcoat-and-sunglasses look, passing a bunch of people in the hallway who take a minute to figure out he’s the cop who shot their friend. But then they follow him. END_OF_DOCUMENT_TOKEN_TO_BE_REPLACED

END_OF_DOCUMENT_TOKEN_TO_BE_REPLACED 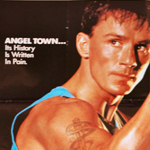 “Jacques, as long as I’ve known you you’ve been in deep shit. I expect this.”

Even though I have this weird feeling that French kickboxing champion turned VHS-era action icon Olivier Gruner doesn’t like me, I’m open to watching his movies. I actually didn’t realize while watching it that ANGEL TOWN was his debut, but it makes sense. This is his L.A. gang movie, which came out after COLORS but before BOYZ N THE HOOD or MENACE II SOCIETY (or New York movies like NEW JACK CITY and JUICE). And I’m not saying it’s as good as any of those, but it’s a fun b-action take on the subject, and it makes a decent argument for why Gruner should be in movies.

He plays Jacques, a Frenchman renting a room in a gang neighborhood while attending graduate school in East L.A. He ends up there because he gets into town late and all the student housing is filled up, but also we learn he was born in a French ghetto and lived in one in Hong Kong too. It’s not relevant, but I want to mention why he’s late to school: when he was about to leave he went to visit his father’s grave and then his girlfriend showed up distraught that he was leaving and she took off her fur coat and she was naked so he fucked her right there on his father’s grave. And that must’ve taken a couple days, I don’t know. END_OF_DOCUMENT_TOKEN_TO_BE_REPLACED 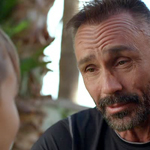 Ah shit, now I looked it up and this is his third movie as a director. So it’s not even a milestone or anything. Why did I watch the whole thing?
END_OF_DOCUMENT_TOKEN_TO_BE_REPLACED

In the grand spaghetti tradition, Charlegrand is a mysterious stranger wandering through the desert on his horse. Some cowboy assholes knock him off his horse and he drops his gun, so he busts out the kickboxing. They know all about punching, of course, but this shit blows their minds. It’s like he came down from space. END_OF_DOCUMENT_TOKEN_TO_BE_REPLACED