ABOVE THE LAW (1986) (a.k.a. RIGHTING WRONGS) really is about the law. It begins with Yuen Biao after graduating from law school. A group of conspirators, including one with a gun tucked behind an accordion, try to assassinate his professor. The shit goes down just as he’s saying his goodbyes and the prof is giving him a law book as a gift. In the chaos the book goes flying in the air, is shot through with holes, and then is stepped on by panicking witnesses. I don’t know why but I almost feel like that could symbolize something. Probly not.

Since the book is wounded he doesn’t have to handle this by the book, and he gets involved in an awesome car chase with the assassin and then shoots the guy’s car and makes it explode into flames. Thus begins the career of a lawyer vigilante. In the court room he prosecutes criminals, in his spare time he sneaks around and kills the people the law can’t touch. One might argue that he believes he is above the law. In his defense the Steven Seagal movie of the same title didn’t exist yet so he didn’t know that nobody is above the law.

One person that did already know that is the white lady police inspector played by Cynthia Rothrock. And man am I glad I saw this because I had no idea how little justice those CHINA O’BRIEN movies do to her talents. Yeah, I mean you could tell she could fight but in this movie she moves faster, she does way more, her kicks look more powerful. In her first scene she arrests 4 men by tangling them all together using one pair of handcuffs and a chair. She seems way tougher, like a whole different person. It probly doesn’t hurt that she’s dubbed with a deeper voice than her real one, like Jet Li used to be.

She also gets to fight a fellow female martial artist in a long fight involving a chase, high jumps, and a chain. It happens in a mall, but I won’t consider that a sexist stereotype about shopping, since many great non-gender-specific movie scenes have happened in malls, from DAWN OF THE DEAD to POLICE STORY.

The fights and stunts in this movie are all great, like Jackie Chan stunt team style choreography, but without all the jokes. For example there’s the scene where Biao is attacked in a parking lot. He jumps over a moving car, jumps over a parked car as another car jumps over it, ducks between two cars crashing headfirst into each other, then hangs beneath them as they continue to drive, does gymnastics from an overhead pipe, kicks through windshields, beats the guys up even though he’s outnumbered and they have a baseball bat. The only thing that could possibly improve this scene would be if he did it all while wearing his lawyer wig. 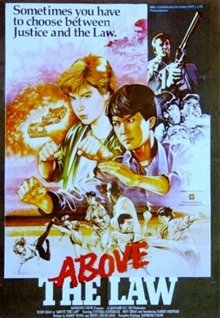 Biao and Rothrock meet up when she follows him to the mansion of a defendant he has on trial. He gets there right after somebody’s murdered him with an icepick, so Rothrock thinks he did it. Sure, he’s innocent, but in my opinion he shouldn’t get on his high horse about it becauseI believe he was there to murder the guy himself. He was framed for a crime he was about to commit. The good guy is doing the same thing as the bad guy but we’re supposed to root for the good guy. Oh well, at least we know Rothrock is clean.

Our two heroes end up having a furniture smashing, vase throwing brawl. He kicks the dead body on top of her and she double kicks it back off of herself. Just no respect for preserving the crime scene, you know?

As the story’s coming to a climax the two law-abovers battle it out in a small airplane hangar. It would be a shame if this didn’t lead to some airplane stunts, but having watched so many American action movies where they set up something great and then act like they had no idea that’s what you might expect I’m always kind of ready to be disappointed. No worries here. The guy tries to escape in a small plane and Yuen ends up finding a rope to hang off of. So we get stunts with real people hanging off a real plane and then a kung fu fight inside it. One rumor says that Sammo Hung directed this part. I don’t know but whoever did it if I wore a hat I would take it off and put my hand over my heart.

The tone of the movie is very fun, but it gets brutal at times. There are some unexpectedly vicious things that happen, including to the characters you like. The ending SPOILER is surprisingly grim. It seems it’s gonna stretch believability to have him survive a skydive without a chute by landing in water… but then no, not exactly. Whoops. Apparently there are alternate endings where he and Rothrock survive… but he goes to prison for what he’s done. So there’s different versions where you get kicked in the balls in different ways. It’s like that CLUE movie.

The director is Biao’s Peking Opera School chum Corey Yuen (NO RETREAT NO SURRENDER, FONG SAI YUK, MY FATHER IS A HERO, THE TRANSPORTER). Apparently Yuen Biao, Mang Hoi and Tsui Hark may have also directed some of the action. And Sammo Hung may have directed the climactic airplane fight. Well, they all did a good job then. Other than EASTERN CONDORS this is the best martial arts type action movie I’ve seen in a while.

thanks to @colonelmortimer for insisting I watch this

Corey Yuen Cynthia Rothrock Dragon Dynasty movies with the same title as a Seagal movie Yuen Biao
This entry was posted on Tuesday, July 24th, 2012 at 12:59 am and is filed under Action, Martial Arts, Reviews. You can follow any responses to this entry through the RSS 2.0 feed. You can skip to the end and leave a response. Pinging is currently not allowed.

8 Responses to “Above the Law (not the Seagal one)”