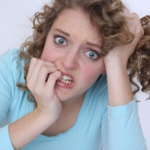 It’s a simple set up for a taut thriller type deal. Jodie Foster and young daughter buy new house, in house is reinforced concrete bunker with video cameras in case of home invasion, that night there is home invasion, Jodie and daughter are in panic room, but home invaders want in because money is in there. what will happen? nobody knows. Suspense!

So you got a limited location (only the opening scene is not inside the house) and a limited cast. And when done correctly, by a filmatist such as Mr. Fincher, that equals good times.

And the cast is real good. Jodie Foster lives up to her reputation as being a good actor. She gets primal and motherly but without ever turning into another Ripley clone. The three home invaders are an all star cast: 1. Jared Leto, who played the blonde dude in 1999 Outlaw Award Winner for Best Fuckin Picture FIGHT CLUB 2. Dwight Yoakam, the country singer who is actually a real good actor in such pictures as SLINGBLADE and NEWTON BOYS and 3. Ghost Dog. In this picture Ghost Dog is playing the Charles S. Dutton role, but he plays it perfectly. He is intimidating but likable. He has that lazy eye too. Who wants a dude with a lazy eye going through their shit anyway. Nobody.

Jared Leto is really racking em up now. He is real good even in pretentious movies like REQUIEM FOR A DREAM and crappy ones like HIGHWAY. Here they got him with cornrows and a beard and he plays the stupid rich kid. And when a stupid rich kid has cornrows and a beard it makes you hate him even more. Dwight Yoakam is great too, wearing a ski mask for half the movie so I didn’t even realize it was him. I guess maybe if he still had the mask on I might of recognized him, like if he had on a cowboy hat over the mask. Anyway no cowboy hat, but it’s definitely Dwight Yoakam in my opinion.

I think the Writing is a little weaker than usual in David Fincher pictures. There are lots of little modern references and what not, sometimes amusing but always in the tradition of your usual hollywood movie dialogue. This is because Andrew Kevin Walker was busy playing “Sleepy Neighbor” in the movie so they had to get David Koepp (who Wrote either Gosford Park or Jurassic Park I believe) to Write it. But it doesn’t really matter because the acting is good and the story is suspenseful and there are masterful scenes like the slow motion “running to get the cell phone” scene that had the audience I saw it with gasping.

There are some things that you can’t help but predict. As soon as you see that the little girl has an insulin kit, you know that a) she’s going to need an insulin shot but not be able to get it and 2) the syringe will later be used as a weapon. Fortunately the use as a weapon is not quite in the same way you expect. In many ways it is a formula hollywood thriller but there are many subtleties to make it feel like something better.

There is also a scene in the beginning where the little girl rides around the house on a scooter. I am 100% positive that in the original draft of the script, the scooter was later used in an action sequence, but that Mr. Fincher dropped it from the script. When something is going to be used later in this type of movie, they set it up. They do it with the panic room, with the elevator, with the cell phone, with the insulin. I fucking KNOW they did it with the scooter, and some day I will prove it to the world.

Visually it does not knock you on your ass the way his past movies have. He started with cinematographitist Darius Khondji who did STEALING BEAUTY, but then they got in a scrap or something and he got replaced with Conrad Hall who did AMERICAN BEAUTY. The guy who did BLACK BEAUTY was on standby. I read somewhere that Fincher wanted to shoot it all in real darkness, but that he realized later he didn’t want a movie about a bunch of black blobs moving subtely in front of a black background. There ended up being nothing radical about the look of the picture other than, it looks just right. The only thing real show offy is a handful of shots that use computery shit to go through floors and walls instead of the old three walled set technique from ROPE. This is more reminiscent of FIGHT CLUB and at one point is used to have a camera pan from Jodi Foster’s bedroom downstairs and through a keyhole. Not some fuckin see through skeleton keyhole like in the old movies, but an actual modern lock.

Also by the way if those aren’t the cleverest opening credits since SEVEN, then THE MAN WHO WASN’T THERE are. But still, pretty fuckin clever.

PANIC ROOM won’t stay with you the way FIGHT CLUB and THE GAME and even SEVEN do, but it is definitely worth seeing if you like movies that are suspenseful, good, etc. Way to go Jodie Foster thanks

David Fincher Dwight Yoakam Forest Whitaker Jared Leto Jodie Foster Kristen Stewart
This entry was posted on Friday, March 29th, 2002 at 7:38 pm and is filed under Reviews, Thriller. You can follow any responses to this entry through the RSS 2.0 feed. You can leave a response, or trackback from your own site.