It’s the 4th of July, and Sheriff O’Brien is receiving a plaque from the mayor for lowering the crime rate in Beaver Creek to one of the lowest in the state. Well, enjoy it while it lasts, mayor, because a couple at this very picnic are about to be tracked down by a team of ex-military drug smugglers who want their suitcase full of $5 million in cash.

You see, C.Z. Baskin (Harlow Marks – “Power Worker”, HALLOWEEN 4: THE RETURN OF MICHAEL MYERS) was a Special Forces guy during the Vietnam War. Matt (returning Richard Norton) even knew him. He caused alot of trouble as a drug smuggler but has just now escaped from prison and is out for revenge on the people who busted him. In fact, the first 10 minutes of the movie don’t even have China in them, they’re used for a series of gimmicky assassinations (a judge killed while a volunteer for a magic show, a detective killed by a birthday strip-o-gram who must get off on going through with the dance since she could’ve pulled the gun out right when she walked in the door).

Frank (Frank Magner) and Annie (Tricia Quai) are the couple who have gone into hiding in Beaver Creek. Frank was one of the drug smugglers, but he turned state’s evidence. Thugs track them down and gunfire erupts at the park where everybody’s watching the fireworks show. Of course this means China, Matt and Dakota (Keith Cooke is back too) do karate on a bunch of guys. My favorite beat is when one of the bad guys accidentally puts his hand on the hamburger grill. 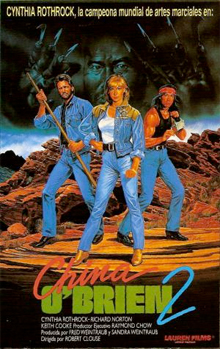 China’s Sheriff’s Department is pretty casual. It seems to consist of her, Matt, Dakota, one other officer and one dispatcher. Only the last two wear uniforms. There’s alot of denim involved, and China still wears acid wash. She doesn’t usually have a badge visible, but I noticed it in one scene, pinned to her jean jacket. After the shit goes down Matt asks China to carry a gun “at least for the next few days,” but she refuses to. (Flashback to shooting the kid in the alley in part 1.) Later she steals a guy’s gun and points it at him and it doesn’t seem to be a big deal.

The bad guys end up kidnapping Dakota and his girlfriend Jill (Tiffany Soter), who’s also Frank and Annie’s daughter. While a prisoner Dakota ends up having to duel one of the guys with his hands tied behind his back. He’s winning, even gets the guy in a headlock, until 3 other guys jump in.

As a sequel this is pretty lackluster. It came out 1 year later so everybody looks the same, nothing has changed much since part 1, the stakes don’t change. The biggest difference is that we learn from the mayor and his plaque that her name is actually Lori and China is a nickname. Which I’m against.

The movie is kinda boring until it just turns into a bunch of fighting at the end. The bad guys jam all the phones in town, so they can’t call for backup. Not like they would anyway.

China does alot of flips and somersaults. One guy comes at her with a gratuitous cartwheel and handspring, she just uses his momentum to toss him through a wall. During one fight there happens to be a rope tied to where they’re standing, she ties it around the guy’s leg and knocks him off the ledge to just hang there. Good move.

Some of the different villains get unexpectedly colorful. There’s a guy who wears two Freddy-esque claws. There’s a guy with a whip and Indiana Jones style hat. There’s a guy with zebra-print pants. Well, that last one was just ’cause it was 1991. One crazy unexplained thing that happens is some of the thugs are snooping around the back entrance to a building, looking for China and friends. One peeks his head into the door, says he doesn’t see anything, and angrily kicks over a crate of cabbages by the door. Suddenly two chefs jump out, slash the guys with cleavers and kick their asses. So there are some citizens of Beaver Creek willing to stand up, at least when their produce is threatened.

If they ever lower the crime rate again in Beaver Creek they should then try to find time to start cleaning up the alleys. There’s too much random shit laying around. There’s a washing machine. There’s a piano. Matt bodyslams a guy onto the piano, then tips it over on a different guy. Would’ve liked to see a head banged against the keys, but that’s okay.

Earlier in the movie China had a jokey fight with the town drunk. He went on a rampage destroying things and China seems to like him but he resists arrest, so she (and an obvious stunt double) jump around and dodge his punches and cause him to hurt himself. It’s kind of cool that at the end of the movie the same guy is in a holding cell. There’s a smoke bomb so Annie lets him out – I hope she knew who he was and was sure he wasn’t some murderer or something. This is a great set up for him to use his destructive powers to help China, but unfortunately all he does is ram through one door and then get shot to death.

To me the most exciting sequel moment is one little part where China uses a bow and arrow. Why is this great? Because in part 1 there was a photo of her with her dad holding that bow, but she never used it in the movie. World building!

One of China’s best moves is when Frank has her at gun point, trying to get her out of his way. He says, “Get in the closet. And don’t come near me, I know what you can do.” So she calmly steps into the closet, then swings the door out to bash him in the face and knock the gun out of his hand. You can’t trap China O’Brien in the closet.

I sort of like the anticlimactic end to this conflict. (END SPOILERS FOR THE MOVIE CHINA O’BRIEN II STARRING CYNTHIA ROTHROCK). Frank is dead, Baskin grabs the suitcase of money and runs away. Does China catch up to him and fight him to the death? Does his fellow ex-Special Forces warrior Matt face him down and pit one set of skills against the other in the ultimate test of survival? Or, you know, maybe some sort of fiery explosion gets him? No, grieving wife Annie, not really a fighter, crying and on her knees in the alley, busts off a couple shots and hits him in the back, killing him.

There’s an epilogue where the late Frank – a drug smuggler who only changed his ways because “it was him or me,” a guy who was kind of an asshole that China didn’t even like before he pointed a gun at her – receives a hero’s burial. They announce that the $5 million was generously donated to the hospital, and there will be a new wing and clinic in his name.

But wasn’t that drug money? You’d think there’d be some law against that. Huh.

4th of July Cynthia Rothrock Keith Cooke Richard Norton Robert Clouse
This entry was posted on Friday, May 18th, 2012 at 2:16 am and is filed under Action, Martial Arts, Reviews. You can follow any responses to this entry through the RSS 2.0 feed. You can skip to the end and leave a response. Pinging is currently not allowed.