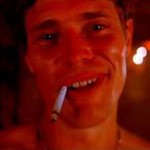 This movie has the thumbprints of great filmatism smeared all over it. It has the kind of opening I’m a sucker for, the kind that throws you in the middle of something, sets the tone, then goes into the opening credits. Like a preamble or an overture. The main character Richard Chance (William Petersen) is on security detail for a Reagan speech (you just hear Reagan’s voice off screen, they don’t have Martin Sheen or anybody playing him). The guys are just kind of killing time when he notices something odd that leads him to the roof, where he finds an Islamic suicide bomber. (oh, shit.) He’s not able to talk him down but his partner climbs up the side of the roof and yanks the guy by the leg so that he explodes in mid-air, like a big balloon full of blood and chunks of meat. Then the two sit on the edge of the building to think about what has just happened. Chance says, “Let’s go get drunk and play cards” and it cuts into a stylish opening montage showing various images from the movie and that represent L.A. 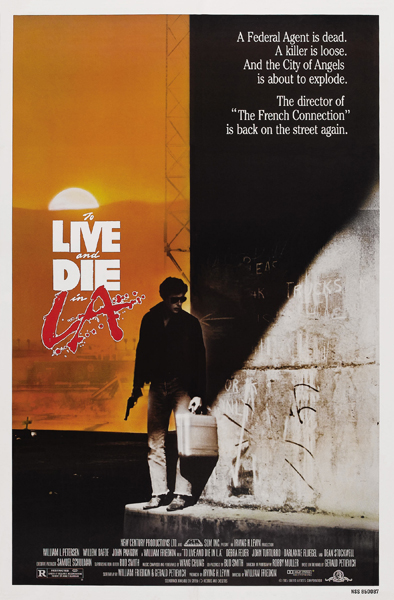 One sign of greatness: the title is printed in a font so big the title has to be split up to fit on the screen. This generally means the movie is gonna be awesome. I’m sure some shitty movies have figured that out and use big fonts to fake everybody out but as a general rule title filling entire screen = good movie.

More reasons it’s great: It has a compelling lead who you haven’t seen in many movies. (I kept wondering why I haven’t seen this guy in other stuff before I figured out he was the dude from CSI, only young and McConaghey-esque.) It has the confidence to abandon the plot to focus in on details, like the long montage illustrating step-by-step the process of counterfeiting bills. It has some knock-you-on-your-ass-and-then-help-you-half-way-up-but-then-say-‘psyche’-and-drop-you-back-on-your-ass-and-then-a-car-drives-by-and-splashes-a-puddle-on-you action setpieces. I think maybe the big car chase even tops director William Friedkin’s own THE FRENCH CONNECTION with its escalating mayhem, thrilling car POV shots and the way it’s both an exciting action scene and a major turning point for the characters. I didn’t know that the L.A. river basin was done before T2, or that wrong-way-on-the-freeway was done before RONIN.

And it’s unpredictable. You don’t necessarily know where it’s gonna go. Things don’t unfold exactly how they’re supposed to. For example, Willem Dafoe is this scary villain, but every time he gives somebody a beatdown he almost gets the tables turned on him first. He’s not untouchable. He gets his ass beat. The hero is vulnerable too, and flawed. But not a total fuckup. He’s heroic enough that you think he’s gonna learn a lesson and stop treating his girlfriend/informant so shitty. But let’s just say he might not. He has a dark side.

All of the actors are really good in this movie, most of them early in their careers, too. John Turturro for example had only played a few small roles before he stole the show here as a guy they nab with counterfeit money, and might get taken out before he can snitch. There’s also a good part for Steve James, the guy that played Michael Dudikoff’s sidekick Curtis “Before 50 Cent” Jackson in the AMERICAN NINJA movies.

On the DVD there’s a deleted scene that Friedkin says he doesn’t remember why he cut, and he wishes he could put it back in the movie but the only footage of it is a crappy video. The scene would’ve been near the end of the movie. Chance’s partner Vukovich (John Pankow) is about to go to the big climactic showdown. But first he goes to some apartment building. You’re not sure what he’s doing. He knocks on a door and a woman we’ve never seen in the movie comes out. It becomes apparent from the conversation that this is his wife, but they’re separated. And he tells her he wants to patch things up. But it’s late at night, he seems crazy, he knows she doesn’t want him there, so she tries to get him to leave, and they get into an argument.

It’s a great scene and it’s not in the movie, but it would’ve fit right in there. That’s the kind of movie we’re dealing with, a movie that does have an exciting, dangerous showdown, but first wants to take a little detour about a character’s life. What’s wrong with it, what he wants to fix about it. And at the same time it shows you just how scared he is because obviously he wouldn’t be doing this if he wasn’t thinking he could die.

Friedkin reminds me alot of Michael Mann. Both of them are these macho guys directing macho guy movies, making buddies with cops and criminals who they use as technical advisers, bragging about their adventures on their commentary tracks. On THIEF Michael Mann hired a real safecracker so he could show how a safe is really cracked, on this one Friedkin hired a real counterfeiter so he could show how money is really counterfeited. According to IMDb trivia, Mann even tried to sue Friedkin over this movie, claiming it was a ripoff of MIAMI VICE. (He lost, then he dranka mojito.)

But Friedkin is less pretentious and makes movies with a quicker pace. He’s more interested and skilled at putting thrills in his movies. And he seems slightly less full of himself. Very slightly. TO LIVE AND DIE IN L.A. was not a big hit but seeing it now I think it was very influential. I’ll be damned if little twentysomething Shane Black didn’t have this movie on the brain when he wrote the first LETHAL WEAPON. It even has the partner about to retire who says “I’m too old for this shit.” And it has a slick style that I think sort of mutated into the Tony Scott pre-midlife crisis style. Hell, maybe even the midlife crisis Tony Scott style, because every time they show a title on the screen it uses a different font. That’s the 1985 version of flying subtitles and attack of the Avid farts. But it’s kind of cool.

By the way, Friedkin found William Petersen in theater, but he had done one movie role before: he played a bartender in THIEF.

You know, people have been recommending this one to me for years, and there was at least one close call before. I went to the video store with the intent of renting it. I had the box in my hand. I ran into a buddy who’s into shit like this and I asked him, “You said this one was good right?” And of course he said it was, and while talking it up he mentioned that the soundtrack was by Wang Chung. I didn’t know it was gonna be that kind of party, so I put it back.

But I’m here to tell you that even for those of us who don’t necessarily wanna have fun tonight, and who most certainly do not want to Wang Chung tonight, this is a good picture. I don’t generally like something to be dated to the ’80s, and especially musically. But this one captures the era well, coming across more like a great period piece or time capsule than like somehting that’s dated. And the soundtrack fits that real well. They only sing on the opening title track and the rest of it they just sit there and keyboard away and it works real good for the mood. And I don’t think this could be intended but the associations I have with that kind of cheesy ’80s white people keyboard music perfectly captures the heart and soul of the setting and the topic of counterfeiting. It’s slick and electronic (fake), it’s trying to be hip, it probaly has a ponytail and sunglasses on.

Matter of fact, I can’t really say this captures the essence of that side of L.A., because I’ve never lived there, but based on the times I’ve been there this really does a good job of capturing how it all looks to me. At any rate it’s a very solid and original crime/action/police procedural type movie. Everybody have fun tonight.

car chases William Friedkin
This entry was posted on Wednesday, November 21st, 2007 at 6:40 pm and is filed under Action, Crime, Drama, Reviews, Thriller. You can follow any responses to this entry through the RSS 2.0 feed. You can skip to the end and leave a response. Pinging is currently not allowed.