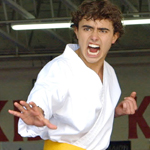 Okay, maybe I do. I just like to mention TOKYO DRIFT whenever I can. This is a weirdly transparent KARATE KID rehash, arguably closer to a straight up retelling than the official remake with Jaden Smith and Jackie Chan. There’s even a wax on/wax off reference like some remakes would want to do, and it plays with your expectations of him being given a nice car as a gift. Instead he gets a bike, which he rides around the suburbs, keeping him a Martial Arts Kid when he seems to be on the verge of Martial Arts Manhood.

The kid is Robbie (Jansen Panettiere, THE PERFECT GAME), the bully is Bo Whitlaw (Matthew Ziff, KICKBOXER: VENGEANCE), the girl is Rina (Kathryn Newton, BAD TEACHER, PARANORMAL ACTIVITY 4). Grandma (Lyn Mahler) somehow kept this from him, but Robbie’s Uncle Glen and Aunt Cindy run a martial arts school called Space Coast Dojo. So rather than meeting a Mr Miyagi or a Han, it’s his relatives who teach him. And they are played by two martial arts movie icons. 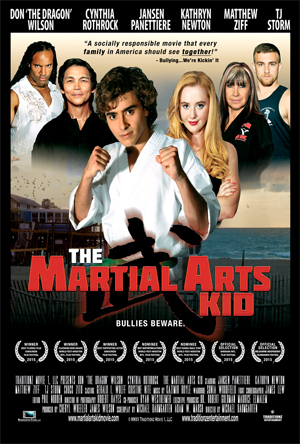 Can you imagine having Cynthia Rothrock and Don “The Dragon” Wilson as your aunt and uncle? This is a natural role for both of them because they’ve always tended to be a little square and more convincing playing wholesome than edgy. Now they’re older and they don’t try to fight it. They’re quite comfortable being adults who don’t try to be cool but do impress you when they keep having reasons to beat up bullies. Wilson gets to beat up R. Marcus Taylor, the guy who played Suge Knight in STRAIGHT OUTTA COMPTON. Rothrock gets to use a beach towel as weapon and kick sand in a bully’s face.

The setting is Melbourne, Florida, a resort community full of palm trees, fountains and cruise ships. It’s supposed to be one of those small towns where everybody knows everybody, but instead of some old timer at a general store it’s the clerk at a convenience store that welcomes Robbie to town, looks after him and tells him who to look out for and stuff.

Wilson gets to spend alot of time going over techniques with students or introducing distinguished guests with cool nicknames and titles, and there are many martial arts demonstrations including by little kid nunchaku experts and a huge crowd of students practicing in a gigantic hotel conference room. I definitely suspect alot of this is just Wilson for real teaching the actors as he would teach anyone. It seems completely authentic. He expresses alot of ideas about strategies and philosophies about discipline that seem very sincere.

There are some training montages. There’s also a going to the zoo montage.

The Cobra Kai equivalent is an MMA gym called Dojo Extreme, where Bo hangs out. They wear all black, they have a grim reaper log and their teacher, Kaine (T.J. Storm, KICKBOXER: VENGEANCE), preaches the mantra “Assess. Assert. Dismantle.” He has a Vader-Obi Wan type relationship with Uncle Glen, but luckily their inevitable duel (in a batting cage instead of a Death Star or lava planet) is not to the death. Just like in BLACK COBRA, I couldn’t stop thinking of Storm as a Keegan Michael Keye character, but this time at least I think he’s being at least a little tongue in cheek. He has a beautiful girlfriend (Natasha Blasick, PARANOID ACTIVITY 2) who gets jealous of him spending too much time staring at himself in the mirror, so she walks over to a random dude (Billy Smith, who has Blade cosplay pics on his IMDb page), fake cries, and in about one minute gets him to fight Kaine on her behalf. There are alot of scenes like this where it seems like it could be written by a 12 year old boy, and you wish they’d had the luxury to say “Uh… no humans act like this. Let’s rework this.”

Eventually it has to turn into a martial arts duel between Robbie and Bo. There’s no tournament, it just happens because Rina breaks up with Bo and he still keeps bothering her. Robbie gets an OUT FOR JUSTICE style montage where he goes to different establishments asking where Bo is and kicking and punching his friend. (A video of one of the fights goes viral within the span of the montage.) I was expecting Uncle Glen to to scold Robbie for stretching the definition of “self defense or defense of others” – it’s refreshing when they skip that beat and go straight to a dojo vs. dojo battle. Also, maybe it’s kind of progressive, recognizing that Bo’s harassment and locket-yanking are the behaviors of an abuser and signs of worse to come.

My favorite thing about this sequence is that at the beginning he goes to Dojo Extreme and the doors are locked. At the end of the montage he tries again, the door is unlocked so he goes in, but the lights are off. But suddenly they flip on and everybody from the dojo is posed together with their arms folded all badass. Man, how long had they been standing there like that? 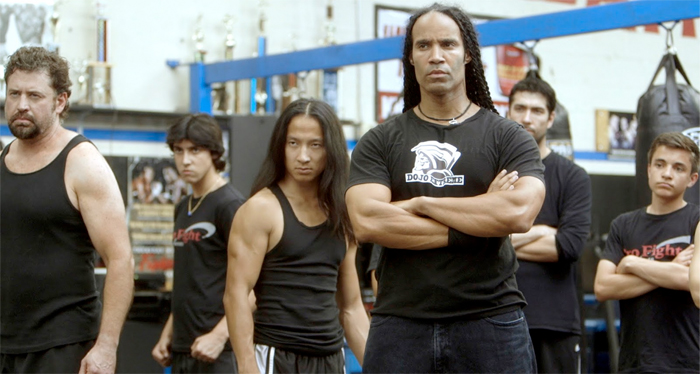 The fights (choreographed by James Lew, the bad guy from AMERICAN NINJA 5 and BALANCE OF POWER) are pretty simple, but competently staged and shot. The climax is a big brawl with a bunch of different supporting characters (including Aunt Cindy) in their own individual fights. Kaine just sneaks off and Uncle Glen follows him to the batting cage where they test their skills against each other in the movie’s best fight. Yes, there are balls being pitched at them while they battle. I thought it was really funny that this was not a challenge, Kaine really just tried to peace out while all of his students were getting beat up! It seems cowardly, but maybe he had a big baseball game coming up he had to practice for, I don’t know.

The look is brightly lit, overly clean digital video like a Lifetime movie. The story makes no attempt at originality. But the likable cast and overall positive attitude make it easy to like. It should have the martial arts movie equivalent of that seal they put on the movies with the good Christian values, but there’s no such thing, so they just have the regular one. Actually, there are five Dove Foundation seals on the cover. I think that means it’s five times as family approved as if there was only one seal.

Of course Wilson and Rothrock are the reason you’ll watch it, and they’re a warm presence, but I think the success of the movie comes down to Panettiere, who is the younger brother of Hayden, and kind of a smiley, Dave Franco meets Zac Efron charmer. He’s not, like, my ideal action hero, but he’s very natural and if he didn’t seem like such a nice kid this would not be very fun.

Newton also has a good girl-next-door quality, though there’s that usual problem where you wonder what the hell is wrong with her to have the bad guy as her boyfriend. At no point does he seem to have any good qualities. Also, Bo and the other bully actors look much older than Robbie, Rina and the other kids. They look really funny in the class room with them. What the hell are those adults doing sitting in those desks?

By the way, I don’t know if this is really intended as the beginning of a MARTIAL ARTS KID ongoing saga, but at the end it seems resolved and over and then there’s a post-credits style (but pre-credits) scene where we learn that Bo has not been humbled by this experience, he’s out on a yacht plotting his revenge with the full backing of his rich asshole father… Chuck Zito (HOMEFRONT)! I can spoil that even though it seems like a surprise scene, because they actually spoil it on the opening credits: “and Chuck Zito as ‘Frank Whitlaw’.” So I really did have it in the back of my mind the whole time that we were gonna eventually meet his dad. Then you just barely see him. But that’s okay, I guess it’s kinda like how they mentioned the Joker at the very end of BATMAN BEGINS to get you excited for next time. Can’t wait for THE MARTIAL ARTS KID VS. THE YACHT DAD.

P.S. Full disclosure: one time I got my picture taken with Don “The Dragon” Wilson and it was awesome. 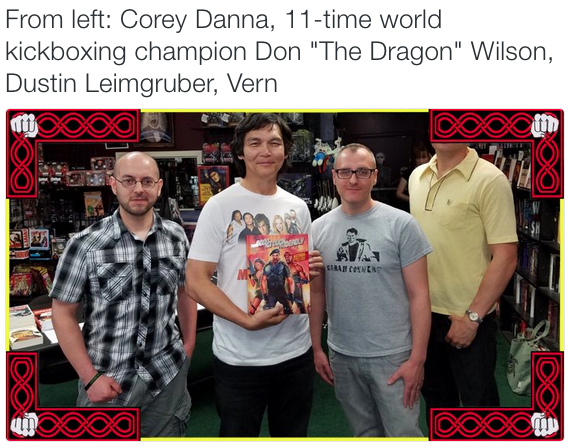 Cynthia Rothrock Don "The Dragon" Wilson Jansen Panettiere Matthew Ziff T.J. Storm
This entry was posted on Tuesday, November 15th, 2016 at 11:38 am and is filed under Action, Family, Martial Arts, Reviews. You can follow any responses to this entry through the RSS 2.0 feed. You can skip to the end and leave a response. Pinging is currently not allowed.

5 Responses to “The Martial Arts Kid”