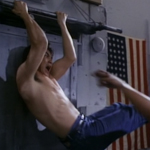 We meet our hero Jack Dillon (Don “The Dragon” Wilson) as the opposite of a guy killing a prostitute: he’s a guy beating up a pimp. “The broken nose is for the girl. The vasectomy’s free.” And he brings one of the pimp’s stable back to her mother. Dillon is not for-hire, though. He refuses payment because “I don’t charge to take out the garbage.” Or, I assume, to unload the dishwasher.

But now Sweet is turning his “affections” to another woman: Shanna (Deirdre Imershein, SCANNER COP), singer of Shanna and the Bad Girls, who are performing their #1 hit “My Love” at Eddie Deangelo’s Wall-Berlin club. She’s really on the rise right now. Here she is on the cover of Spin— er, I mean Rock magazine: 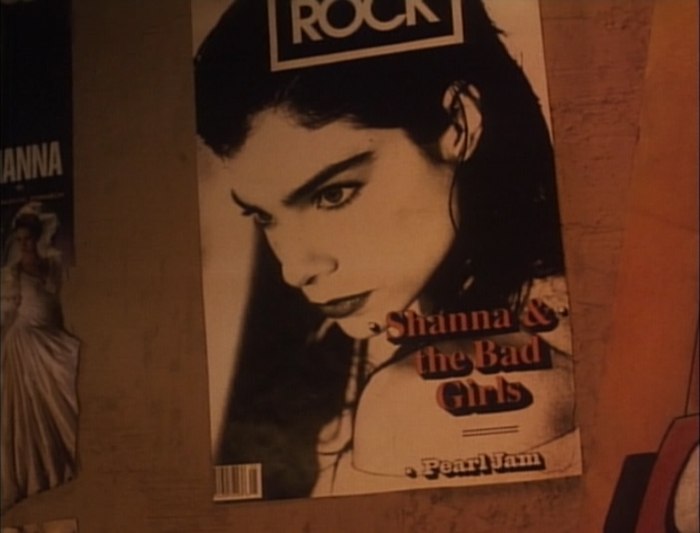 (That’s kind of impressive that the filmatists put Pearl Jam on there too, because they didn’t become huge until a little bit after the movie was made. Their second single “Evenflow” came out only a month before BLACKBELT did.)

Anyway, Sweet is a stalker who sneaks in and leaves the finger of the woman he murdered in the green room for Shanna.

The beauty in the movie is the weirdness of this John Sweet character. He has the action movie backstory: he was in Vietnam, so he likes putting playing cards on dead bodies and cutting off fingers. “He joined Special Forces when he was 18. Martial arts expert. Then he disappeared for ten years. He resurfaced recently in Angola,” where he was a mercenary.

But at the same time he has the slasher movie backstory. As he looks at Shanna onstage he sees flashes of another woman singing: his mother (Kimberly Lord, apprentice editor, EVE OF DESTRUCTION). Dillon’s old partner from when he was a cop, Sturges (Alan Blumenfeld, THE RING, K-9), says that Sweet’s mother was raped when he was 12 and that he killed the rapist, but flashbacks tell the story differently. 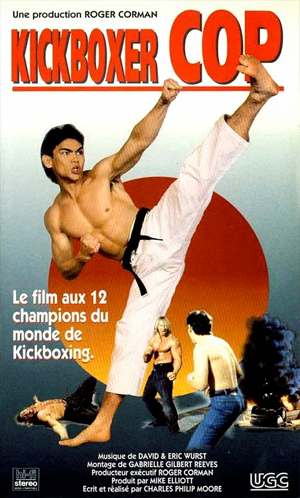 The moment I knew this movie was special was when Sweet kneeled down in front of a bunch of candles and a joint shrine to his mother and Shanna, listening to Shanna’s record. He takes his shirt off, hangs a severed finger on a necklace around his neck and says “When I heard the song I knew it was you, Mother.” Then he practices punching while remembering watching his mother’s lounge act and the time she called him “my little husband.”

You get what it’s implying here? This guy is literally a motherfucker! Then he walked in on Mom having sex with a guy (telling him “I love you”) and that’s when he went crazy.

So it’s very much in the tradition of SLEEPAWAY CAMP, PIECES and other walking-in-on-a-sex-act-messed-him-up slasher movies. But slipped into the template of a martial arts movie.

Like a slasher he has the ability to be everywhere and to show up out of nowhere. Even when mobsters are trying to commit a murder to blame on him, he’s snooping around in the shadows.

Jack gets involved when Sturges  recommends him to Shanna and her best friend/roommate Barbara (one-timer Barbara A. Graham). They want someone to protect her who’s not a cop, because she hates cops.

“What do you have against cops?”

“Your father rape you?”

So Shanna has had a troubled life, and she and Jack throw alot of attitude at each other, but she soon reveals herself to be a sweetheart. She’s also kinda broken: she’s a little too forgiving of her gangster record label boss Eddie Deangelo (Richard Beymer, WEST SIDE STORY, SILENT NIGHT DEADLY NIGHT 3: BETTER WATCH OUT!) and her abusive manager/ex-boyfriend Bobby Machado (Jack Forcinito, SILENT NIGHT, ZOMBIE NIGHT) and she tries to use sex to control Jack. He doesn’t take the bait and just sits in his car punching his steering wheel.

Shanna and Barbara end up hiding out at Jack’s place, which is of course a large garage with a punching bag and a wall decorated with hanging flags, some nunchakas and some sais.

By the way, this is the type of movie that lists championship titles after the names of the actors. I always like that. 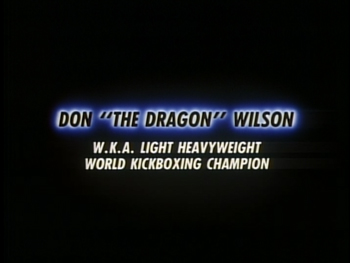 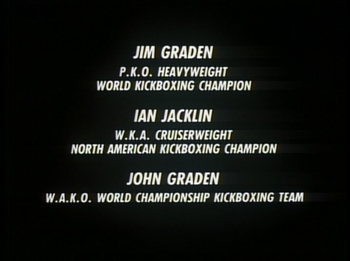 And I mean they just keep coming. That second one there is a couple screens in. But besides the protagonist and antagonist there’s not alot of focus on any of the fighters. I guess every random dude he fights throughout the movie must be a champion of something.

It’s mostly routine stuff for a movie of this type, but enjoyably so. There’s a beat-up-guys-in-a-bar-to-get-information scene. He kicks a guy through a window. He punches his fist through a wall. Their car flips and gets shot at until it explodes. There’s a shootout in a warehouse maze of boxes. There are a bunch of funny lines. Eventually he has to fight his way out of like 30 guys who attack him using all the weapons in his dojo. When he gets to Sweet he offends his crazed mind by ripping off his severed finger necklace. Good move. If you’re wondering, yes, this is a two-guys-in-jeans-but-no-shirts-martial-arts-duel climax. Sweet grabs Dillon’s katana and Dillon fights it off using the sheath. Good symbolism there about using violence for self defense.

The credited director is Charles Philip Moore (ANGEL OF DESTRUCTION), and IMDb lists Rick Jacobson (FULL CONTACT, BLOODFIST VI and VIII, four episodes of Ash vs. Evil Dead) as “second director.” The screenplay is credited to Moore with story by David S. Green & Neva Friedenn (the original THE TOOLBOX MURDERS) & Paul Maslak (BLOODFIST IV-V). It’s executive produced by Roger Corman and produced by Cirio Santiago, so it’s a b-movie power team. Together this strange group came up with just the right mix of formulaic and crazy.

Alan Blumenfeld Charles Philip Moore Cirio H. Santiago David S. Green Deirdre Imershein Don "The Dragon" Wilson Jack Forcinito Kimberly Lord Matthias Hues Mia Ruiz Neva Friedenn Richard Beymer Rick Jacobson Roger Corman
This entry was posted on Monday, March 13th, 2017 at 8:48 am and is filed under Action, Martial Arts, Reviews. You can follow any responses to this entry through the RSS 2.0 feed. You can skip to the end and leave a response. Pinging is currently not allowed.