Man, how did I miss this one before? I mean I’m not sure it’s rocketing to the top of my list, but it’s probaly gonna be scribbled somewhere in the margins of the list at the very least. It’s kind of like a really good Dudikoff movie that occasionally reaches for STONE COLD level awesome. It’s got quite a collection of the great action movie tropes: stumbling across a liquor store robbery, cop who gives up his badge, partner who risks her job to help him continue his investigation, undercover infiltration of a mysterious organization, evil person pretending to be good to run for mayor (Brigitte Nielsen!), best friend murdered, chop shop, nice grandma who you just know is gonna get murdered, incriminating video tape… 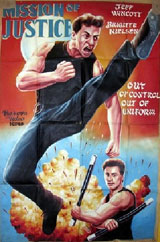 Wincott plays a cop named Kurt Harris who gets disillusioned due the red tape, etc. and because of no justice or whatever. First thing he does after quitting is go to the gym and hang out with his old friend, the former heavyweight champion boxer Cedric Williams, who’s played by Tony Burton (Apollo Creed’s trainer and then Rocky’s corner man, he appeared in all six ROCKY movies and in the last one got to say “Let’s start building some hurt bombs!”)

Of course, that night Cedric gets murdered by the evil politician and her henchmen (a bunch of burly dudes in suits with hair down past their shoulders) so Kurt goes to join her Guardian-Angels-meets-martial-arts-clan-meets-self-help cult, the Mission of Justice, to investigate from the inside. That’s a great moment because at first you assume MISSION OF JUSTICE is just a rejected Seagal title, it’s gonna be about a guy who’s out for justice or out for a kill, that’s his mission. But then you see MISSION OF JUSTICE written on a sign outside a gate and you realize that no, it’s about a certain institution called the Mission of Justice. The members are called “Peacekeepers,” they wear white t-shirts, rings and belt buckles with yin-yangs on them. So Harris works his way up the ladder and tries to get to the bottom of who killed his friend.

But let’s back up a little bit, because the killing of his friend is one of the great parts of the movie. Brigitte and her boys come into the gym and start threatening the champ, so he challenges her brother Titus to a fight to settle their dispute. Unfortunately, the champ is the best at punching but doesn’t realize he’s fighting a kickboxer, and that whole leg thing fucks him up. And he doesn’t have a guy to train his legs like Michael Jai White did in UNDISPUTED II. So Titus breaks his hands, defeats him, and then actually takes his championship belt! But it’s Brigitte herself that pulls out two big knives and slashes his throat ninja style.

Harris is a freshly ex-cop but he’s the kind who does martial arts, so he does well at the Mission of Justice. I’m not sure how they have so many Peacekeepers though, because the initiation seems unnecessarily tough. He has to stickfight his way through a gauntlet of about 50 guys who all have sticks themselves. According to that Stack of Dimes interview Jeff Wincott had never used sticks before, they just trained him for 45 minutes before the scene, but you would never guess that. It looks like he spins them around real good even when they show it in slow motion.

There’s alot of fights with drills, chainsaws, guys flying through the air, etc. One thing I love is that his partner from his police days, Lynn Steele (Karen Sheperd), is a little badass. Early on a guy picks her up like a log and whacks her head against a shelf and you kind of figure that’s the end of that character, but no. She’s real tiny but she does martial arts too and just goes into a rage and beats the hell out of guys. It’s funny when she’s in situations where she ought to pull her gun and arrest somebody but she just keeps punching them in the belly like 25 times and kicking them in the nuts, etc.

Brigitte Nielsen is of course a hatable villain. And I’m pretty sure there’s one scene where she has her trademark flattop, and the rest of the time she has long hair.

I can see why those guys like Jeff Wincott. He’s kind of in the Mickey Rourke or Wesley Snipes school, a guy who is a real actor but also fights. I’m not saying he’s as good as either of those guys, but it’s nice to see a guy in a cheesy movie like this who does a great job of both the martial arts and the acting. He also looks alot like Michael Wincott, the gravelly voiced dude from ALIEN RESURRECTION, THE CROW, DEAD MAN, etc. Maybe because they’re brothers or maybe it’s a coincidence, or a combination of the two.
major spoilers next three paragraphs

At times the movie feels pretty generic, but the climax is so great it takes it to the next level. Brigitte is doing a press conference right on the verge of being elected mayor. Meanwhile Harris is fighting Titus somewhere in the same building. The fight goes on for a while and suddenly Titus tears open his coat and reveals that he’s wearing the championship belt underneath! By that point I had totally forgot about it so it was hilarious to find out he was wearing it around pretending to be the champ. Then Harris kicks him through a window and he lands in the middle of the press conference. Billy (who I never mentioned before but you should watch the movie anyway so I can’t tell you everything) walks in and tells the reporters who killed the champ. Brigitte tries to play it cool but then somebody else puts a security tape on the monitor that shows her standing there torturing Billy and talking about how she murdered the champ.

You know that old cliche: they secretly tape the bad guy revealing the horrible truth and they play it on TV or whatever and that solves everything. I’ve always wanted to see one where they play the incriminating tape and then nothing happens. Because that seems to happen alot. Or how about the incriminating tape works but then during the end credits there’s a fake Fox News show where they talk about how Brigitte was right. I mean, the cops that beat Rodney King got off. Oliver North actually had people supporting him when he ran for Senate. Dick Cheney has a classic rock show on XM satellite radio. (I made that last one up – arguably.)

But Brigitte doesn’t think about that. She’s at that moment where the shit hits the fan and instead of keeping a straight face like Oliver North she panics and pulls out her two big knives and tries to cut her way out. So that probaly comes off pretty bad on the news. I’m not sure if her campaign can recover from that gaffe.

The director is Steve Barnett (you know, the post production supervisor of LIVE FREE OR DIE HARD). Wincott went on to do other action movies (he played the brother of the re-cast Van Damme character in UNIVERSAL SOLDIER 2-3) and more recently TV shows including 24, SONS OF ANARCHY and THE WIRE. I’ll have to check out some more of his movies.

Brigitte Nielsen DTV Jeff Wincott
This entry was posted on Sunday, May 17th, 2009 at 11:29 pm and is filed under Action, Drama, Horror, Reviews. You can follow any responses to this entry through the RSS 2.0 feed. You can leave a response, or trackback from your own site.

23 Responses to “Mission of Justice”