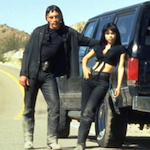 PERDITA DURANGO is based on a 1992 book called 59° and Raining: The Story of Perdita Durango by Barry Gifford (who co-wrote the script with de la Iglesia and two others). It’s part 3 in the Sailor and Lula series, part 1 being the basis of WILD AT HEART. (Isabella Rossellini played Perdita in David Lynch’s movie.) END_OF_DOCUMENT_TOKEN_TO_BE_REPLACED

It got me instantly. Opening with Kong waking up to a perfect needle drop and a sunny day on Skull Island, he scratches his ass as he groggily stumbles to the waterfall for a shower. It’s just a great example of those times I love when monsters just get to live a normal life instead of always leaping through the air and roaring at the camera. END_OF_DOCUMENT_TOKEN_TO_BE_REPLACED 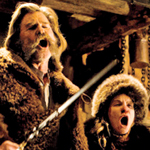 Here’s something brand new for a Tarantino movie: I didn’t immediately love it. I’m honestly still trying to figure out how I feel about it. I’m not sure I get it. I remember that with both INGLOURIOUS and DJANGO I had misgivings on the first viewings that later seemed completely irrelevant. With the former it was thinking that Brad Pitt seemed like Brad Pitt playing a funny character, he didn’t inhabit the character the way previous Tarantino leads had. With the latter it was that Tarantino had never done a movie that followed one character chronologically, and it seemed kinda too simple for him. Both of those seem like dumb complaints to me now, and I loved both movies without reservations on subsequent viewings. Even so, their first times I liked better than this first time. END_OF_DOCUMENT_TOKEN_TO_BE_REPLACED 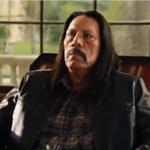 Trejo’s face is even more rugged than ever, if possible, and he doesn’t have to joke around. He’s fun to watch just being that same character, but now equipped with various high-tech variations on machetes to chop people up with. Robert Rodriguez (credited as sole director this time, and also with his name above the title, but only a co-story credit) once again fills the movie with a huge, unlikely cast, mostly playing colorful gimmicky characters: Mel Gibson (PAPARAZZI) as a weapon inventor/space cultist planning to blow up the world, Demian Bichir (2012 best actor nominee for A BETTER LIFE) as a revolutionary/terrorist/something, Amber Heard (DRIVE ANGRY) as a government agent undercover as a beauty queen, Walton Goggins/Cuba Gooding Jr./Lady Gaga/Antonio Banderas all playing the same assassin called El Camaleon, Vanessa Hudgens (SPRING BREAKERS) as a girl that’s in one part, Sofia Vergara allowing Salma Hayek some dignity by stepping in to play the deadly Madam character with army of killer prostitutes (see also Lucy Liu in THE MAN WITH THE IRON FISTS, Zoe Bell in BAYTOWN OUTLAWS, etc.) END_OF_DOCUMENT_TOKEN_TO_BE_REPLACED

SAVAGES is the new crime film from Oliver Stone, about two young idealistic pot entrepreneurs taking on a ruthless Mexican cartel (which is one of the most common types of cartels). The tale is narrated to us by O (GREEN LANTERN’s girlfriend Blake Lively) who is the shared lover of botany genius/philanthropist Ben (Aaron KICKASS Johnson) and Iraq vet/muscle-of-the-operation Chon (Taylor JOHN CARTER Kitsch). The two grew up together as surf bums in Laguna Beach and then one day decided to bring home marijuana seeds from Afghanistan and create a new strain. And the shit blew up like Apple. END_OF_DOCUMENT_TOKEN_TO_BE_REPLACED