Well, it’s a little more familiar than I was hoping but I also think you should just see it fresh so come on man, don’t read this review until you’ve already seen it. This is gonna be all SPOILERS.

Turns out at the end that Jonesy was behind the whole thing.

I remember years ago we would talk about what another ALIEN movie should be about. I always thought it would be cool if it was about the “Space Jockey,” which is the nickname for the unexplained giant dead skeletal guy they find sitting in that big gun. Not a prequel about how he got there, but a story about that race, these big clunky elephant-faced skeleton men battling with the Aliens. No English. Maybe subtitles. Mel Gibson could direct. Or some guy that does nature documentaries.

Then there was a point where Ridley Scott and James Cameron were in talks to team up as director and writer of an ALIEN 5, and Scott said it would in fact be about those guys. Sounds amazing! So the the studio hung up the phone and called the director of RESIDENT EVIL to do a shitty ALIEN VS. PREDATOR movie that nobody liked.

A decade later, here we are. The AvP franchise has been dead long enough that Scott agreed to come on for an ALIEN prequel. Then during development they proudly stated that it had turned into something else, a standalone sci-fi movie that takes place in the same universe as ALIEN, but is not a prequel. The best possible outcome. 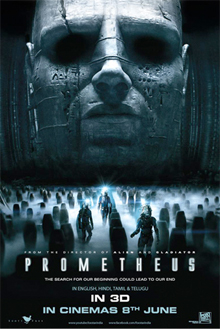 Except, come on dude, this is an ALIEN prequel. It has the Weyland Corporation (Weylan-Yutani in ALIEN, Weyland-Yutani in ALIENS). It has a creepy corporate-lackey robot with milky white goo inside him. It has the space jockeys. It has the space jockey gun. It has their space ship. It has H.R. Giger interiors. It has a sculpture and another thing that look an awful lot like Aliens. It has vases in a chamber laid out just like the Alien eggs. It has cryo-chambers and a crew of working class people in it for the money who go to a weird planet referred to by LV dash (number) where they go to explore something with helmet-cams like in ALIENS and they discover some dangerous monstery shit that they didn’t bargain for and there’s a dissection scene and an argument about quarantining somebody and a blowtorch used as a weapon and a scanning for lifeforms in a tunnel and an underestimated woman in her underwear has to fight to escape without bringing something bad with her and it ends with narration that’s one of many deliberate references to ALIEN.

a.k.a. ALIEN MINUS PREDATOR MINUS ALIEN

And I really liked it but I think that is its weakness – it’s based on the ALIEN template, so just like ALIEN 3-4 you’re forced to compare it to a flawless movie that it could never live up to. Plus it has that unique prequel issue of ruining the mystery – is it really a good idea to show us what that space jockey dude was? Well, I feel like I’m okay with it right now. It’s kinda what I thought was going on, but with some interesting nuances, and it remains creepy and mysterious. (I reserve the right to change my mind when I watch ALIEN again in a while. I watched it last week and by the way I don’t know if anybody’s noticed this but it looks fuckin good on the blu-ray.)

So my favorite part of PROMETHEUS actually is the very opening, the most un-ALIEN-like and least explained part of the movie. It starts with a series of stunning overhead shots of natural land formations, strange rocks, roaring waterfalls – basically, helicopter shots from an Imax documentary on another world. And then a strange otherworldly muscleman comes out and… does something. If we were supposed to later figure out what exactly happened there I didn’t catch it, and I’m okay with that. For those few minutes I really felt like I was witnessing something I’d never seen before.

(I won’t be able to resist reading explanations of that scene, but for now I like that there are some mysteries left, like the Space Jockey was up until now. I will also have to wonder what that cool red robosuit thing was that she walked past on Prometheus toward the end.)

Before we continue, I want to note that I just saw an ad for PROMETHEUS that cut directly from an H.R. Giger set to a holographic can of Coors. It was one of those hybrid movie/product commercials. Enjoy PROMETHEUS and Coors. Drink responsibly.

The technical aspects of the movie are flawless. It looks gorgeous, it looks real, you feel like they filmed it on location on the real LV-223, not green screens (or even LW-328, where alot of LV stuff gets shot because of tax breaks). There are some non-human entitites in the picture and while they are not as groundbreaking design-wise as Mr. Giger’s original Alien, they are state of the art creations. I’m gonna assume it’s the motion capture and the digital animation and what not because of how well they move, but they seem to have the tactile quality of good animatronics or actual alien monsters. Also the space ships, the suits, the computer displays, everything is very slick and cool looking. The 3D (actual 3D!) looks good (although not essential in my opinion). A standout is when it’s used for degraded or dot-matrixy type 3D holograms. (Also hat’s off to the 3D-ified Scott Free production company logo at the beginning.)

So it does what a great science fiction movie does, it whisks you off to another world, makes you feel like you’re really experiencing it. Although limited to a crew of 17 on the ship it has something of a sweeping epic type of feel. Maybe that’s why the robot David (Michael Fassbender, excellent as always) is obsessed with LAWRENCE OF ARABIA. (His other interests include Clone Ripley-style trick basketball shooting. He’s real good at it, partly because he’s a robot, partly because he’s got years to practice while the humans sleep.)

Unfortunately, somewhere in the middle after I’ve been whisked away and all that I did start to be bothered by things the characters did that I had trouble buying. The big one is Dr. Holloway (Logan Marshall-Green), boyfriend of our heroine Shaw (O.G. Girl With Dragon Tattoo Noomi Rapace) and archaeologist. Their discovery in a cave on Earth led to this mission in far off space, where they discover corpses and constructions of an alien race that they believe support their theory that man was created by an alien race. This is by far the biggest discovery in human history, one that changes everything, but instead of being excited, instead of being in awe, instead of being horrified… the motherfucker gets all mad that there are no living ones to talk to. He goes to drink vodka and sulk.

I’m willing to forgive smaller ones like Shaw being an archaeologist who also knows all about surgery – maybe they have better education 75 years from now – but the way Holloway acts makes him both less likable and less believable than the characters we love from ALIEN. In fact, I gotta say that in general these characters oughta be more impressed by what they’ve discovered here. But maybe people are real jaded in the future.

The ice queen boss Vickers (Charlize Theron) has some overly obvious motives, but I like that she’s not completely one dimensional, she does sometimes do the right thing, I think. But each of these characters have a memorably bad line. Holloway’s is when he whines something like, “But I wanted to talk to them, baby!” Vickers’s is something that ends with “(dramatic pause)… father!” Like we didn’t figure that out at the beginning when she looked mad that old man Pearce said David was the closest thing he ever had to a son. We’re way ahead of you, lady.

Some of the stronger characters (especially Idris Elba’s Janek) are not really complex but work well as people who are not always happy but do have a sense of humor that they use to try to get through the job and do the best they can. Too bad we don’t get more time with them.

Shaw I think is a worthy heroine though. She earns our sympathy mostly by battling through some extreme circumstances – especially the horrifying high-tech self-surgery scene, one of my favorite parts. (Is it fair to read that as a statement about the state of American health care, with this woman having to commandeer a system designed only for men and rejigger it to save her life?) But she also adds a small amount of thematic depth with her faith, symbolized by a crucifix necklace she got from her father, exemplified by her not-yet-proven belief that humans were engineered, and also by her willingness to still leave open the possibility of a God who created the space jockeys. I love that after David has put her through basically the worst shit possible he puts salt on her wounds by confiscating her cross (in case of contamination) and putting it in a plastic vial like a urine specimen, or biological waste, or crack.

But she doesn’t really hold a grudge, because he’s just a fuckin robot. In that sense she might be more enlightened than Ripley.

A couple notes for exploring this planet:

The movie really gets crazy in the last chunk, where Holloway turns kinda SUNSHINE and Shaw has to deal with a monster impregnation and David is trying to introduce his creator to his creator’s creator. Basically there are two overlapping instances of all hell breaking loose. (I guess it’s all hell breaking loose but with one half in one location and the other half in a second location.) This is probly the most narratively messy part of the movie but I kinda like that because it’s the part that feels less like it’s following the ALIEN formula. And it’s a great concept for what indulgent things the super-rich could try to do in the future. I never saw THE BUCKET LIST, but I bet he has those guys beat with what he does here.

The bit at the end where a pre-Alien type monster is formed is well-done but to me a little too “okay, you want to see one of those Aliens, so here ya go guys.” But the crowd I saw it with (who by the way applauded at the end of the movie) seemed very excited by it.

I bet this will be the less popular part of the movie, but I like the absurd way it ends, with Shaw suicidally heading for the home of the God Race (like Prometheus defying Zeus, maybe), accompanied by her sidekick, the Peter O’Toole-idolizing severed head who betrayed her. That’s a movie I would love to see, and that they should probly never make.

aliens Charlize Theron Damon Lindelof Guy Pearce H.R. Giger Idris Elba Jon Spaihts Michael Fassbender Noomi Rapace Ridley Scott
This entry was posted on Saturday, June 9th, 2012 at 1:43 am and is filed under Reviews, Science Fiction and Space Shit. You can follow any responses to this entry through the RSS 2.0 feed. You can skip to the end and leave a response. Pinging is currently not allowed.