It got me instantly. Opening with Kong waking up to a perfect needle drop and a sunny day on Skull Island, he scratches his ass as he groggily stumbles to the waterfall for a shower. It’s just a great example of those times I love when monsters just get to live a normal life instead of always leaping through the air and roaring at the camera. END_OF_DOCUMENT_TOKEN_TO_BE_REPLACED

GODZILLA: KING OF THE MONSTERS is not the perfect American Godzilla movie of our dreams, nor is it one that takes a thrillingly new angle on giant monsters, like SHIN GODZILLA did in 2016. Honestly I expected to like it more than I did, being a devotee of director Michael Dougherty’s previous movie, KRAMPUS. (He’s also the guy who wrote X-MEN 2, URBAN LEGENDS: BLOOD MARY and SUPERMAN RETURNS, and then wrote and directed TRICK ‘R TREAT) But this is the first time an American version feels to me like it’s completely in the spirit of the Japanese films from Toho Studios, particularly the “Heisei period” from GODZILLA 1985 to GODZILLA VS. DESTOROYAH (1995), so we’re getting there. As a monster fan apparently more forgiving than some of my friends, I found plenty to love about it. END_OF_DOCUMENT_TOKEN_TO_BE_REPLACED 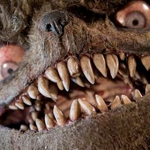 KRAMPUS came last year from director Michael Dougherty, the X2, SUPERMAN RETURNS and URBAN LEGENDS: BLOODY MARY writer who turned director with TRICK ‘R TREAT, the DTV anthology that seems to be growing into a minor Halloween tradition. I remember that being pretty good, but I think I liked this better.
END_OF_DOCUMENT_TOKEN_TO_BE_REPLACED

TRICK ‘R TREAT got a little bit of the ol’ internet hype when it came out last Halloween. It’s a Halloween-time horror anthology written and directed by Michael Dougherty (co-writer of X2, SUPERMAN RETURNS and URBAN LEGENDS: BLOODY MARY). It was made for a 2007 theatrical release but then it got bumped and fell behind the shelf and got misplaced for a while. I believe it got shown at one of the doll collecting conventions or something so some of the internet websights got behind it, but ultimately it got released DTV. But it’s “Warner Premiere,” kind of a respectable DTV outlet, actually. According to their websight they “develop and produce quality, direct-to-consumer content including feature-length entertainment for the rapidly growing direct-to-DVD market,” which is press release talk for “sequels to THE LOST BOYS.” But they’re pretty respected for not having done any movies starring Cuba Gooding Jr. END_OF_DOCUMENT_TOKEN_TO_BE_REPLACED