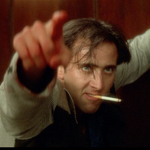 Sailor wears a snakeskin jacket, which he proudly says on more than one occasion “represents a symbol of my individuality and my belief in personal freedom.” He’s a self-professed “robber and a manslaughterer” and hasn’t “had any parental guidance.” He started smoking when he was “about four,” and cigarette brand loyalty seem to be one tradition he and Lula inherit from their parents. He knows many unsavory characters from his time as an underworld driver, including Lula’s mother Marietta Fortune (Dern’s real life mother Diane Ladd), who is so serious about keeping Sailor away from her daughter that she takes a hit out on him. She’s also so wicked that she frequently goes on cackling jags and is several times depicted as the WIZARD OF OZ witch, flying on a broom or watching them in a crystal ball.

Marietta is also a character who’s real good at making you uncomfortable. She seems to spend every second of her life either in emotional turmoil or faking it. She’s always crying, having fits and throwing herself into the arms of men, from the overly kind (Harry Dean Stanton as private eye Johnnie Farragut) to the evil (J.E. Freeman as the gangster Marcellus Santos). But even when she’s by herself she’s a mess. In one scene she paints her entire face red with slipstick, then pukes. 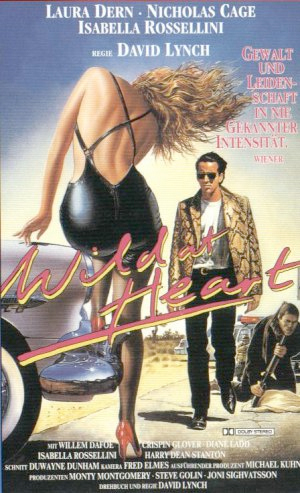 She’s easy to hate, but I kinda felt sorry for her too because early in the movie Lula tells a story about being raped by her father’s business associate when she was a kid and how her mother didn’t care at all. But we see in a flashback that in fact Marietta discovered the abuse, beat on the guy and then had him killed. So it’s not fair to say she didn’t do anything.

WILD AT HEART is the fifth feature directed by David Lynch, based on a novel by Barry Gifford (who later wrote LOST HIGHWAY for Lynch). I think it’s best appreciated as a juvenile delinquent drive-in movie from another dimension. Sailor gets out of the joint and runs off with Lula, trying not to get killed. It’s a road movie without much of a goal. They drive, have sex, dance, drive, have more sex, drive some more. Along the way they encounter bizarre Lynchian characters, many of them elderly, standing in the background, saying odd things and quite possibly played by actual crazies.

The worst guy they meet is Willem Dafoe as Bobby Peru, a slimy redneck variation on his biker character from THE LOVELESS, sporting fake gums and teeth like Chop Top, looking legitimately terrifying with a panty on his head, talking about himself in the third person, pushing Sailor back into a life of crime. Meanwhile he pushes himself inappropriately into Lula’s hotel room to “use the head,” pisses with the door open and brags about the power of his stream. This is a funny kind of sleaze, but it’s leading into a scene where he nearly rapes her only for the further humiliation of proving a connection between her childhood abuse and current sexuality. And this arguably isn’t the most upsetting degradation of Dern in the movie – that might be the shots of her crying and bloody-mouthed as a 12 year old Lula after being raped. The movie has a weird mix of goofiness and the truly disturbing, but I guess that’s Lynch’s thing.

I’m not sure I’ll ever be a full-fledged member of the David Lynch cult. But I definitely dug this more this time than when I saw it many years ago. Part of that of course is from a growing appreciation for Cage, who gets to do a little mega-acting within his weirdo James Dean routine. He flips out a little and finds many uses for his rock star posing. My favorite is when they’re grooving out int he car and for some reason one of his dance moves is to keep saluting over and over again. I noticed he also does it once in the roadside karate scene.

It’s easy to argue that Elvis is over-used as a generic icon of Americana, but I like how they do it here. After Sailor beats up a guy for rubbing against Lula on the dance floor (he’s so with it he throws his cigarette on the ground, then knocks the guy over so his hand lands right on it) he commandeers the heavy metal band Powermad so he can croon “Love Me” to Lula. Not only does the singer toss him the mic without hesitation, but the women at the show scream for him like it’s Beatlemania. This is not the real world, but it’s the perfect world for Lynch and Cage to explore together. And if it’s all an excuse just to have a movie end on Cage singing “Love Me Tender” then it’s okay, it’s worth it.

I’m less on board with all the WIZARD OF OZ references. I’m not sure why it’s such a major theme, and it seems a little too obvious a choice for random weirdness. I guess it gives Marietta an excuse to be a wicked witch, but does she need an excuse? Crispin G. Lover’s character didn’t need an excuse to put roaches in his butt (one of many little tangential anecdotes the characters tell).

Maybe the idea is that Lula feels comfort in clicking her heels together even though who is she fooling, the home there’s no place like is where some old slob raped her, and where her crazy mom is, and where she’s running the fuck away from. Her dad was burned alive at home. Home’s not that great. Though clearly hotels aren’t always better.

I don’t know. Because of elements like the Oz thing I used to think this movie was just self-conscious weirdness. I think one reason it works better for me now is that I’m far enough along my path of cinematic enlightenment that I don’t worry as much what other people think. I still believe Lynch fills most of his movies with surreal nonsense that his legions of worshippers read too much deep, intentional meaning into. Yeah, but so what? Shouldn’t matter to me when I watch it. I also suspect that some people respond to baldly passionate or “wild at heart” couples like these two, Mickey and Mallory, Romeo and Juliet etc. thinking that’s what love is about and not recognizing that they’re just young horny dummies who don’t know any better. But again, so what? If they want to find this romantic it’s a free country. 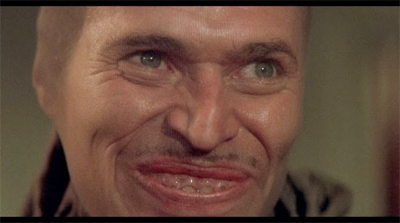 What I always have dug about Lynch is his sense of atmosphere, odd rhythms and tonal mixes that put you off balance and can really get under your skin. I would say this one has more jokes and silliness in it than LOST HIGHWAY or MULLHOLLAND DRIVE, and comically abrupt scene transitions and stuff like there’s at least a whiff of parody there. But at the same time it has so many senseless, nightmarish faces in it. Look at these motherfuckers! It’s genuinely creepy in a way that kind of inexplicably claws into your self-conscious instead of pushing the standard horror buttons.

It’s also the little things, like Lynch’s use of primarily 60+ year old supporting players in a movie for 20 year olds that make it feel one of a kind. He’s luring the college kids into a strange new, old world.

Cage has some really

goofy lines (“Man, I had a boner with a capital ‘o’,”) and is funny and lovable like he was in RAISING ARIZONA, but right in the opening scene he gets attacked by a hitman for allegedly trying to fuck Lula’s mother in the bathroom and he savagely bashes the guy’s skull on the ground until it kills him, then does a dramatic Elvis point to Marietta. That and the sudden headbanging guitar riffs that accompany it are a pretty harsh way to kick of the festivities. And you never know when it’s gonna happen again. You know what, I don’ t think this one’s gonna be like HONEYMOON IN VEGAS.

Okay, you won me over this time, WILD AT HEART. You’re a keeper after all. Happy Valentine’s Day President’s Day Weekend everybody.

Barry Gifford Crispin Glover David Lynch Diane Ladd Elvis Harry Dean Stanton Isabella Rosellini Laura Dern Nicolas Cage Willem Dafoe
This entry was posted on Thursday, February 12th, 2015 at 5:28 pm and is filed under Crime, Reviews. You can follow any responses to this entry through the RSS 2.0 feed. You can skip to the end and leave a response. Pinging is currently not allowed.