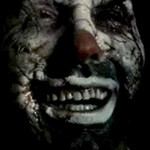 As an adult  in the ’70s Javier gets a job as the sad clown in a traveling circus. He immediately gets a crush on the aerialist, Natalia (Carolina Bang, AS LUCK WOULD HAVE IT, WITCHING & BITCHING), but she’s the property of his abusive funny clown superior Sergio.

Sergio is a really interesting character and great performance by Antonio de la Torre Martin (I’M SO EXCITED, VOLVER). He’s a new kind of scary clown because he’s intimidating when he’s in the makeup interrogating the new hire, but he’s much scarier out of costume when they all go out for drinks after work. Now he’s a ’70s tough guy in a leather jacket, getting drunk, abusing Natalia both physically and emotionally right in front of everybody, who are obviously uncomfortable with it but too scared to rock the boat. He holds court like a rock star, everyone listening to him and applauding his stories and jokes. 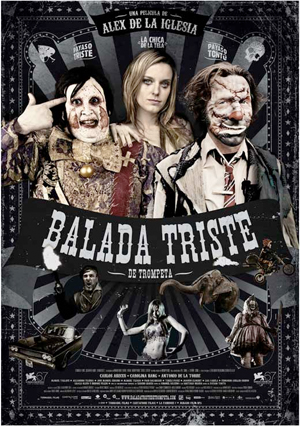 But Javier causes a scene simply by not laughing at Sergio’s favorite dead baby joke and saying that he doesn’t get it. It’s like a backwards version of the “am I a clown to you?” scene in GOODFELLAS where they actually are clowns and he mad because he doesn’t call him funny. Natalia stands up for Javier and ends up unconscious and bleeding on the floor before Sergio calms down and politely asks Javier what he wants for dessert.

After the incident Natalia decides she wants to hang out with Javier. You know, just as friends. He’s terrified. This is obviously dangerous for both of them, no matter how innocent. What Javier doesn’t get about Natalia, though, is that she’s screwed up and masochistically courts Sergio’s cruelty, sometimes getting off on it. I’m not justifying his abuse at all, the guy’s a piece of shit, but it complicates the situation for Javier, because he thinks he needs to rescue her, and doesn’t understand that she doesn’t want that. It becomes a really uncomfortable illustration of that juvenile male fantasy of being the nice guy who could save the beautiful girl from the asshole by being smarter and summoning a hidden reservoir of masculinity. And then when that doesn’t pan out it becomes that much more sinister line of thinking “all women say they want nice guys but really they want bad boys oh woe is me and therefore if I can’t have her [because I’m so nice] no one will!”

The thing is, despite all he’s been through, and despite his good intentions, it is hard to like this guy even before he goes mad. He’s not just a nerd, but a joyless, personality-less nobody. Most of the people at the circus are real nice to him, but he doesn’t offer much back, even when they ask direct questions. If there’s an interesting person inside there he doesn’t know how to share it with others. He’s not just a sad clown, he’s a blank clown. He can’t even say if he likes children or not, which offends Sergio. Despite his monstrous behavior, Sergio loves kids, and can’t understand people who don’t.

But Sergio does not love sad clowns. When he finds out there’s something between Javier and Natalia he beats him with a mallet on top of the strength testing machine. And he wins a prize. Brutal.

When Javier gets out of the hospital and comes back to “rescue” Natalia by beating Sergio’s face in with a trumpet he has no idea that he’s not the hero, that the rest of the troupe now know he’s psychotic, and that Natalia is not grateful at all, she’s terrified. He doesn’t even register that she was in the midst of passionate sex with her boyfriend and is suddenly sitting on the floor with his blood across her face. He thinks he’s fuckin Superman.

De la Iglesia is like Burton, Gilliam or fellow Spanish Civil War enthusiast Del Toro in that he squeezes all his passions and visual obsessions into his movies to give them an otherworldly, othertimely feel. So he’s got circus people going on a date to a Museum of Horrors and a carnival with a very elaborate ripoff of the Disneyland Jungle Cruise ride. It’s a larger than life horror movie and a dark fairy tale but sometimes it intersects with real historical events and people. Bits of era-appropriate current events and pop culture bleed into their world, for example when the circus shuts down Natalia ends up dancing at a place called The Kojak Club in front of a giant picture of Telly Savalas’s head.

But I think that the real de la Iglesia trademark is that the story takes a wild turn and I have no idea what type of movie I’m watching anymore. I mean, there still could be ghosts. Instead, Javier ends up on the run from the law, naked in the snowy woods, covered in dirt and leaves, eating raw meat off a deer that fell over a wall right into his lap. And it gets crazier from there, until he’s burnt off his face and stolen a pope costume and guns and he’s on a murderous rampage through the city. (To be honest I don’t like his evil clown look, but the way he achieves it is interesting.)

This all leads up to a big climax on a tower like a monster movie. And the scene charmingly ties in the skills of some of the circus performers including the daredevil motorcycle jumper who is trying to get to them and Natalia’s aerialist skills. Neither of which are much help.

I like this plot summary on the IMDb: “A young trapeze artist must decide between her lust for Sergio, the Happy Clown, or her affection for Javier, the Sad Clown, both of whom are deeply disturbed.”

I didn’t think about it like that, because Natalia never seems like the main character. The whole story is told through Javier’s point-of-view, starting when he’s a child long before we meet said young trapeze artist. But it’s true: she’s got the happy clown who is an abusive asshole but cares about kids and sometimes recognizes he has a problem, and you have the sad clown who is mostly nice to her but is completely unfeeling and then goes around fuckin maiming and murdering everybody and still doesn’t know he sucks. Two sides of a shitty coin.

(Another great example of this theme involves an old man offering kindness to him but that old man happens to be a despicable historical figure.)

The lines blur even more because Sergio survives the trumpet mauling when the troupe carry him to a nearby veterinarian and convince him to sew him up. He looks hideous and children literally call him a monster. Then he puts on his clown makeup and looks even worse. He looks like a hell of a villain, but now he genuinely is the victim who is trying to save Natalia from a dangerous man.

To me the one misstep is at the end when SPOILER Natalia decides she loves Javier and wants to go with him. I know she is a flawed individual and not necessarily supposed to be making the right decision, but this seems to validate his delusion of being the nice guy. It seems to say “Okay, I guess you are the hero of this movie,” which I don’t think he earned.

But this is a good one, a carnival ride that gets you dizzy and jumps off the tracks and ends in (spoiler) tragedy. The original Spanish title is “Balada triste de trompeta,” or Sad Trumpet Ballad. I think that’s a play on Spanish words for circus (not sure about that) and a bit of a joke about this guy destroying a guy’s face with the side of a trumpet, but it’s also a good description of the movie. A beautifully sad story of clowns and civil war and terrible relationships. <Sad trumpet sound.>

This review is dedicated to Nabrolean Dynamite. Although THE LAST CIRCUS is only 5 years old I swear he’s been trying to get me to review it every Halloween for a decade. Happy October, bud.

Alex de la Iglesia Carlos Areces Carolina Bang clowns Sanch Gracia Santiago Segura Spanish Civil War
This entry was posted on Wednesday, October 7th, 2015 at 10:26 am and is filed under Horror, Reviews. You can follow any responses to this entry through the RSS 2.0 feed. You can skip to the end and leave a response. Pinging is currently not allowed.

25 Responses to “The Last Circus”