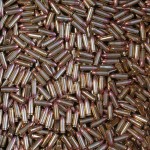 Hey folks, Harry here… 800 BALAS is brilliant, wonderful and perfection. The cold cracked heart of a cynic without familial love and respect that has killed their own inner child is the only type that wouldn’t appreciate this movie. A film that dreams of a community of Spaghetti Western Stunt Men – a dying breed trying to hold on to the culture and life they’ve built and carved out of the tough terrain of Spain. A story about a boy raised by women trying to find the man within himself by seeking out his Grandfather. It’s about old men and their old tales and the truths behind all those lies they tell. Here’s Vern with his take on one of my absolutely favorite films of 2002…

Hey man, just finished watching this roughcut of ALIEN VS. FREDDY that I downloaded. Man that movie sucked they even had timecode in the corner. Don’t worry though I won’t be filesharing it, people should be willing to pay to see movies. So I’m just gonna sell burns of it on e-bay.

Ha ha very funny anyway boys I just saw Alex de la Iglesia’s 800 BALAS (800 BULLETS to us) at the Cinerama. I’ve been waiting for this sucker for a while because I really enjoyed DAY OF THE BEAST and DYING OF LAUGHTER and I kind of liked PERDITA DURANGO too. Javier Bardem was such a nightmare in that movie, sporting a horrendous schlong, killing chickens and deciding one day hey, let’s go eat some white people. I was kind of surprised when he turned out to be a sex symbol. Same thing with Benicio del Toro. The ladies love him and the first shot in FEAR AND LOATHING IN LAS VEGAS is him pouring beer on his fat belly. 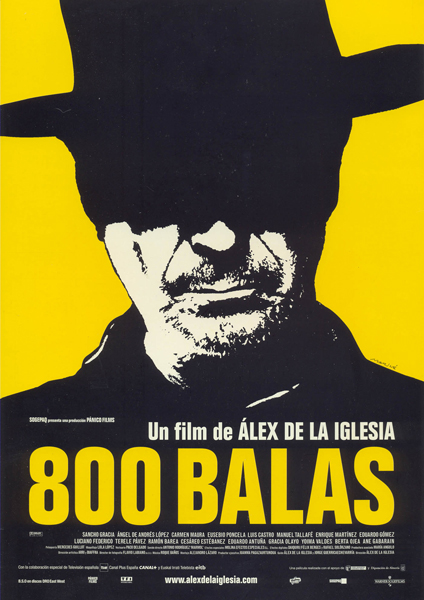 Anyway I gotta say 800 BULLETS wasn’t really what I was expecting. After the insanity and excess of Mr. de la Iglesia’s previous pictures, the title 800 BULLETS conjured up an over the top bloodbath. But the feel of it is more like a kid’s movie (but one that includes some naked prostitutes and revenge killings). They will have to tone it down a little when they play it on Nickelodeon I guess.

800 BULLETS is the story of a hyperactive kid named Carlos, maybe 10 years old, who is a handful for his single mother, a wealthy real estate developer who looks like Angelica Huston. (Actually she’s Carmen Maura.) One day the kid discovers that both his dead father and his estranged grandfather were stuntment in spaghetti westerns like 100 RIFLES and the man with no name trilogy. His mom doesn’t even want to talk about it so he sneaks away from a ski trip to go to “Hollywood, Texas,” a rundown tourist attraction where grandpa and other fake cowboys put on a western stunt show and display props from Hollywood productions that were filmed there.

Grandpa Julian is kind of a legend among the local stuntmen. He always brags that he wore Clint Eastwood’s poncho and drove the tank for George C. Scott in PATTON. But he’s still just a stuntman so most people don’t know of his accomplishments. The whole point of being a good stuntman is that they don’t know you’re there. He believes in never wasting an opportunity for fun, and this is why Carlos’ mom doesn’t talk to him. Or maybe it’s because her husband (Julian’s son) died doing a movie stunt with his dad.

So Carlos spends some time with Grandpa, doing stunts, going to bars and hanging out with prostitutes. There is a scene that some might find disturbing where a gorgeous prostitute teaches the kid to fondle her breast and then sleeps naked next to him. This reflects an earlier scene where grandpa went to bed with the girl but kept his clothes on and just slept next to her – meaning I guess that he’s just a kid at heart. I don’t know, I thought it was pretty innocent since the prostitute character herself is portrayed pretty much as a little girl in a grown woman’s body who doesn’t really know better.

Well the kid lucks out, mom never really finds out about the whores but she finds out Carlos has snuck off to spend time with Julian. She gets her revenge by buying out the property Hollywood, Texas is built on. Julian isn’t going to give up his lifestyle that easy so he replaces his stunt show blanks with the last 800 bullets in the village gun shop (get it, 800 bullets), puts on his sherriff’s badge, gets together his men and puts up a last stand. This is kind of a dark idea, a guy dressing up as a cowboy willing to shoot police to guard his former place of employment. When it comes down to it he’s not much different from the killer clown in FUNLAND or the nutballs you see on the news occasionally who go on a rampage with a samurai sword or some weird shit like that. But it’s portrayed sympathetically in the movie, and there’s not too much blood shed. And of course they work in a bunch of shots based on famous westerns, particularly of the Sergio Leone variety.

So it’s not really as crazy and unpredictable as most de la Iglesia pictures. It’s pretty much what you’d expect from a humorous light fantasy homage to the stuntmen of spaghetti westerns. But it’s a sweet little story paying loving respect to the history of international productions. And I really like the type of juxtapositions de la Iglesia sets up, like Carlos walking around an old west town wearing blue ski clothes and carrying a snowboard, or tourists posing with sherriff Julian as he stands frozen in shock, or the cowboys riding into the city with their full costumes. For most of the movie Julian acts like he really thinks he is a cowboy, so later when you see him wearing a suit and tie it is a huge shock. He takes a shot at handling things like a responsible adult, but it doesn’t work. So out come those 800 bullets.

There’s also a sequence I really liked where the cowboys have a huge drunken party where they all work their own stunt specialty into the revelry, like the guy in the noose stays in the noose for the party, another guy lights himself on fire, etc.

To me there was one major flaw but probaly most people won’t care. But I really hated some of the music. Obviously alot of it is just homages to Ennio Morricone’s scores, and that stuff works good. But there’s a couple parts, especially in the opening scenes, where the score is banging you over the head telling you how whimsical all this shit is, just like the worst american comedies. If they would just have the common decency to be subtle about it it would be funny, but you feel so much pressure to laugh that instead you want to tell the composer to stick it up his ass. Sorry composer I’m just being honest. Stick it up your ass.

Overall though I’d say it’s a good movie, and another reason to wonder why de la Iglesia isn’t better known in the US. Maybe because he turned down ALIEN RESURRECTION? Which brings me back to ALIEN VS. FREDDY. The aliens don’t dream so Freddy is completely powerless against them. But also Freddy only exists in dreams so they can’t get into his belly. It’s kind of a lame movie.

thanks boys, I got one more SIFF movie I’m going to tonight and then I will ride off into the sunset or whatever,

Alex de la Iglesia
This entry was posted on Saturday, June 14th, 2003 at 3:47 am and is filed under AICN, Comedy/Laffs, Reviews, SIFF. You can follow any responses to this entry through the RSS 2.0 feed. You can skip to the end and leave a response. Pinging is currently not allowed.

One Response to “SIFF: Vern on 800 BALAS by Alex de la Iglesia!”