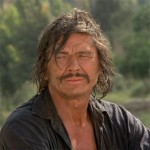 For part 3 Michael Winner stripped DEATH WISH down to its crudest elements. There was nowhere further to go within. So for THE CRACKDOWN new director J. Lee Thompson (GUNS OF THE NAVARONE, the last two PLANET OF THE APES movies, THE EVIL THAT MEN DO, tons of other shit) dresses it back up again. You know this right away from the opening which contains suspense, mood, atmosphere, build, surprise, and symbolism, all forbidden by part 3’s strict DOGME style rules.

Kersey is an architect again, and has a family again – another reporter girlfriend with a teenage daughter he regards as his own daughter (we know this because he says “I regard her as if she were my own daughter.”) Oh jesus, not more gang rape, right? 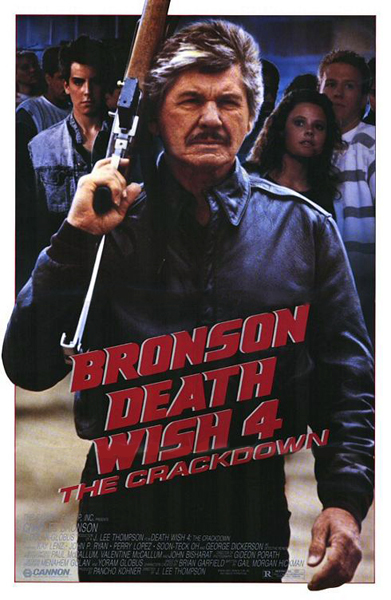 Well, we’re in luck. Kersey’s regarded-as-daughter dies not from an attack but from a cocaine overdose. Kersey follows her boyfriend to the video arcade/roller rink, sees him confront and get stabbed by their dealer, ends up shooting him so his body falls and gets shocked by the top of the bumper car rink.

The admirable thing about this sequel is that the only punk or “creep” in the whole movie is the guy who gives the cops a description of Kersey’s car after the arcade/roller rink shooting. Kersey goes after the organized crime figures who get rich off of the drugs that killed that girl. So finally the class conflict of DEATH WISH is reversed. It’s not this well-to-do architect going after poor people who dress funny. It’s Kersey vs. rich guys who wear suits and live in mansions or penthouse condos. And to enter their world he pretends to be the help, sneaking into a party as part of the catering staff, or pretending to be a worker at the drug front fishpacking plant.

This secret agent business wasn’t his idea. A rich guy recruited him. He knows about Kersey’s vigilante activities, claims his daughter was killed by drugs too, sort of forces/convinces Kersey to go after the kingpins. He gives Kersey intel (you hear it as narration) and supplies his equipment: sniper rifles, bombs, bugs, uzis, rocket launchers. Everything he needs for a crackdown.

So it’s a series of missions and the feel is kind of more THE MECHANIC than DEATH WISH. You start to wonder how he got so fuckin badass just from shooting muggers and being a medic in the Korean war. He does things that usually require a special ops backstory, like in the great scene where he tries to escape the fish plant with about 80-100 working stiffs coming after him. Somehow the comparitive slickness makes it seem more reasonable than part 3, but at times it’s just as ridiculous.

He also has a couple great one-liners. My favorite is when a gangster finds him in his kitchen, asks him what he’s doing there and he says he was gonna make a sandwich.

About the music, let me say this: the saxophone is a proud instrument. In jazz and funk it can steal the show. John Coltrane used it to channel the planets and the love supreme. Maceo Parker made it funkier than a fat man’s ass on a hot day on the bus. But in rock music and especially in action movie it is rarely dignified. This includes HARD BOILED. That may be one of the greatest action movies of all time, and playing the soprano saxophone may fulfill Tequila’s need for pre-babyholding badass juxtaposition, but that David Sanborn/Kenny G smooth jazz sound doesn’t cut it in my opinion. THE CRACKDOWN uses that type of saxophone sometimes, dating the movie. But I forgive it. In a strange way it’s kind of comforting, reminding you of a time when even a lesser action movie, a part 4, could be pretty good.

I know THE CRACKDOWN is not one of the more popular entries in the series, but I like it. I think they were smart to have Kersey’s strategy finally progress. Going after the heads of the gangs seems more likely to have an effect than going after street punks (although to be fair Bronson and Michael Winner had already shown this tactic as ineffective 15 years earlier in THE STONE KILLER). It also has a fun thriller structure (even if the twist is pretty easy to see coming) and lots of enjoyable action scenes. Keep it up, Kersey.

Cannon Films Charles Bronson vigilantes
This entry was posted on Friday, March 28th, 2008 at 11:25 am and is filed under Reviews, Thriller. You can follow any responses to this entry through the RSS 2.0 feed. You can skip to the end and leave a response. Pinging is currently not allowed.

3 Responses to “Death Wish 4: The Crackdown”