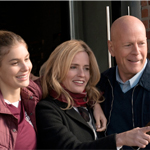 I was not immune to most of these concerns. But also I came to it as someone who enjoys the Charles-Bronson-starring DEATH WISHes 1, II, 3, 4: THE CRACKDOWN and V: THE FACE OF DEATH all in different ways, and has read both Death Wish by Brian Garfield and its sequel Death Sentence, and championed the movie (sort of) adapted from that book, and also read Bronson’s Loose!, the great DEATH WISH series making-of book by Paul Talbot, and have an interest in many rip-off vigilante and revenge movies. And also I have opinions about all of Roth’s films and about violence and politics in genre movies and in real life and I love Bruce Willis and want to see him restored to full Bruce powers. So I went in complicated. END_OF_DOCUMENT_TOKEN_TO_BE_REPLACED

There are a million reasons why Eli Roth’s DEATH WISH remake could be horrible. The trailer definitely leaves open the worry that it’s gonna be mainly about a white dude going around murdering black criminals for fun. In an interview I read somewhere, Roth was definitely conscious of that problem and wanted to be sure not to make a movie like that, so we’ll see how he handles it.

I can say that I have a friend who saw a test screening (I’m not sure if he’d want me to name him, so I won’t) and he was surprised to really like it. He assured me that Bruce is very good in it, it’s not one of his sleepwalking roles. So hopefully we’ll agree with him.

Either way, I hope they skip straight to a DEATH WISH 3 remake after this. This is three years later and Vega is settled in to a more normal life training boxers, with one particularly promising student Manny (Jeremy Ray Valdez) who is “almost like a son” to him and is about to have his first pro fight tomorrow. This will shock you to your very core and make you question everything you’ve ever believed, but the kid has gotten involved with some drug dealers who say he’s stealing and they murder him but the cops aren’t gonna do anything so Vega has to track them down and, I don’t know, trick them into getting on a bus so he can punch them, or whatever he does. END_OF_DOCUMENT_TOKEN_TO_BE_REPLACED

Part 2 in the SNAKE EATER saga came a couple years later, in 1991, and has a definite early ’90s vibe. In part 1 the goofiest obviously-painted-by-Canadian-production-assistants graffiti I noticed was the one that said “SUPER RAD,” in this one it was “RAP HEADS.” So times are a changin’. It opens in a school gym full of African-American youths in Nike “Just Do It” t-shirts doing double dutch while others practice kung fu nearby. All the kids are being overseen by a paroled ex-troublemaker named Speedboat, played by Larry B. Scott (he played Lamar, the gay guy in REVENGE OF THE NERDS). Speedboat tells all the kids they gotta get ready for “the tournament,” and we never find out if it’s a fighting tournament, a jump-roping tournament, or some combination of the two. Two of them suddenly fall down and die from some bad coke, and the shit is on. END_OF_DOCUMENT_TOKEN_TO_BE_REPLACED

In his latest, RECOIL, Steve Austin plays a little bit darker version of his usual screen persona. A little Stone Colder. He’s still an ex-cop who knows how to beat the shit out of people, still a stranger drifting into a small town and getting into trouble with the local criminals, still a scary-looking regular working man with a no bullshit attitude and an inherent sense of decency, but at least at the beginning he’s more of a Terminator than usual. He drives into Hope, WA in his black 1968 Plymouth GTX with 12 score marks burnt into his arm, apparently representing the number of killers and rapists he’s executed in his travels. He’s way ahead of the FBI, who want to put “24 hour surveillance” on a child killer before they figure out Stone Cold already “made abstract art out of him” 2 days ago. END_OF_DOCUMENT_TOKEN_TO_BE_REPLACED

Is SUPER HEROES a DECLINE OF WESTERN CIVILIZATION for the Nerd Age? This more-interesting-than-I-expected documentary takes a look at the burgeoning subculture of “Real Life Super Heroes,” people who create their own comic book inspired personas and costumes and “fight crime” (which seems to mostly mean walking around at night with other Real Life Super Heroes).

Seattle’s own Phoenix Jones is not represented. I’m not sure if this was filmed before his time or if he was too mysterious to be caught on camera. They do have a couple guys from Seattle, but one is just a fat guy in a t-shirt that says “Sky Man” on it. Another one carries a bow and arrow – what the fuck are you gonna do with that, shoot an arrow at some drunk guys fighting outside a club? Phoenix Jones got in trouble just using pepper spray. I don’t know about other cities, but I feel that Seattle is not bow-appropriate. END_OF_DOCUMENT_TOKEN_TO_BE_REPLACED

“What do you get if you cross ‘Animal House’ with ‘Death Wish’? Young Warriors– a unique combination of fraternity hijinks, high-speed action, wildly imaginative animation, and hard-drivin’ rock!” END_OF_DOCUMENT_TOKEN_TO_BE_REPLACED

SUPER is the landmark thirty-seventh movie about “what if somebody really tried to be a super hero?” But this one was made by James Gunn, the Troma guy turned SCOOBY DOO screenwriter who got some cred when he wrote the DAWN OF THE DEAD remake and then directed SLITHER. Looks like he’s had trouble getting anything off the ground since then (I guess the suits didn’t go for his take on Pepe Le Pew) so he made this one independently like he used to do, but maybe with some more skills and connections he’s made in the big leagues. For example the bit part of the lady at the pet store is played by Linda Cardellini from E.R., because she was Velma in SCOOBY DOO. (That was weird, I thought that character would come back or something, but no. She’s just a pet store lady.) END_OF_DOCUMENT_TOKEN_TO_BE_REPLACED

Hobo With a Shotgun

HOBO WITH A SHOTGUN – which came out this week on the dvd and the blu-ray – stars Rutger Hauer (BLIND FURY) as the titleistical armed derelict. I don’t think he ever gets a name, he’s just an old drunk who rides the rails into Hope City, better known as “Fuck City,” a small Canadian town overrun with barbaric crime and ruled savagely by a psychotic crimelord called “The Drake” (Bryan Downey) and his two douchebag sons, who I think are supposed to be modeled after Tom Cruise in RISKY BUSINESS. They wear sunglasses and letterman’s jackets but participate in public beheadings and sex slavery. Some of the cops are corrupt too, and one likes to serenade the local prostitutes with smooth come-ons like “You’re so hot I wanna cut off my dick and rub it all over your tits.” END_OF_DOCUMENT_TOKEN_TO_BE_REPLACED